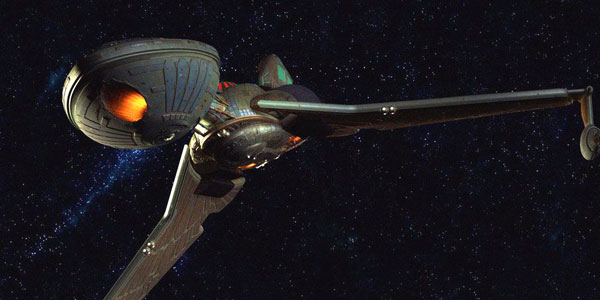 One of the most famed technological themes of science fiction is the ability to make ships and objects invisible. It was perhaps one of the greatest achievements in science fiction that Star Trek had made from since its beginnings. The Romulans had it. The Klingons had it. Even the Federation employed the cloaking device on three different series (“The Pegasus” on The Next Generation; “The Enterprise Incident” on The Original Series; any episode on Deep Space Nine in which the USS Defiant appears). But will we, Mankind, ever have it? Will scientists ever develop a cloaking device that could mask a ship against the background of glittering stars, or will our hopes and dreams for this technological revolution “vanish” into thin air?

The cloaking device has been described by characters on Star Trek as an energy field of tachyon radiation or other elementary particles that bends light around an object so that it appears invisible to the naked eye.

Physically speaking, a cloaked object isn’t really vanished or that the material on the object is transparent. Invisibility is an application of optics, the branch of physics that deals with light and all of its properties. If a cloaking device is to have any scientific credibility, the theoretical framework of such technology would be mired in our understanding of the behaviors of light and how it can be manipulated.

In order to make objects invisible, light traveling in the direction of the object must be able to bend around the object such that it would appear as though nothing was in its path. The image above shows how light rays (black curves) would have to be bent around the inner sphere to mask its presence. This is the cloaking effect. The object itself is not invisible; rather, it is made to appear invisible via an elaborate “optical illusion.” If an observer were to stand in front of the inner sphere, he/she would not see a sphere, but only the space behind it. Below is a more detailed explanation on how a cloaking shield might work on a Bird of Prey.

The image on the left shows a Bird of Prey without its cloaking shield. Light hits the hull of the ship and bounces off to reveal an image in view of an observer (Enterprise A); the reflection of the light rays can leave shadows in the path of the light beam’s propagation. With its cloaking shield activated (right), the object is made to appear invisible, theoretically of course, by passing light around the barrier and out the other side. No shadow is created, and while the Bird of Prey isn’t physically invisible, it appears invisible because the observer receives the photons from the original light sources as though they were never interfered upon by an object in their paths.

Unfortunately, there is no information available that could rationally explain the mechanisms of a cloaking “shield” in practice, let alone whether particle radiation could be propagated to form a “shield” in such a manner. Therefore, the above depiction of a cloaking shield in Star Trek may be more science fiction than actual science. However, the notion of a cloak of invisibility is not quite as far-fetched as one initially believes. The theory of the cloaking effect remains faithful to optical physics, so the development of the cloaking device is not impossible. In fact, scientists have already developed a similar cloaking apparatus, and the most exciting part is that it depends more on geometry and material sciences than it does on technology (meaning essentially that we do not need tachyons or radiation or hypothetical shields to make objects “invisible”).

Scientists at Duke University were able to use a series of rings that propagate radio waves around an object so that the radiation entering the ring structure pass through with little interference, essentially rendering the object less visible in the presence of radio waves.

The image on the left shows how radio waves (red and blue lines) behave when propagated against an uncloaked object. The radiation strikes the object and casts a shadow (the patch of green that appears to emanate from the center of the circle). Sensors are able to detect the shadow, which indicates that it is visible in presence of the radiation. When activated by an electrical current (right), the electromagnetically charged rings curve the radio wave around it without “touching” the object at the center of the ring. The majority of electromagnetic waves that hit the apparatus pass through with only minimal phase shifts. The shadow cast by the radiation is less noticeable when the cloak is active, making the object appear less visible in the presence of the radiation.

This YouTube video demonstrates the cloaking effect achieved by Duke University on a two-dimensional scale:

While objects can be made invisible to radio waves, it does not mean they are invisible to the naked eye, so this cloaking apparatus does not completely satisfy the invisibility cloak a Trekker would expect from Star Trek. Recently, however, science provided testament to the contrary. Researchers at the University of California, Berkeley developed a material (termed “meta-material”) of a specific geometrical design that refracts light at negative angles so that electromagnetic radiation (i.e. infrared radiation, visible light) could pass through with little or no phase shifts, meaning that the properties of light entering the material remains nearly the same as when it leaves the material. In layman’s terms: the object masked by this “meta-material” does not cast a “shadow” when placed in the path of light, so it is, for lack of a better word, “invisible.”

Scientists have only been successful with wavelengths in the infrared region of the electromagnetic spectrum (i.e. microwaves, radio waves), so a true cloak of invisibility has not been fully achieved. Nevertheless, this technology is the first step in making objects appear invisible to the naked eye, perhaps even in the near future.

In this YouTube video, the Associated Press interviews the Berkeley scientists that constructed the meta-material and applied it to cloak three-dimensional objects, a feat only previously achieved on two-dimensional objects and holds far-reaching implications on its use in the future.

In light of my analysis, I must rate the cloaking device as a Science Fact. The theory behind cloaking technology is based on real science, as did my previous topics of warp technology and antimatter reactors; however the difference here is that the cloaking device is much more practical and the experimental design of a cloak of invisibility has already been achieved. Of course, the technology is no where near perfect, and the structural array of meta-materials generated thus far have only been able to achieve a partial cloak in the presence of visible light. Nevertheless, modern technology is advancing much more quickly than it did ten years ago, so we may expect the development of a fully functional cloaking device to arrive much sooner than expected.

For more information on the discoveries made by the Berkeley researchers, visit this Science Daily article on the theoretical design of a cloaking device and its possible applications.

Tom Caldwell is upperclassman at UCLA, currently investigating functional kinases that down-regulate muscle growth and studying biochemistry with a career goal of earning a Ph.D. in molecular biology.