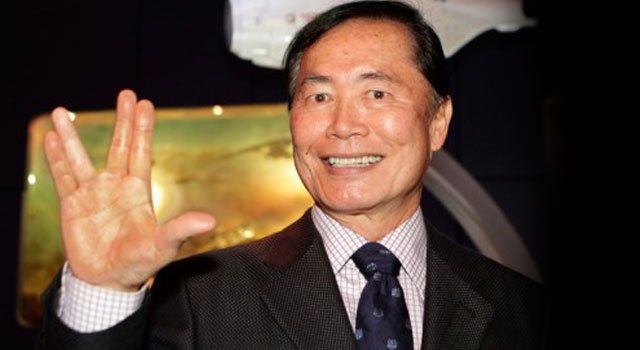 Beginning his fame as the U.S.S Enterprise’s original senior officer Hikaru Sulu, George Takei has taken to becoming one of the most diverse and multifaceted members of the original series cast. Acting as a gay rights activist, philanthropist for Asian cultural centers, as well as internet humor personality, Takei celebrated his 75th birthday on Friday by speaking at a fundraiser for the Japanese Canadian Cultural Centre in Toronto.

“I am celebrating my seventy-fifth birthday in the way that I’ve spent most of my life,” said the actor in a recent interview “Raising funds for good causes.” Takei told Moviefone.

An intelligent and historically aware man, Takei acknowledges that his birthday doesn’t come without its share of baggage “It’s also Hitler’s birthday.” the actor said of spending the day at a charity event. “I share that birthday with the blackest villain in history and I have to be particularly good in this life in order to make up for that.” He also acknowledged that it is also the anniversary of the Columbine Massacre. “If only my mother could have held me a little longer or pushed me out a little bit earlier.” the actor joked.

Along with attending the charity event, Takei also used the occasion to post blog entry reminding people of the World War Two Japanese-American internment camps, one of which he was placed in at a very young age.

“I am one of an ever-shrinking number of survivors of the internment,” Takei wrote. “which resulted in the incarceration, without charges or due process, of over 120,000 Americans of Japanese ancestry.”

Takei will be starring in an upcoming musical called Allegiance, which as he says in a recent video “Will, for the first time, deal with Japanese Americans during the Second World War.” He then, as thanks for his fans helping him raise over $150,000 for the production, did what he called “his happy dance” “With reluctant permission from my husband Brad.” he added with a wink.

“We owe so much to Gene, he was such a visionary.” Takei said of Star Trek‘s creator, Gene Roddenberry. “So much of what he envisioned has become reality today. We are literally living in a science fiction world today. What Gene used to say, and reminded us constantly, was that the Starship Enterprise was a metaphor for Starship Earth, and the strength of these starships lay in its diversity coming together and working in concert to face a common challenge. Technology has bound us together where we are literally now a global society, a global culture, a global economy and a global politics.” he said.

“Back in the ’60s we were frozen in the coldest of Cold Wars — the Soviet Union and the United States threatening each other with mutual nuclear annihilation. Today, we have the international space station, and the crew of that space station come from all over this planet.”

“So much of what Gene envisioned, as an aspiration, has become reality today. We are all tied together by this thing called the Internet. I can send emails to someone in Europe or Latin America or Asia. And we’re now talking to each other like they’re on the next block. We are a global society, something that Gene Roddenberry envisioned. ”

Takei’s resurgence popularity-culture came at the hands of an unlikely appearance on Howard Stern’s radio show in the 1990s. After making several appearances, he became the show’s “official announcer” in 2006, when it moved to Sirius satellite radio.

“Howard can be both outrageous and munificent. Going on speaking tours to colleges, on equality for the LGBT community is good and necessary, but it’s more or less speaking to the choir. When Howard gave me that invitation to become his “official announcer,” I accepted because I thought he would give me access to a whole different audience, that are decent and fair-minded, but don’t think about issues like equality for the LGBT community. He has an amazing reach and he gave me the opportunity to say to these people that we are all members of your families. We’re literally your sons and daughters, brothers and sisters, aunts and uncles, we’re literally kin. We’re your flesh and blood, and that made a lot of people think.” 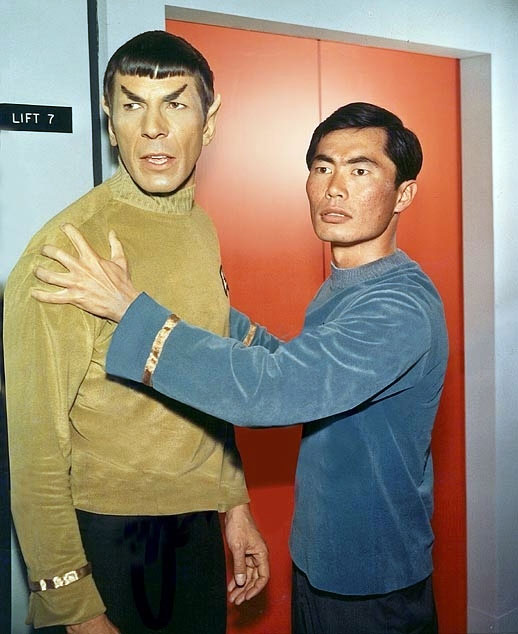 Takei with Leonard Nimoy on the set of Star Trek

“After about three or four months on the Howard Stern Show, I started getting letters from people who identified themselves as straight, married, male, some Republicans, some Democrats, and they said I made sense and they would be supportive of LGBT equality. I was very touched by that and I owe that in large part to Howard. So, if it’s comparing Bill Shatner and Howard Stern, most definitely Howard Stern has been more outrageous, but he gave me the kind of opportunity that I never dreamed of. Bill has never given me that, only grief.” he said with a laugh. 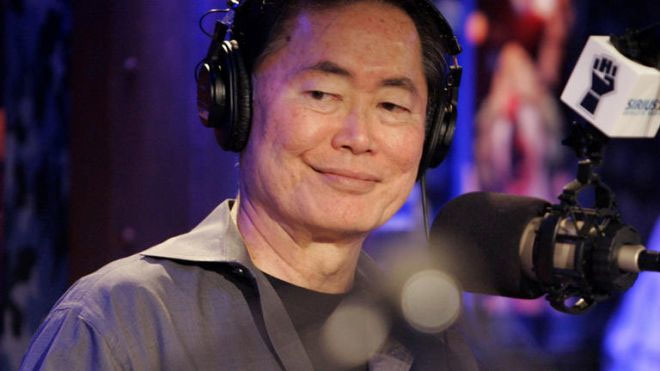