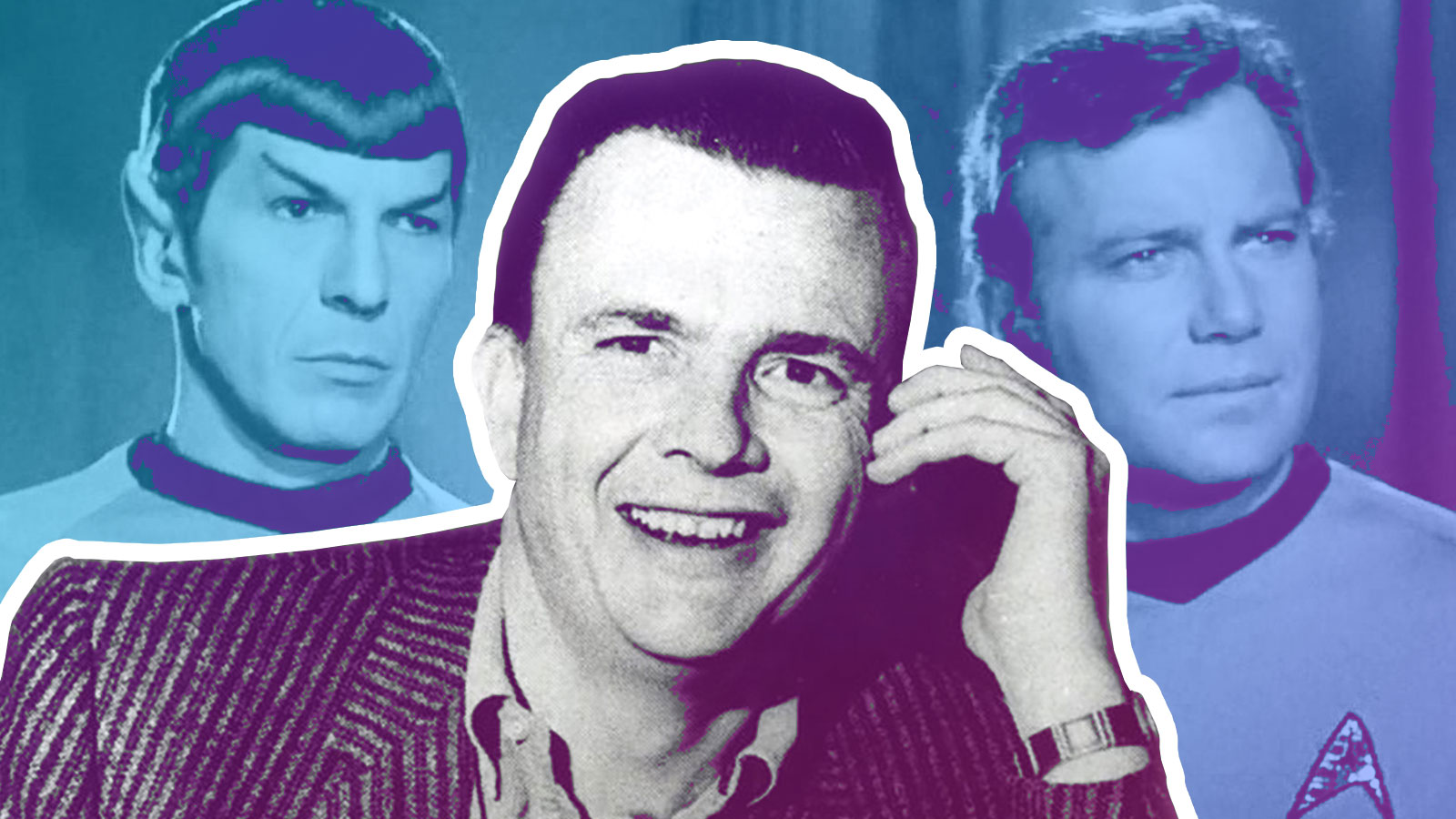 I’ve been watching eagerly as Star Trek: Discovery ushers in a new era of Trek on TV. It’s done so by simultaneously honoring a 50-year legacy and breaking new ground. Discovery is Star Trek — updated for 2017.

When we talk about updating Star Trek, what we’re actually talking about is the modernization of a few key elements. We could argue all the way to the Delta Quadrant about the definitive number of these elements. Irrespective of what that number actually is, chief among them are the Prime Directive, Starfleet, Vulcans, warp drive, transporters, the United Federation of Planets, Tribbles, the Captain’s Chair, and of course Klingons. These are Trek’s base elements; its iconography – what separates Star Trek from other fictional universes.

But in listing Trek’s fundamental elements, all of which Discovery has updated, one notices that most share a common denominator: Gene L. Coon.

‘Trek’s other Gene,’ Coon is credited for the Klingons, the Prime Directive, the terms Starfleet Command and United Federation of Planets, and more. He also wrote, polished, or contributed to the scripts for many of The Original Series’ most iconic episodes, including “Arena,” “Space Seed,” “The Devil in the Dark,” “The City on the Edge of Forever,” “Mirror, Mirror,” and “The Trouble With Tribbles.” Gene Roddenberry created Star Trek. But take out Coon, and Star Trek wouldn’t be Star Trek.

With so many of Coon’s creations getting a Discovery update, I thought it appropriate to revisit the man and his impact on Star Trek. When I asked him about Coon, Mark Altman, noted TV producer and co-author of the oral history “Star Trek, The Fifty Year Mission,” wrote me that “it was Shatner who once said to me in an interview that ‘Gene Coon had more to do with infusing life into Star Trek than anyone else’ and he’s right.”

By the time he was hired on Star Trek, Coon was a television veteran. The Nebraska native, who fought in World War II and the Korean War, spent the 1950s and 60s writing for a range of popular shows including “Bonanza,” “Zorro,” “Dragnet,” and “Have Gun Will Travel.” He was an incredibly efficient writer, usually producing ready to shoot scripts in days – this was, at times, according to his longtime assistant, Ande Richardson, due to his habit of popping amphetamines.

Gene Roddenberry hired Coon in August 1966 to contribute stories and help oversee Trek’s production. Coon worked full-time on Star Trek from the first-season episode “Miri” to the second season’s “A Private Little War,” and would go on to contribute periodically to Trek’s third season under the pseudonym ‘Lee Cronin.’ He left the show in the second season due to exhaustion and to personal clashes with Roddenberry. Among their disagreements was Roddenberry’s dislike of how Coon regularly injected the show with comedy and lighthearted banter; the iconic Spock/McCoy dynamic was shepherded by Coon.

Coon died in 1973, at the age of 49, from lung cancer. “He died before Star Trek blossomed on syndication,” notes celebrated Star Trek author, and 20-year columnist for Star Trek Magazine, Larry Nemecek, “he missed out on things like those first conventions and the second wave of the show’s popularity. Sadly, he passed away before he could see the incredible rebirth that was about to come.”

Although he only worked on Star Trek for under two years (a blip in Trek’s 50+ year history) Coon’s impact on the franchise, and on popular culture, is worthy of a Klingon opera.

“After Gene Roddenberry, I don’t know that we would have Star Trek without Gene Coon,” continues Nemecek, “Coon helped to mature the show on screen and behind the scenes. He was the driving force for a good chunk of the first and second season – he nurtured the humor, the character dynamics, and the day-to-day reality of the show. He created so much of what we love about Star Trek.”

Coon’s work elevated Roddenberry’s creation. So fundamental were Coon’s contributions to Trek that every incarnation of the show since TOS deepens, expands, or replicates his ideas. “Even from beyond the grave,” adds Nemecek, “Coon’s impact on Star Trek is tremendous.”

The fingerprints of this sadly under-recognized luminary of Trek lore are rightly found all over Discovery. In fact, much of the fan chatter about Discovery to date is about how the new show updates Trek’s key elements (we fans will argue about the Klingon’s Discovery look from now until the 23rd century). The show, while taking great pains to chart a new course in terms of story and characters, still pays tribute to each and every one of Coon’s ideas and stories. From Klingons to Starfleet to the Mirror Universe, Coon’s impact on Trek is alive and well in 2017. “Every Star Trek is built on the back of Coon’s genius. Look at the Tartigrade in Discovery,” adds Altman, “that’s a vintage ‘Devil in the Dark’ story in a sense revisited for another generation.”

Coon did not create Star Trek. But he did inject the show with its humanity. His stories and contributions were a large part of what people loved about the show. It’s arguably why the letter-writing campaign, in the late 1960s, led by Bjo and John Trimble, saved the show from cancellation and secured its third season. “Coon’s work made Star Trek worth saving,” concludes Nemecek. And it did: Star Trek thrives today, in the form of Discovery, in large part because of Gene L. Coon.

I’d like to extend a special thanks to Mark Altman and Larry Nemecek for speaking with me about Coon. If you’re interested in learning more about Trek’s Other Gene, I couldn’t recommend Mark and Ed Gross’ two-part oral history of the franchise – Star Trek, The Fifty Year Mission – enough. If you want to deep dive into all things Trek, make sure that you visit Larry’s Portal47.net and that you keep an ear out for his Trek Files podcast coming soon to the Roddenberry Podcast Network. LLAP!