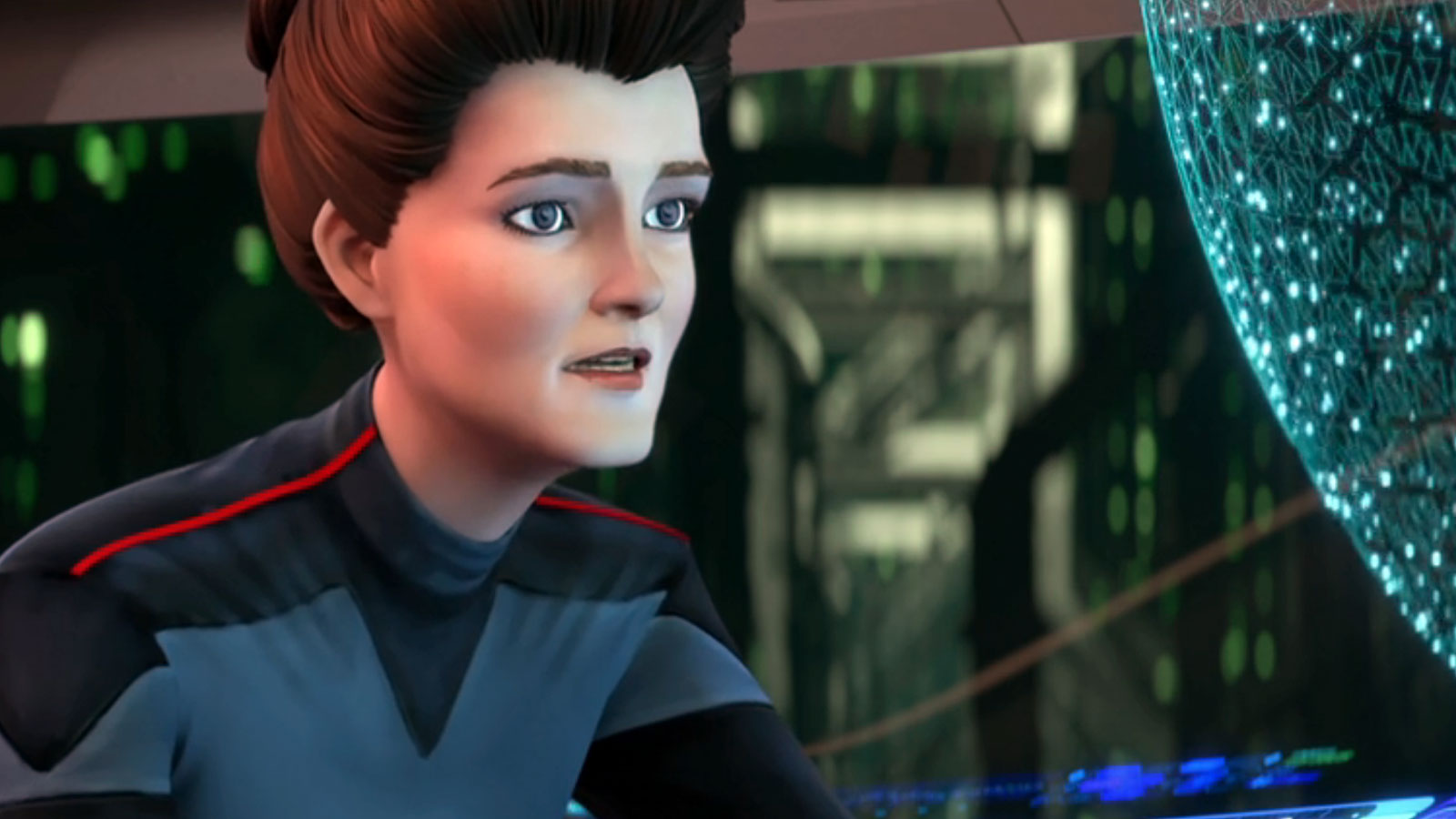 “Let Sleeping Borg Lie” sees the crew of the Protostar retreat from their original plan of seeking the Federation as they discover their ship is a weapon designed to bring the famed alliance to its knees – and not even the Borg know how to handle the ultra-advanced weapon.

After Gwyn (Ella Purnell) explains to the crew what her father was aiming to use the Protostar for – the destruction of the Federation from the inside out – the crew searches the ship from top to bottom to find the elusive weapon. It turns out a hidden keyhole on the starship’s bridge fits Gwyn’s heirloom perfectly, allowing the crew to journey to a secret area under the bridge where the mysterious weapon from the future is held.

Not even a phaser blast can destroy the seemingly alive weapon, so the crew is at a loss as to what to do; that is, until an incredibly fortuitous event happens: they come face-to-face with a dormant Borg Cube. Hologram Janeway (Kate Mulgrew), someone with plenty of experience dealing with the Borg, advises the crew to run away while they can, but Captain Dal (Brett Gray) and Gwyn reason that since the Borg learn how to adapt to various threats, they should be able to know how to deal with the weapon at the heart of the Protostar.

The crew lands on the Borg Cube, but the only way they think they can get Borg knowledge is if one of them gets assimilated, a hard-to-swallow recommendation until Zero (Angus Imrie) asserts they have experience in collective consciousnesses. So, Zero takes the chance, and we want to note here that Imrie delivers a fantastically emotive performance in this episode. Zero seems perfectly afraid to join with the Borg, but courageous enough to want to try. After all, they are still frustrated and hurt that they have harmed the crew in the recent past; after the incident on the holodeck in the mid-season finale last year, Zero is apt to focus only on helping people.

Zero runs into more trouble than they were expecting in the Borg collective, however. The Borg do indeed know of the weapon onboard the Protostar (they call it the “living construct” and they know it’s a threat to the Federation) but they ultimately don’t know how to deal with it. Not a good sign, but sensible considering the weapon is from the future. Moreover, Zero is captured and assimilated into the collective despite their efforts to resist, which means trouble for the rest of the Protostar crew as they start fighting their way out of the Cube. Eventually, the crew is captured by the Borg, and an assimilated Zero is conveniently first in line to torture and/or assimilate them.

“”There is no Zero. Zero hurt you. Endangered you. Now Zero is Borg.”

“Well, the Borg are making you hurt us. That’s not the Zero I know.”

It’s only when the soft-spoken Gwyn calmly but assertively reminds Zero who they really are, and how it’s their mission not to hurt anyone anymore, that Zero breaks out of the assimilation daze and helps the crew escape. We weren’t aware that someone could be persuaded out of being assimilated, no matter how strong the will of that person is, but alas the crew is able to return to the Protostar and get out of dodge.

Having Zero assimilated into the Borg Collective offers not only a great lesson of the week to viewers but also a sensible progression to Zero’s emotional woes since the mid-season finale. The lesson here is that a collective of unique individuals, bound by friendship, love, and respect, can overcome even the most daunting obstacle, including a collective that is objectively bigger and smarter. Zero’s journey thus far since their damaging experience on the holodeck is one of self-reflection and self-healing, and being assimilated temporarily into the Borg Collective is an unexpected but practical way to help the Medusan realize what a gift their crew actually is. Moving forward, Zero realizes their mission in life is to save people, much like their ship can despite the weapon hidden below decks.

Meanwhile, in another part of space, Admiral Janeway and her crew, which we now see include Doctor Noum (Jason Alexander) and Ensign Asencia (Jameela Jamil), are trying to revive the unconscious Diviner (John Noble). As far as character introductions go, the Dauntless scenes in “Let Sleeping Borg Lie” are fairly hit or miss.

Asencia seems to be a pleasant up-and-coming ensign with plenty of brains, but Noum is fairly off-putting. For example, when Asencia smartly suggests replicating the life-saving technology in the Diviner’s suit so he could possibly be revived on the Dauntless, Noum misconstrues her suggestion as her sucking up to Janeway, which we think is a disingenuous read on the conversation. It seems like this episode tries too quickly to assert Noum as a hate-him-so-much-you-love-him type of character who we are told is brilliant, instead of being shown. Of course, our sense of these new characters is only based on the few minutes we see of them in this episode, so we’re sure our assessments will change one way or the other. In any case, the crew of the Dauntless, having just discovered the destroyed space station from last week’s episode, will soon have their hands full with a revived Diviner. Who knows how he will react to being in the hands of the Federation, his sworn enemy, or how he will try to get back to the Protostar.

As long as Prodigy gives us reason to do so, we’ll keep praising the show’s incredible aesthetic. The interior of the Borg ship looks incredible, so much so that we are constantly amazed this is technically a show for kids. When Alex Kurtzman said at the New York Comic-Con in October that Prodigy’s creators, Dan and Kevin Hageman, apply a level of perfectionism to every frame of this show, he wasn’t kidding. Clearly, this show is designed for repeated viewing, as many parents are subject to whatever show their kids enjoy. There’s just so much attention to detail that this show demands rewatches.

Taken together, “Let Sleeping Borg Lie” presents a new direction for our crew – away from Starfleet and back into the unknown – but accomplishes this with a glaringly noticeable plot weakness. Space is big, folks! The fact that the crew stumble upon a Borg Cube so luckily sucked us out of the adventure and suspended our sense of disbelief, and we were only brought back in thanks to this episode’s incredible visual allure and the heart-filled lesson of the week. What the run-in with the Borg did accomplish, however, was expressing an effective parallel between Zero’s journey and our crew’s, so in the end, we can’t be too disgruntled at this otherwise enjoyable episode.