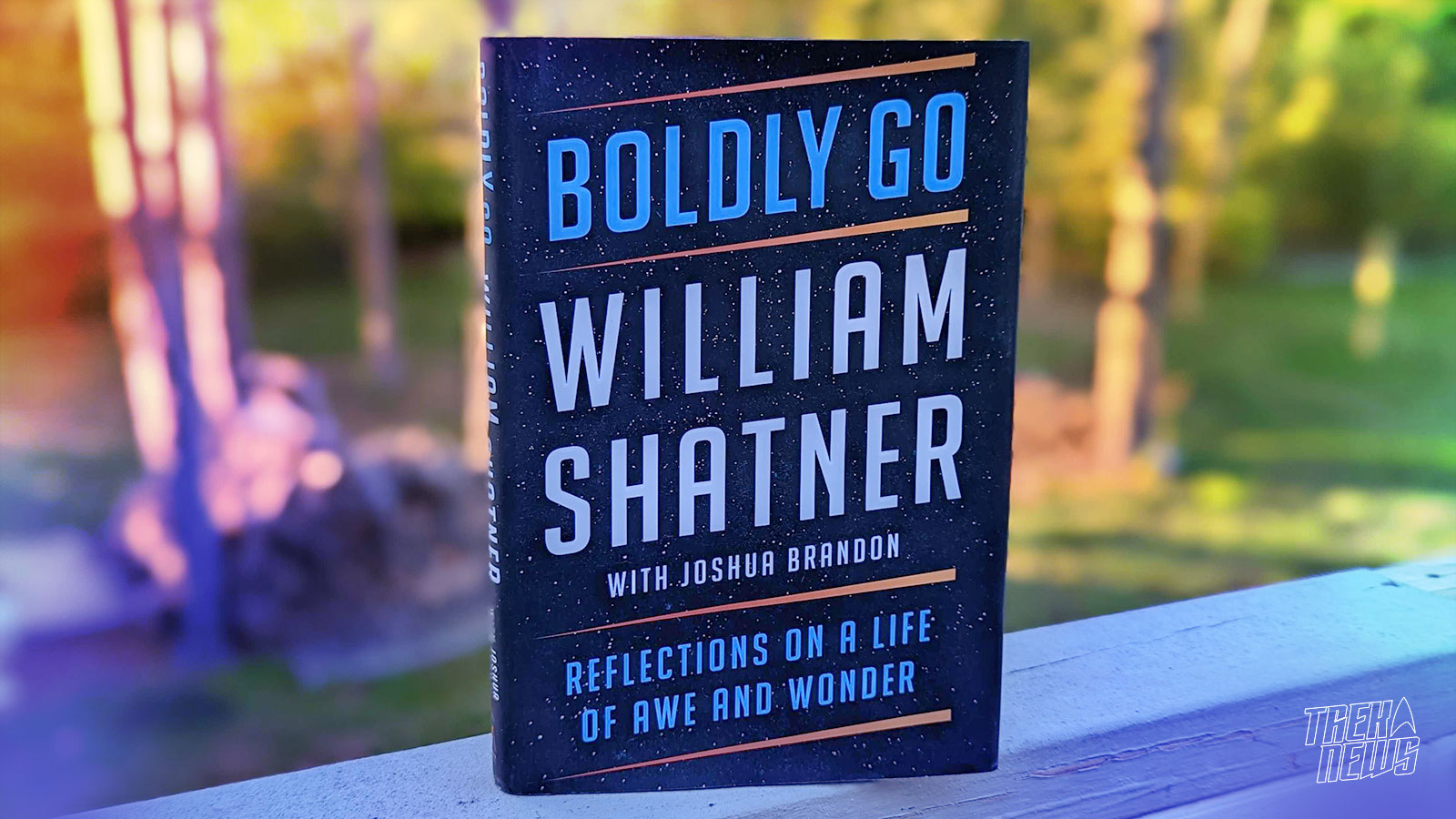 Review: William Shatner’s Boldly Go: Reflections on a Life of Awe and Wonder

William Shatner is back on bookshelves with an autobiography that feels a bit too familiar to his previous literary effort, but ultimately includes fresh-enough insights and recounts from his 91-year-long life to warrant an entertaining readthrough.

Generic title aside, the extraordinary thing about this book is that you don’t need to be a Star Trek fan to appreciate Shatner’s thoughts – in fact, precious little of this book actually discusses or references Star Trek at all. This paragraph from our review of his aforementioned autobiography fits perfectly for Boldly Go:

“Don’t expect the book to be a look back at his time in Star Trek. There are plenty of books that already do that (including Up Till Now). Instead, Shatner opts for the same conversational approach to life advice and wisdom that his character, Denny Crane, did on Boston Legal. Imagine yourself on a balcony with Shatner, with cigars and drinks in hand, and just… sharing. He isn’t on the bridge of a starship this time. He is on a balcony, and he’s peering out not the ups and downs of buildings on a city skyline, but the ups and downs of his life. That’s what reading this book is like, and there are plenty of memorable stories and lessons in the book’s 200+ pages to make it worth the read.”

Actually, most of our review about the style and substance of that 2018 book could fit this new release, so you could tell what we mean when we say the two books are quite similar. In both releases, Shatner compiles his thoughts on various topics and uses his own life to explain why he thinks or feels a certain way.  For what it’s worth though, Shatner has been quite active in the three years since his previous book. As he structures this new book around particular themes, such as our place in the universe, the binds that draw families together, his mortality, his love of music and making music, etc., he often draws on fresher experiences and some rarer recollections from across his life to illustrate his view of the world.

An example of these fresher recollections includes leaving Earth. Likely the most impactful event for him in the last few years (and certainly also his entire life) was seeing Earth from space, as he did in 2021 (which was chronicled in a documentary). Shatner elaborates at length about his space-going experience in this new book, and uses that extraordinary encounter to frame and contextualize his well-thought and well-articulated views on life, Earth, and the interconnectedness of all living things. And boy does he have some thoughts about this interconnectedness.

Shatner’s self-described spirituality, developed over the course of his life, is a cornerstone of this book. The man has had a couple of lifetime’s worth of experiences from which to populate his existence, and seemingly one of the most notable evolutions as a human being through all those decades is his oneness with the Earth and its living things. This theme permeates the book. In fact, Shatner describes how he is such a nature lover, such an admirer of the universe, and such a believer that all living things can coexist, that the moment in his life he regrets the most is when he shot a bear with a bow and arrow on an episode of The American Sportsman back in the 1970s. Think about that: the thing he regrets most in life was killing another animal purely for sport, once. If that’s not an indication of his life’s passion, we don’t know what is.

If there’s one description that can be attributed to Shatner after reading this book, it’s aware. He is aware of the fragility of life and his precious place in it. Painfully aware that he has far more days behind him than ahead. And aware of himself: he is a man who enjoys challenges, seeks out knowledge, and is never satisfied with staying still. As he describes, “Knowledge feeds me. It’s as necessary to my existence as oxygen.” At 91 years old, we imagine one would know themselves pretty well, and it’s to his credit that Shatner opens up so much about who he is and his experience living the human condition.

Those who have kept up to date with Shatner’s autobiographies will feel like they know the man, and this book only adds to this perception. He doesn’t shy away from airing his thoughts for all to hear or read, and oftentimes it’s easy to take his wisdom as having a lot of weight; after all, he states early in this book, “Well, I’m ninety-one years old; how old are you?”

So, it’s easy to recommend Boldly Go to those who take value in Shatner’s experience, and to those who haven’t read his previous autobiographies. The conversational nature of this book, no doubt thanks to co-author Joshua Brandon, makes it an easy and quick read. There are plenty of noteworthy memories Shatner draws upon to help the reader absorb the man’s learnings and thoughts, some of which are new to this book, including thoughts about why he had a strained relationship with Leonard Nimoy in the actor’s final days, and fresh recollections about the passing of his wife, Nerene). Shatner plumbs the depths of his considerable life to engage the reader – from his childhood and earliest days of acting to living in a pandemic world – to explain the life lessons he has learned, how people should view the Earth, and why it’s important to love and cherish each together.

“My point is there is beauty all around us, and there is something ineffable about taking it all in – including the weeds – especially when you stand back to contemplate that those weeds are made of the exact same ‘star stuff’ as we are…”

As much as Shatner asserts he has learned and done so much in his life, he also isn’t content to rest. While he maintains in this book that his most recent album, Bill (which we praised), is a perfectly illustrative capstone to his life, he uses lyrics from yet another upcoming album to further describe his personal beliefs and experiences – including what he has planned for when he dies. So, those hardcore fans who track every one of Shatner’s works can rest assured there’s another album in the works – although is anybody surprised?

Boldly Go was an enjoyable read that Shatner fans will certainly gain value in picking up. If it’s not clear by now, Shatner is much more than just an actor from Star Trek. His life has brought him all over the world for a near-unmatched breadth of experiences. Yes, this book does repeat some well-known stories Shatner himself has told, but it also introduces new stories into the Shatner mythos. These new tidbits, along with Shatner’s inspirational and influential continued awe at the world we live in, makes Boldly Go worth a look.

You can buy Boldly Go: Reflections on a Life of Awe and Wonder on Amazon now.