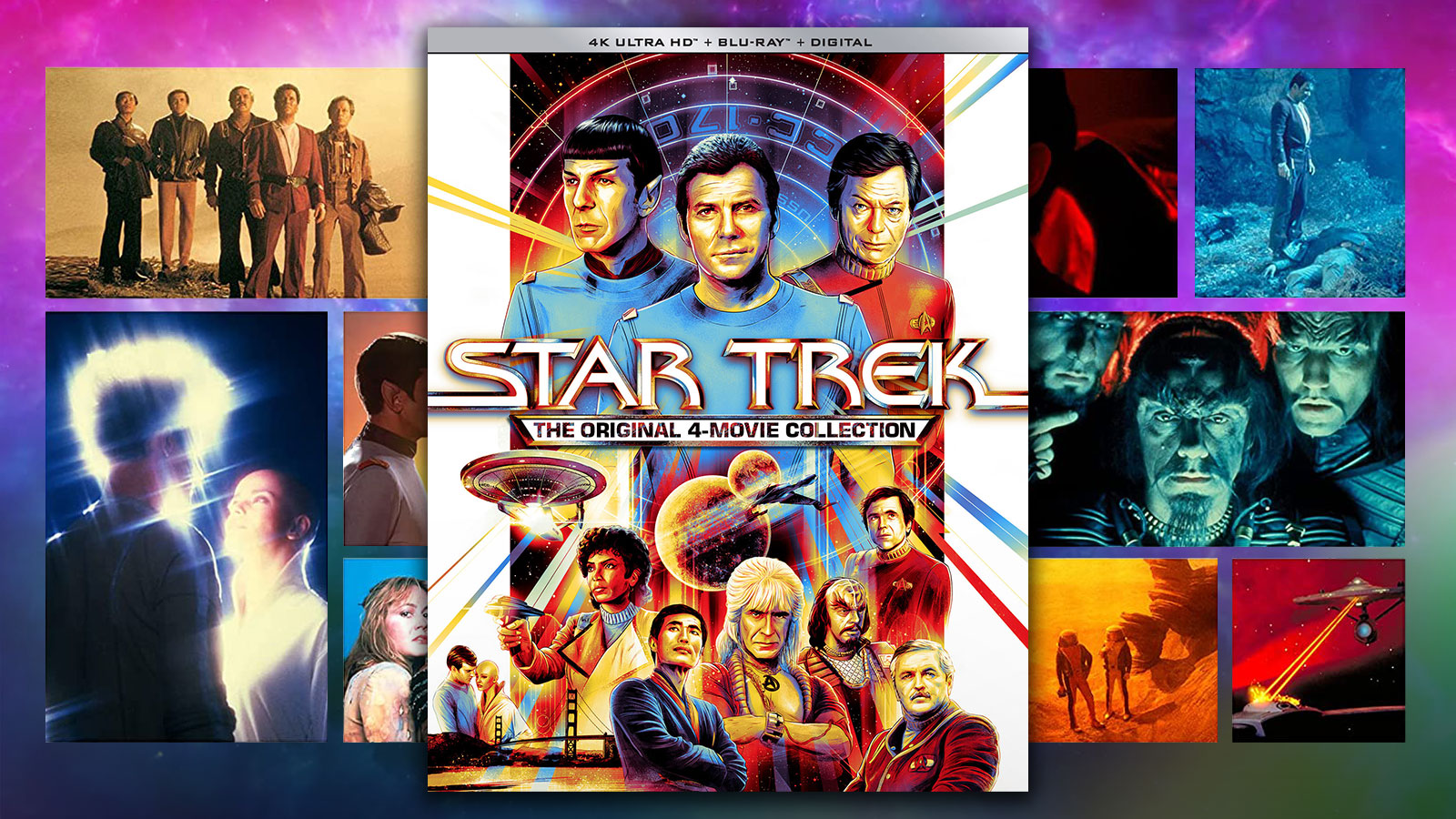 Watching Star Trek movies in the best currently available display options – 4K and high dynamic range (HDR) – has been a long time coming. 4K Blu-ray discs have been around for a few years now, but classic Star Trek movies have lacked any 4K presentations, save for the Director’s Cut of The Wrath of Khan from 2016. Now in time for the franchise’s 55th anniversary, Paramount Home Entertainment is gracing us with 4K/HDR versions of the first four Star Trek movies, meaning this is the first time you can watch The Motion Picture, The Search for Spock, and The Voyage Home in 4K.

It’s a great milestone to celebrate, but what’s equally worth celebrating is that these transfers do a remarkable service to these movies.

What’s in the box?

Let’s start with what’s in the package. The Star Trek: The Original 4-Movie Collection includes three ways to watch these movies:

It’s worth noting that The Motion Picture in this collection is the theatrical cut, not the Director’s Edition. You’ll have to wait for the upcoming remastered Director’s Edition if you want to see that version in 4K. This collection does include the Director’s Cut of The Wrath of Khan as well as the theatrical version, so you get to choose which one you want to watch. Star Trek III and Star Trek IV are presented in their original theatrical cuts.

Our main question upon slipping these movies into our Blu-ray players: how does the visual quality of these releases compare to the existing versions of these movies? Well, we’re happy to report that these films look great. Of course, you expect a quality increase because you’re seeing more visual data than ever before, but the addition of HDR, assuming you have an HDR-capable TV, adds so much more depth to these movies. After all, you’re seeing a wider gamut of colors than previously possible. In our opinion, seeing these movies in HDR is just as important as seeing them in 4K.

Since we here at TrekNews.net have a soft spot for The Motion Picture, we’d like to point to that movie as a fantastic illustration of how these films have transferred to 4K/HDR. For example, we found ourselves enthralled watching some of the slower, previously nap-inducing V’Ger approach sequences because V’Ger’s model work and visual effects just look amazing. The surface detail on the ship itself is much sharper than we remember it being on the DVD or even the previously released 1080p Blu-ray, and the increase in color gamut really shows off the trippy 1970s, 2001: A Space Odyssey-esque sci-fi aesthetic.

Additionally, surface textures for the movie’s various sets and costumes stand out more than ever – rest assured that your eyes will be plenty busy absorbing all the movie’s detail, especially from some of the larger sets. While the increased resolution is overall a welcome improvement, it does mean that a staple of pre-CGI visual effects – matte lines – stand out a bit more. You’ll notice these lines as black outlines around ship models. We totally don’t mind the slightly distracting presence of these outlines, as they are a somewhat nostalgia staple of classic television, but don’t be surprised if you notice them a bit more.

The other perk of this release is that you can toggle the Dolby 2.0 isolated score at any time, which means you can watch the movie and hear only the soundtrack. Audiophiles will love this feature, and it’s a special treat in The Motion Picture thanks to Jeffrey Goldsmith’s classic, epic score. This feature is only available for The Motion Picture. We should note that this isolated score is the only new extra in this 2021 release for any of the included movies. Every other special feature was previously released (including the commentary, which is still super interesting if you haven’t listened to it), so if you’re looking for new special features, this package isn’t for you.

Please note: The 4K screencaps have not been captured

What about the extras?

Here’s a list of all the included special features in this collection, which you can see is pretty inclusive:

The Wrath of Khan 4K Blu-ray:

The Wrath of Khan Blu-ray:

The Search for Spock 4K Blu-ray:

The Search for Spock Blu-ray:

While we’ve spoken highly of the first movie, it’s not just The Motion Picture that benefits from increased visual clarity (but it does perhaps benefit the most thanks to its age). Watching the classic The Wrath of Khan and seeing the Enterprise and Reliant fight in the Mutara Nebula is better than ever thanks to HDR; the escape sequence from Spacedock in The Search for Spock is even cooler to watch when both the Excelsior, Spacedock, and Enterprise are seen in such exquisite detail; and seeing 1986’s San Francisco in The Voyage Home in 4K pulls you more into the setting than ever before.

The release of these films also feature a strikingly different color grade than previous releases. If you compare the 2009 Blu-ray release of these movies with this new package, you’ll notice colors take on a more natural tone than before. Whoever mastered the 2009 discs clearly favored a more purplish and bluish color grade, leading to some scenes looking cold or out-of-place. A notable example we found when doing our watch-through was at the end of The Voyage Home when the Enterprise comes out of Spacedock. Do you remember the ship looking like it was almost totally cast in shadow, and the deflector dish looking a bit too acutely blue? That shot is totally different now thanks to the more normalized color grading. Rest assured that Star Trek: The Original 4-Movie Collection presents these films’ colors in the best, most natural way we can hope for.

Star Trek: The Original 4-Movie Collection does a great service to these classic movies and accomplishes admirably what the project set out to do: bring these films into the 4K-era. If you want the definitive way of watching these movies, this collection is for you. If you were picking this up hoping for a refreshed selection of special features, you’ll be disappointed, as the only new feature is the aforementioned isolated track for The Motion Picture. Moreover, if we’re waiting for Paramount to release a definitive collection of all the TOS-era films, you’ll have to wait a bit longer. While no announcement has been made about the last two TOS films getting the 4K/HDR treatment, we imagine that it has to happen at some point. After seeing the first four movies shine in 4K/HDR, it’s hard to imagine Paramount wouldn’t complete the collection. For now, definitely add this release to your home media collection.