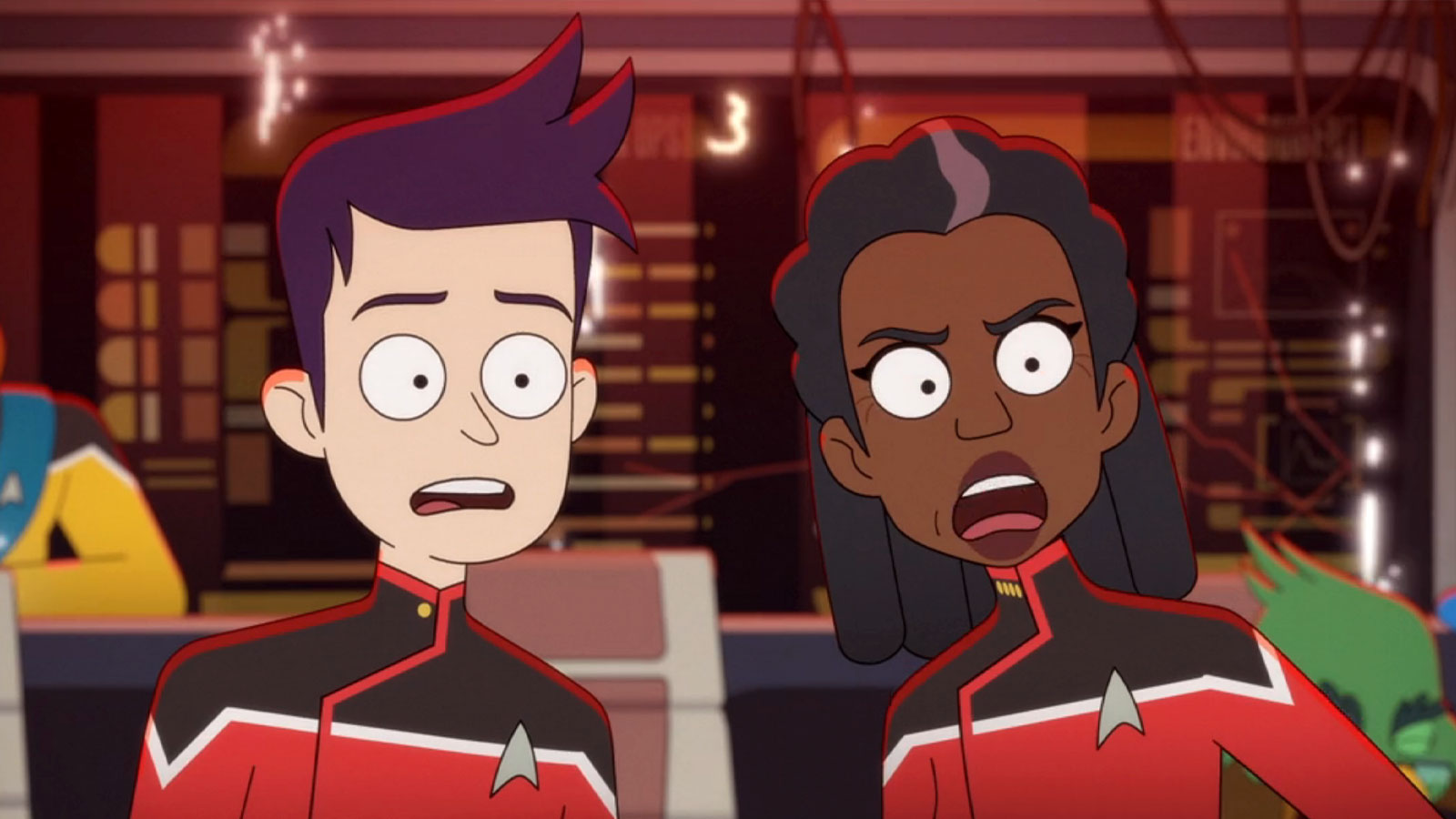 Star Trek: Lower Decks polishes off its strongest season yet with an explosive finale from writer and series creator Mike McMahan that highlights to great effect the wonderfully complex tapestry this three-season show has created for itself.

In the aftermath of the media blowup from the previous episode, Captain Carol Freeman (Dawnn Lewis) and her crew are facing a dire predicament: the retirement of the California-class ships in favor of Admiral Les Buenamigo’s (Carlos Alazraqui) new autonomous Texas-class fleet. This proposal really bothers Freeman, who believes a flesh-and-blood crew are superior to Buenamigo’s passion project, but there seems to be only one way to find out: a contest between the Cerritos and the Aledo of which ship can best complete a series of three second contact missions. Such missions, after all, are the original purpose of the California class.

Departing from Douglas Station, the two ships begin the contest by visiting Galardon, as seen previously in the series premiere “Second Contact,” and they both complete the mission in great time. On the second planet, LT-358, the Cerritos falls behind when Ensign D’Vana Tendi (Noel Wells) discovers the barren planet may be harboring sentient life, something the Aledo doesn’t even realize as it continues to the third planet. Tendi’s lead seems to be a bust, however, and the Cerritos doesn’t make it to Ockmenic 9 in time to complete its mission, leaving the Aledo victorious.

Thanks to Tendi, however, Freeman can strike a fatal blow to Buenamigo’s project. By not considering the possibility of life on LT-358, the autonomous Texas­ classclearly isn’t suited for Starfleet. But when she brings this flaw to Buenamigo’s attention, the admiral reveals a dastardly scheme. You see, Buenamigo has been trying to rise above the admiralty, a position he has occupied for years, by truly leaving his mark on Starfleet; a new fleet of ships would certainly do just that. But Freeman and the California­ class were in his way, so he has been trying to sabotage Freeman and the Cerritos’ reputation, including sending the captain into a near-impossible diplomatic mission in “Hear All, Trust Nothing,” and sending the ship into a place he knew was populated with Breen in “Trusted Sources.” Now, he must remove Freeman on his way toward true prominence.

At the same time we learn Buenamigo has such sinister motivations, MacMahan delivers the last act of the recurring plotline featuring Ensign Sam Rutherford (Eugene Cordero) and his mysterious implant. After combing through the code to the new Texas class, Rutherford has a dire realization: the code is his. He recalls suddenly that this code was what he was working on when he suffered the accident that led him to get his implant, and he remembers how the shadowy figure he has seen in his memory was actually Buenamigo. The admiral recruited him years ago to start working on what would become the Texas class, and then tried to cover it up following the accident. Rutherford has a dire warning for Freeman and Buenamigo: when the Texas fleet is activated, this code will ultimately become unstable, just like Rutherford’s previous project, Badgey, who we last saw in “No Small Parts,” and the ships will surely wreak havoc just like Badgey did.

“Starfleet is so competitive! Once you’re an admiral, you hit a wall. I’ve been trying for years to make a name for myself. I’m not letting you take it from me.” – Admiral Buenamigo to Captain Freeman

The Aledo and two other Texas class ships docked at Douglas Station, the Dallas and Corpus Christi, start attacking not only the Cerritos, but Douglas Station itself thanks to the ships’ instability. Buenamigo is destroyed by his creation. The three vessels are powerful enough to knock out Douglas Station’s (weak) defenses and even cripple a Sovereign-class vessel that came to help. Seeing no other options, Freeman lures the attacking ships away and into a high-warp chase.

The Cerritos crew frantically search for options on how to defeat the three Texas-class vessels, and its only when Boimler sticks up for Shaxs’ (Fred Tatasciore) idea of ejecting the warp core and using it as a mine that the Cerritos gains a slight advantage and knocks out two of the pursuing ships. However, one Texas class is more than a match for the Cali class, so there’s only one thing left to happen: someone to swoop in and save the day. Who is it this time? Beckett Mariner (Tawney Newsome).

Let’s back up a bit. Having been kicked off the Cerritos after being wrongly blamed for the media mishap, Beckett Mariner is living the rogue archaeologist life with Petra Aberdeen (Georgia King), and things are going pretty well for the pair. There is some trouble in paradise, however, when Mariner gets suspicious about who is funding the pair’s archeological excursions. It turns out their backer is one Admiral Jean-Luc Picard, who of course is famous for his love of archelogy. Mariner admits she was actually hoping to discover some sinister backers so that she had an excuse to go back to Starfleet, but an excuse presents itself anyway when the pair learn Douglas Station is under attack by the Texas­-classships.

“I think deep down I was looking for a reason to go back to Starfleet.”

“Are you joking? You just escaped all that.”

“I know, but I think I want to be a part of something that stands for the greater good.” – Mariner and Aberdeen, after Mariner discovers Admiral Picard was their benefactor.

So, Mariner arrives at the Cerritos as it is facing off against the one remaining Texas-class ship, but her tiny ship is not alone. Mariner has brought the entire California-class fleet with her, and the support ships quickly overwhelm their last would-be successor. It’s a rousing moment of lower deckers and their ships working together to prove their worth over the more advanced Texas­ class, and this action-packed finale even momentarily let us forget how improbable it is Mariner could round up all these ships in the first place.

Hearing Boimler rattle off every Cali­-class ship as the Lower Decks theme swells is a great moment, and we see quick shots of some familiar ships and crews, including the Oakland, as seen in “Much Ado About Boimler,” the Merced, as seen in “Moist Vessel,” the Carlsbad, as seen in “Mining the Mines Minds,” the Inglewood (captained by Vendome and his all-Bolian bridge crew) as mentioned in “The Least Dangerous Game,”and, hilariously, even the faux-Cerritos crew on the Alhambra, as seen in a flashback by Doctor T’Ana in “Veritas.” Seeing these basically forgotten characters arrive for this finale is a great touch by McMahan and illustrative of his fantastic skill at drawing throughlines through his entire series, although that’s certainly not the only throughline McMahan supplies to this episode.

Besides the appearance of these minor characters, let’s consider some other plot elements that are threaded into this episode. We finally learn the full story of Rutherford’s implant, a mystery that started at the end of season two and continued to great effect in season three’s “Reflections.” “The Stars at Night” also ties together the hitherto invisible threads of Buenamigo trying to sabotage Freeman and force her to face impossible odds, only for her and her crew to pull through and prove the Cerritos’ worth. Mariner, meanwhile, learned what life was like outside of Starfleet after taking Aberdeen up on her offer from earlier this season. And Tendi, for her part, proved how valuable she is as a science officer, thus justifying her path toward becoming a senior officer, a journey she began in “Minding the Mine’s Mines.” And finally, who arrives on the Cerritos to join Tendi in her science officer training? T’Lyn (Gabrielle Ruiz), the black sheep of the Vulcan ship Sh’vhal, as seen in the season two episode “wej Duj.”Taken together, this is an incredible number of threads to pull together, and such consistency is one of the things that makes Lower Decks stand out from similar shows.

So yes, “The Stars at Night” proves to be an engaging episode that rewards folks who pay close attention to this wonderful show. While Mariner being able to rally all the California-class ships and make it to the Cerritos in time is quite far-fetched, this convenient plot device comes at a time in the episode when you probably won’t care about the believability. After all, an episode or movie’s ability to suspend disbelief is the hallmark of great storytelling. The question we now face is where does the Cerritos crew go next, and will season four offer the same level of emotional maturity, hilarious Star Trek tributes, and razor-sharp writing as season three? It’s a shame we’ll have to wait a year to find out.