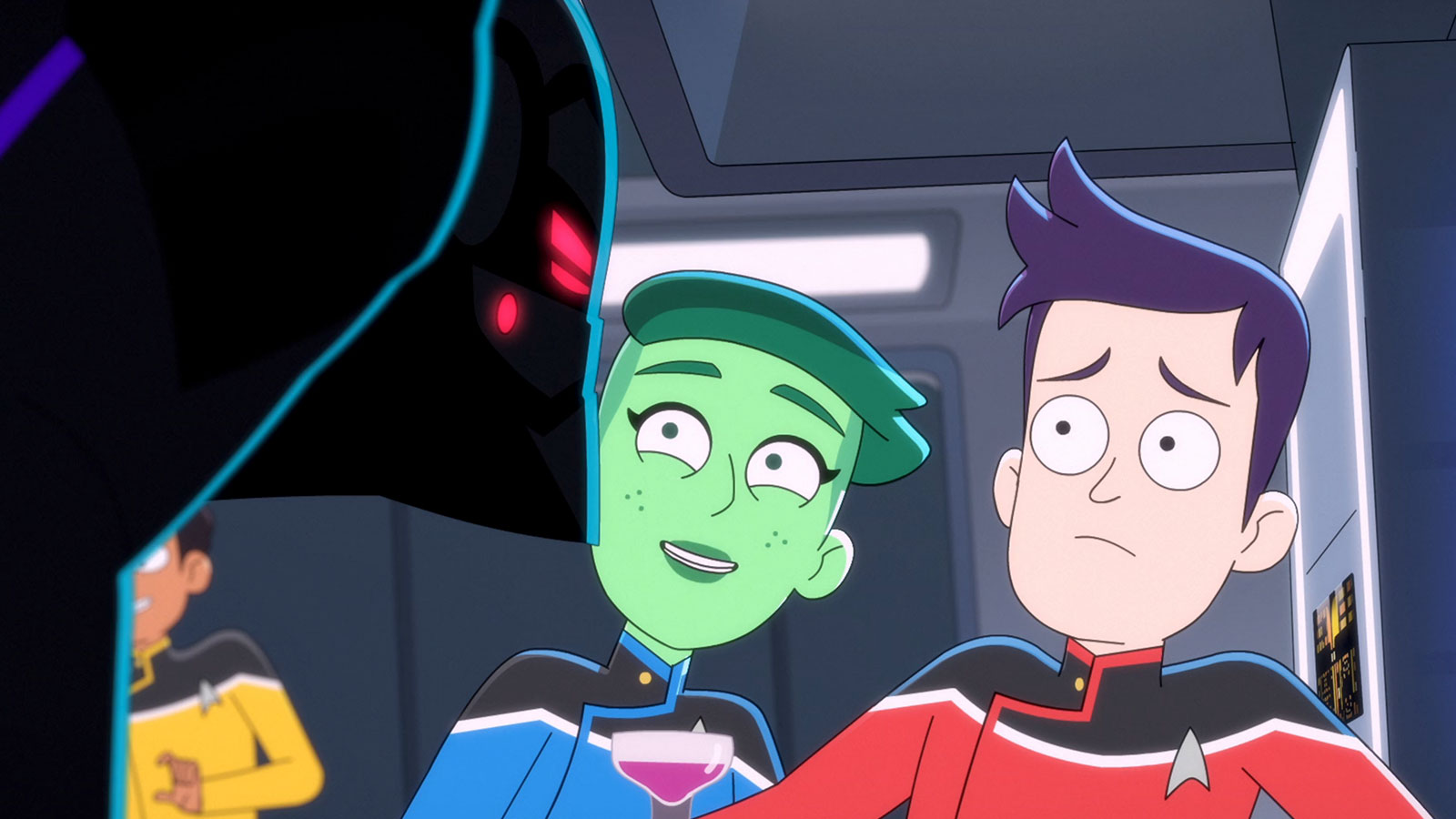 As we saw last week, Ensign Beckett Mariner (Tawney Newsome) is now assigned directly to Commander Jack Ransom (Jerry O’Connell), and the commander has the ensign on a short leash. Mariner is tasked with being as responsible and orderly as possible, no small feat for Mariner, and this regimen gets tested when the Cerritos is tasked with repairing an orbital lift above Dulaine, a paradise planet. Ransom is so keen on keeping Mariner in line and pushing her beyond reasonable limits that he assigns himself and the ensign to repair the lift, while Ensign Rutherford (Eugene Cordero) and Lieutenant Commander Andy Billups (Paul Scheer), the actual engineers, are tasked with maintaining diplomatic relations with the people on the planet below.

As expected, things go wrong on the planet, and the engineers’ lives are in danger thanks to a society that is hilariously reminiscent of any number of Star Trek cultures with strange customs and unusual rulers. The mission starts off nicely enough, of course, with the residents of Dulaine reminiscent of some of the more open and promiscuous cultures we’ve seen in TOS and early TNG, but things devolve when the engineers break some diplomatic rules and are brought before the planet’s leaders. In this case, the people of Dulaine worship a psychic baby, a sentient computer, and an all-powerful volcano (a governing system they claim provides plenty of checks and balances), so it’s fair to say Rutherford and Billups aren’t quite equipped to handle this situation.

On the orbital lift, Mariner keeps resisting Ransom’s crack of the whip, and opts – temporarily, at least – to go rogue and rescue Rutherford and Billups without Ransom’s help. Skydiving down through the atmosphere, she has a last-minute realization that she should indeed just stay in line and follow Ransom’s commands, and aborts the rescue mission and follows Ransom’s order, with Ransom none the wiser. Ultimately, Mariner’s adherence to Ransom’s directives saves the engineers and earns her a bit of appreciation from the commander, but their relationship is definitely still icy.

We were somewhat surprised that Ransom’s motivations for keeping him and Mariner on the orbital lift were indeed just to challenge Mariner’s rebelliousness. We thought he would ultimately have a sensible, responsible reason for switching up the away team assignments; after all, he wouldn’t have made it to second-in-command of a Federation starship if he was prone to illogical and irresponsible behavior. There should probably be repercussions for Ransom following his lapse of judgment, no? In case, his humility in admitting his poor decision-making to Mariner does add a bit more depth to his character; he isn’t just a gym rat, although to be fair his physique does lead to a successful conclusion to the diplomatic faux pas on the planet below!

Anyway, Ensign Brad Boimler (Jack Quaid) and Ensign D’Vana Tendi (Noel Wells) are on the Cerritos as the former ensign makes a notable career change: he is going to start saying yes to new opportunities. This change is inspired by other now-captains in Starfleet starting out as lowly ensigns (such as Ensign Vendome, who appeared in six previous Lower Decks episodes) and rose quickly to the top, so Boimler thinks this strategy can earn him a command faster than he originally anticipated. Boimler’s affirmation of various requests from other Cerritos crewmembers do indeed earn him some kudos and experience (and some laughs for the audience), but it’s when a terrifying hunter comes aboard the ship needing to satisfy his bloodlust that the ensign bites off more than he can chew.

All signs indicate the hunter, K’ranch (Nolan North), really wants to kill Boimler in the most horrifying way possible, leading to a chase around the ship as the ensign struggles to survive the hunt. Just when Boimler seems at the end of his rope, a timely encouragement from a Klingon board game the ensigns were playing earlier steels Boimler’s resolve and allows him to face the creature head-on – and gets a spear in the shoulder, and a selfie from the hunter, for his trouble. Alas, his terrifying experience encourages him to continue his affirmative attitude, so we’re interested to see if this aspect of his character continues throughout the season.

While “The Least Dangerous Game” may not be as laugh-out-loud funny as its predecessor, it does offer enough enjoyable moments to keep a consistent smile on the viewer’s face. Perhaps more importantly, this episode serves as a catalyst for what we hope will be a new personality aspect for Boimler. It also paints Ransom in a humbler light, which we haven’t really seen before, so this will make the burgeoning relationship between him and Mariner more interesting to watch.