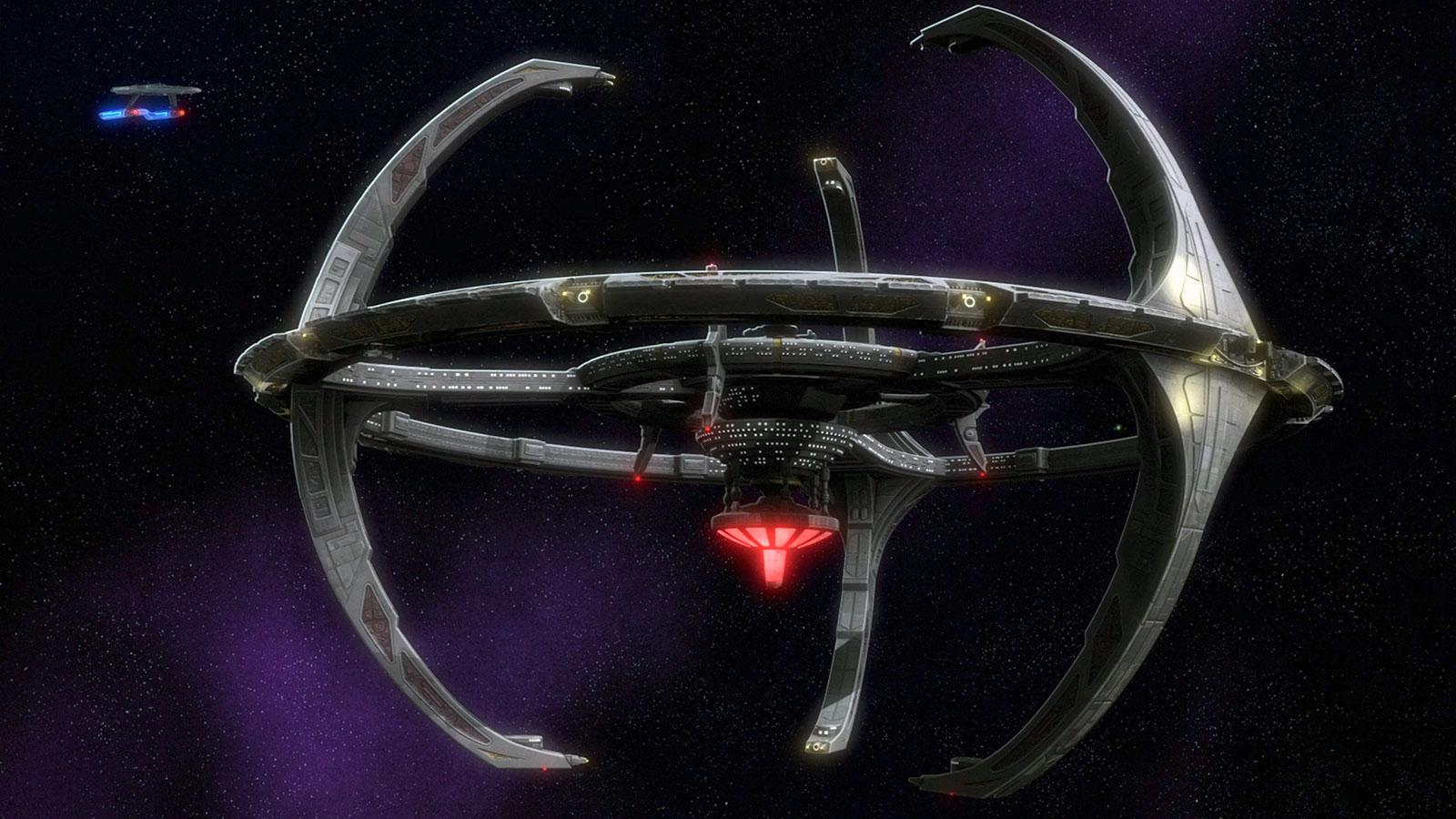 The Cerritos makes a surprise stop at everyone’s favorite Cardassian-turned-Federation space station in what proves to be a killer episode full of laughs, heart, and legacy character appearances.

In a surprise change of plans from their support-only role, Captain Carol Freeman (Dawnn Lewis) is told to visit Deep Space Nine to lead negotiations between the Karemma, a Gamma Quadrant-based race, and the Federation, a process that’s taking place to help mend the scars left from the Dominion War. It’s an intimidating assignment, but other crew members, such as our ensigns, are happy to make a pit stop at the famous station. While Ensigns Brad Boimler (Jack Quaid), D’Vana Tendi (Noel Wells), and Sam Rutherford (Eugene Cordero) are thrilled to go station side, Beckett Mariner reluctantly opts to stay onboard to hang out with her new girlfriend, Ensign Jennifer Sh’reyan (Lauren Lapkus), and her friends.

Let’s just get this out of the way: seeing Deep Space Nine in all its glory again after 23 years is such a touching moment. Lower Decks clearly afforded some time and money to make its portrayal of the station as accurate as possible. Fans are treated to the same theme music from the show, an intricate recreation of the station in Lower Decks’ art style, some establishing shots of the station that mimic their live-action counterparts, and, of course, a thorough tour of the station’s promenade and bridge. Major praise goes to the production team for putting so much love into this episode’s setting.

“Thank you, Colonel Kira. I trust you were informed the Vancouver will no longer be joining us.”

“Well, it’s not Starfleet Command if they don’t throw us a few curveballs.”

And yes, the arrival of Deep Space Nine in Lower Decks means some legacy characters get to appear. Namely, Nana Visitor returns as Kira Nerys, an ex-Bajoran fighter-turned-station-commander who apparently knows Shaxs (Fred Tatasciore) from back during the Cardassian occupation of Bajor. Also, Armin Shimerman returns as Quark, the Ferengi bartender who has leveraged his business into a quadrant-spanning franchise.

Quark actually is the catalyst for this episode’s conflict, as he apparently repurposed Karemma technology in a not-so-legal way to sell a new type of branded replicator, a technology he has used to grow his franchise. The Karemma catch on to Quark’s scheme and try to arrest him, which leads to a bit of chaos for our other characters in this episode.

On the station, Boimler continues his bold persona by betting like a maniac and absolutely killing it at the dabo table. Meanwhile, Rutherford and Tendi actually do some work and load cargo onto the Karemma ship docked at the station, and while doing so gain the help of Mesk (Adam Pally), an Orion Starfleet officer who unabashedly and incessantly promotes the Orion stereotype of pillaging, thieving, and pirating.

Mesk does this so much in the company of Tendi that she snaps at him and asserts that not all Orions are pirates. We’ve seen this reaction from her before in last season’s “We’ll Always Have Tom Paris,” so we weren’t at all surprised by her sudden outburst. What we were surprised by was Tendi’s behavior later in the episode, when she needed to assert her well-hidden pirate skills to save herself, Rutherford, and Mesk from going through the wormhole on the Karemma vessel. By seeing Tendi in action, something we rarely witness, we admire this episode for furthering her journey in coming to grips with her species’ stereotype, and how she is pushing back against the stereotype.

Ultimately, Mesk leans into the racist Orion persona so much that it isn’t surprising that when the going gets tough, we learn he has never even been to the Orion homeworld and instead grew up in Ohio. He was only playing the part of a stereotypical Orion because that’s what he thought was expected of his species. Luckily, Tendi was able to show him differently, and she asserts it’s possible to toe the line between living your heritage and still maintaining your own character. That’s a decent Star Trek lesson if we’ve ever heard one.

As Quark runs into trouble with the Karemma and Rutherford and Tendi are dealing with Mesk and the runaway ship, Mariner is back on the Cerritos attending a get-together with Jennifer and her friends. The swashbuckling and prone-to-aggression Mariner isn’t exactly comfortable in this setting, and she’s miserable trying to fit in with Jennifer’s friends. But it’s the fact that she is willing to try at all that speaks volumes about how fond she is of the Andorian.

When the assembled friend group starts to panic about a power outage caused by the Karemma as they try to arrest Quark on the station, Mariner learns Jennifer doesn’t want her girlfriend to show restraint and not be herself in front of her friends. So, Mariner does what she does best by taking matters into her own hands to incapacitate the ensigns so the group doesn’t completely run out of air as the Cerritos’ systems go offline.

This B-plot touchingly ends with Jennifer and Mariner stunning themselves and collapsing together in an embrace while they wait for help to arrive. For what it’s worth, we were pleasantly surprised to see so much movement on the Jennifer/Mariner front, and we admire this show’s writers for inserting little teases about this blossoming romance into previous episodes before making the relationship the subject of its own full-fledged plot line. Mariner has grown quite a bit since we were first introduced to her three years ago, and seeing her with a partner is a pleasant change – although we have to wonder how long the couple with last, considering we learned in “Mining the Mind’s Mines” that Mariner is afraid of long-term relationships.

This all-too-short episode will likely be one of the most memorable for season three of Lower Decks, as it embodies what this series does best: respect Star Trek. We still get plenty of memorable lines and legacy cameos, but it’s within a setting that is even more special than your typical Lower Decks episode. “Hear All, Trust Nothing” also moves the needle quite a bit for Mariner’s nascent romance, and the two ensigns seemingly make a great couple. But you know what they say about all good things…