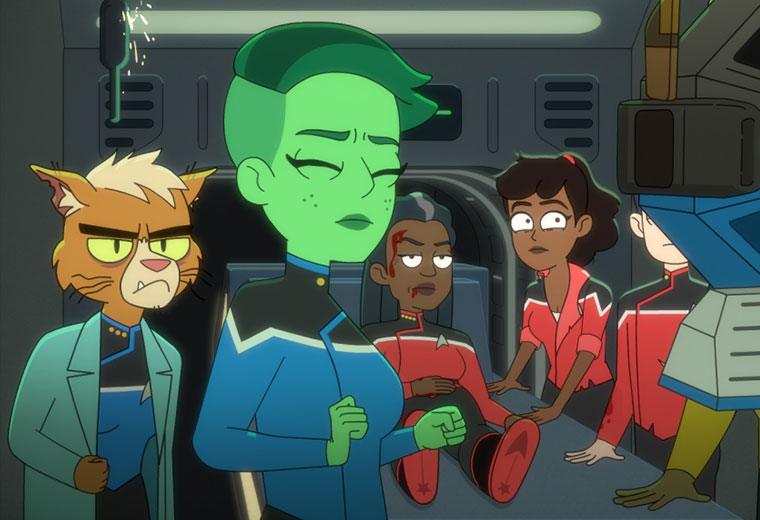 Note: This review DOES contain spoilers

And of course, there was *that scene*. But we’ll get to that in a moment.

Hot off the heels of Boimler (Jack Quaid) learning about the true relationship between Mariner (Tawny Newsome) and Captain Freeman (Dawnn Lewis), the entire crew of the Cerritos soon knows the secret. This makes Mariner’s life a living hell, as the crew now starts sucking up to her in an attempt to gain favor with the captain. But all that takes a backseat when the Cerritos gets a distress call from her friend, Captain Dayton (Gillian Vigman). While the Titan is technically in range of the call, too, Captain Freeman wants to tackle the distress call herself. To her, it’s a nice break from boring second contact missions and serves as a chance to poke fun at her friend Captain Dayton.

In a neat callback to “Much Ado About Boimler,” the crew of the late U.S.S. Rubidoux, including Captain Dayton, has now found a new ship: the Solvang. This episode uses this new ship to establish the deadly antagonists, the Packled. We have nothing but praise for the quick but to-the-point battle scene between the Solvang and the Packled, as it gives off a Kelvin verses Narada vibe from Star Trek (2009). The icing on the cake is when the doomed ship attempts to warp away from the Packled’s grappling hooks, but ends up tearing itself apart in a spectacular explosion. Kudos to the animation team and director Barry J. Kelly for crafting a battle sequence we haven’t really seen before in Lower Decks. But that’s just a taste of what’s to come.

As the Cerritos warps in, they are also trapped by the Packled. The small support ship is no match for the Packled’s far more powerful vessel, and the Cerritos is horribly damaged. If not for the senior staff and lower-deckers working together, the Cerritos would have been completely dismantled. We really appreciate the two teams working together in a way that’s only been hinted at before, and it further reinforces the idea that the senior staff isn’t always the ones to save the day.

In another callback to a previous episode, Rutherford (Eugene Cordero) enlists Badgey (guest star Jack McBrayer) to help quickly develop a virus to help the Cerritos escape the Packled. Predictably, Badgey ends up seeking revenge for Rutherford killing him at the end of “Terminal Provocations.” To prevent Rutherford from falling victim to Badgey’s quest for revenge, Shaxs (Fred Tatasciore) sacrifices himself to ensure Rutherford’s survival and the destruction of the Packled vessel. While seeing a member of the senior staff heroically save a fellow crewmember is moving, we can’t help but feel this sacrifice is a little hollow, as the relationship between the two characters was never explored deeply. The most we saw the two interact was perhaps in “Veritas” when Rutherford and Shaxs were on the secret mission together, but even then we didn’t get the sense that Shaxs cared deeply enough about Rutherford to sacrifice himself. We’ll chalk this up to the 10-episode season simply not offering enough time to explore every character’s relationship as in-depth as we’d like.

In any case, Rutherford and Shaxs’ actions worked, as the Cerritos was able to escape the Packled’s grasp until more Packled ships warp in. But the Cerritos also gets some reinforcements in the form of…. wait for it… the U.S.S. Titan!

Make no mistake, this was Lower Decks’ Zefram Cochane-esque “Sweet Jesus!” moment. Die-hard fans will remember that the Titan was the ship Will Riker and his wife, Deanna Troi, leave the Enterprise for at the end of the last TNG movie, Star Trek: Nemesis. We only got the name of the ship in that movie, but an entire book series was launched that focused on the Titan‘s adventures. Of course, none of that is technically canon, but here we see the Titan in all its ass-kicking glory, complete with Riker (Jonathan Frakes) in the command chair and Counselor Troi (Marina Sirtis) at his side. It turns out that having Fletcher (Tim Robinson) assigned to the ship back in “Terminal Provocations” was just a tease.

The climax of this episode is such a wonderful moment for fans. Lower Decks clearly favored The Next Generation across its many Star Trek references this season, and Riker and Troi’s appearance feels like a perfect culmination. Seeing the Titan warp in, Riker yelling “Red Alert!,” and hearing a grand reprisal of The Next Generation theme while the Titan saves the Cerritos is simply awesome.

Looking ahead, the Titan also assumedly plays a role in Lower Decks season two, as Boimler applies and receives a transfer to the ship, leaving Mariner frustrated at his absence and lamenting that she wasn’t able to transfer and get away from Captain Freeman. We assume that Boimler will find his way back to the Cerritos sooner than later, and we’re looking forward to seeing how much the Titan plays a role in the next season.

In regards to the Cerritos‘ captain, she seems to be getting along with her daughter now, as the two decide to pool their talents to find a happy balance of the Cerritos‘ abilities. We’ll see if that relationship continues to heal in season two, or if something happens that reverts them to the antagonistic nature we are used to. The second season will also supposedly see Rutherford not remembering anything about Tendi or the events of season one thanks to his destroyed cybernetic implant, so we’ll see if and how the character changes from his bubbly, innocent personality. Our two cents: we hope not.

When we learned that Lower Decks was immediately picked up for a second season before the first episode even aired, we knew it was a sign of confidence from CBS that the show would be a hit. After seeing the first season, we totally get why they thought that. This show has been such a wonderful surprise; lovable characters, a thorough love for Star Trek, and an expansion of the Star Trek universe only possible through animation have made Lower Decks a welcome entry in the Star Trek pantheon. It’s the show Star Trek needed (and deserved) – something to make fun of the franchise’s triumphs, failures, quirks, and everything in between. We eagerly await the next season and what creator Mike McMahan and crew treat us to next.