Surely Trekkers remember the series finale (All Good Things…) of Star Trek: The Next Generation, where Q visits Picard to inform him he single-handedly destroyed life on Earth before it began. Remember the scene where Q and Picard stand over a “little pond of goo” at a time 3.5 billion years in the past? Q ponders the goo and finds that the amino acids failed to form the first protein that made life possible, which led to the extinction of all living organisms on Earth before they even emerged and evolved. This scene always haunted me as a child, and it still haunts me today as a scientist, but rest assured, there were trillions (a severe underestimate of the real thing) of amino acids in that pond and probably trillions of ponds just like it all over the Earth. And the formation of proteins is a thermodynamically spontaneous event, so it is highly likely to occur not once, not twice, but trillions upon trillions upon trillions of times (again, a severe underestimate of the real thing) over the course of a billion of years. Nevertheless, life cannot emerge without the proteins to support it, and that is why this Star Trek scene was so terrifying and so breathtaking at the same time.

Now that peptides have been formed with life-supporting properties, now comes the hard part: the formation of self-replicating polymers. Ribonucleic acid (RNA) is a self-replicating polymer composed of nucleic acids in single-stranded form. Base pairing among RNA strands allows new, complementary strands to be created, which they themselves base pair with other nucleic acids in order to recreate the same sequence. It is this phenomenon which has led scientists to refer to RNA as a self-replicating molecule with the ability to catalyze its own copying mechanism. It is an observable feat and can be reproduced in a test tube (without the aid of bacteria or enzymes). It, like DNA, forms the genetic basis of life; in other words, RNA provides simple cells (like those expected to initially emerge from abiogenesis) with the essential instructions required to produce proteins. Specific RNA sequences can be associated with a particular protein sequence, meaning that a certain blueprint sequence on RNA (or DNA in the modern world) can be used to produce the amino acid sequence on a given protein. Natural selection would favor the association of these sequences because it is essential for life to have both DNA/RNA (the “blueprint” of life) and proteins (the “machines” of life). Therefore, the first unicellular organisms that emerged from the “muck of life” likely adopted RNA as its genetic material, since it is simple enough to replicate itself without the assistance of complex enzymes and pathways as those seen in today’s organisms.

This video shows the complexities of translation in a typical cell today, the process by which RNA sequences are read by ribosomes in order to generate the amino acid sequence of a specific protein. Please note, this is a demonstration of cellular mechanisms today, and the mechanisms developed by the simple protobionts that emerged 3.5 billion years ago were likely to be extremely primitive by comparison and no where near as complex as what is shown in the video. In fact, the self-replicating nature and base-pairing ability of RNA may be sufficient and simple enough to establish a direct link between RNA sequences and amino acid sequences in the pre-biotic world.

The next step is the formation of micelles and vesicles from fatty acids. The formation of micelles involves fatty acids in an aqueous (watery) environment. Fatty acids are mostly hydrophobic, which means they pack together in the presence of water, with water soluble portions exposed to the surface. When enough micelles are formed, they clump together and fold around themselves, generating a vesicle with water and other molecules trapped on the inside. We see a similar phenomenon in soap bubbles; in fact, the formation of bubbles from the conglomeration of soap molecules is not unlike the packing of fatty acids to form a vesicle. It is the hydrophobic nature of fatty acids in soap that forms the spheroid shape of bubbles in the presence of water and air. The formation of this vesicle (fatty acid membrane) is very important because it is the component of living cells that gives it its basic structure and physical barrier from the environment; it protects whatever is on the inside from the potential hazards outside (this is the main function of cell membranes). 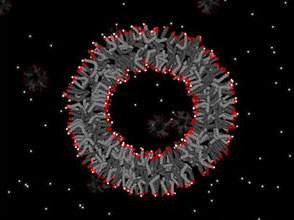 The fatty acid vesicle is a thermodynamically stable structure that spontaneously forms on their own in the presence of fatty micelles (the smaller sphere-like objects floating near the vesicle) and water (the white particles). No intervention, chemical or otherwise, is required to form this spherical shell, and it is one of the most important steps in the abiogenic formation of cell membranes.

When these fatty acids form vesicles, some of them will trap proteins in the interior. Others capture RNA. But only a small percentage will capture both, and these small, non-living networks of self-replicating polymers (RNA) and their associated molecular machines (proteins) trapped inside a protective barrier of fatty acids (the cell membrane) form the basis of life. Scientists have already developed these self-replicating, self-maintaining structures (termed protobionts) in the laboratory using organic and inorganic molecules; they aren’t “life” yet, but it is the final step in the abiogenesis process before protobionts evolve into living, simple bacteria. It is a thermodynamically probable outcome and when all the conditions for life are present, it is only a matter of time (billions of years to be exact) before single-celled organisms can develop, grow, and evolve from non-biological sources into complex, intelligent life forms.

This video summarizes the step-by-step process of abiogenesis and how it could potentially generate life in the simplest form. It also includes scientific rebuttals to common Creationist arguments and misconceptions regarding the Theory of Abiogenesis.

It is important to note that while Earth was one of those few planets in the galaxy fortunate enough to have water in the liquid state, carbon sources, reductive molecules, and to be located sufficiently close enough to its local star to provide the energy necessary for the emergence of life (too far: Earth would be frozen over and lifeless; too near: Earth’s oceans would’ve evaporated and a runaway greenhouse effect would turn Earth into another lifeless Venus), not all planets are quite so “lucky.” Not all solar systems have planets, and those that do are mostly composed of gas giants. Most terrestrial planets may be too far or too near its local star to stabilize water in the liquid state, and, even if they are in that happy range, some planets probably don’t have any water or abiogenic compounds. But for the select few that do, the origin of life isn’t just possible; it is probable and the existence of life elsewhere in the universe is a calculable outcome. This brings us to the final determination of whether life can exist on other planets: the Drake Equation.

Astrophysicist Frank Drake developed a probabilistic expression that would approximately determine how difficult it was to detect technologically-advanced civilizations in the galaxy using radio waves. The variables of the equation are based on the step-by-step process of abiogenesis and evolution, starting with the habitability of planets and the emergence of life to the evolution of intelligent, sentient beings. The probability of the existence of life on other worlds is based on the number of stars in the galaxy, the number of stars with planets, the number of those planets with life-supporting properties, the probability that life evolves on those planets, the fraction of those life forms that evolve into intelligent beings, the probability that those intelligent beings develop advanced technology, and finally the probability and the time it would take for us to detect them—or rather it begs the question: do these civilizations last long enough for us to detect them before they go “extinct”? The following is the formulation of the Drake Equation:

Though some of these variables are determinable (such as the number of stars in the galaxy that have planets), other variables are a little harder to predict (like the number of planets with the capability of supporting life). The final variable L is completely arbitrary. If one were to assume advanced civilizations tend to destroy themselves very quickly, then this number will be small and therefore the galaxy would be sparsely populated with intelligent life. But if advanced civilizations, like the Federation, were able to solve their own socio-economic problems, evolve past the need to destroy, conquer, or consume beyond their means, and live peacefully in their own self-sustainable culture, then we can expect the existence of many alien races, exploring the stars and the planets in very much the same way Starfleet does.

When inputting the appropriate, most logical values for each variable in the equation, Frank Drake found the number of civilizations currently in existence to be “astronomical” (excuse the pun). However, they are very difficult to detect, and Drake hypothesized it is probably because they are too far away for our radio telescopes to detect or these alien civilizations do not stand the test of time long enough for us to detect them. Furthermore, there is a more serious issue we haven’t yet considered, and it may very well determine the fate of our own civilization if we aren’t too careful.

Stephen Hawking concludes that the existence of intelligent life on other worlds in the galaxy is highly probable, and it is likely there are hundreds of alien races thriving in the galaxy, perhaps even exploring other star systems; however, he warns that seeking them out may not be a smart idea. If aliens are indeed traveling around the galaxy, they may not greet us with a peaceful banner of exploration and friendship (and they certainly won’t be Vulcans). Rather, if they are searching the stars for something, they may be scouring for resources and food in a near-death struggle to survive. If they are more advanced than we are, they may see humans as inferior beings, and enslaving us might be at the top of their to-do list. Sending out radio signals with the intention of “seek[ing] out new life and new civilizations” may just mark the nadir of our own existence (assuming aliens do exist and that they are anything like the Borg, the Dominion, the Klingons, the Romulans, the Cardassians, or even…the profit-seeking Ferengi).