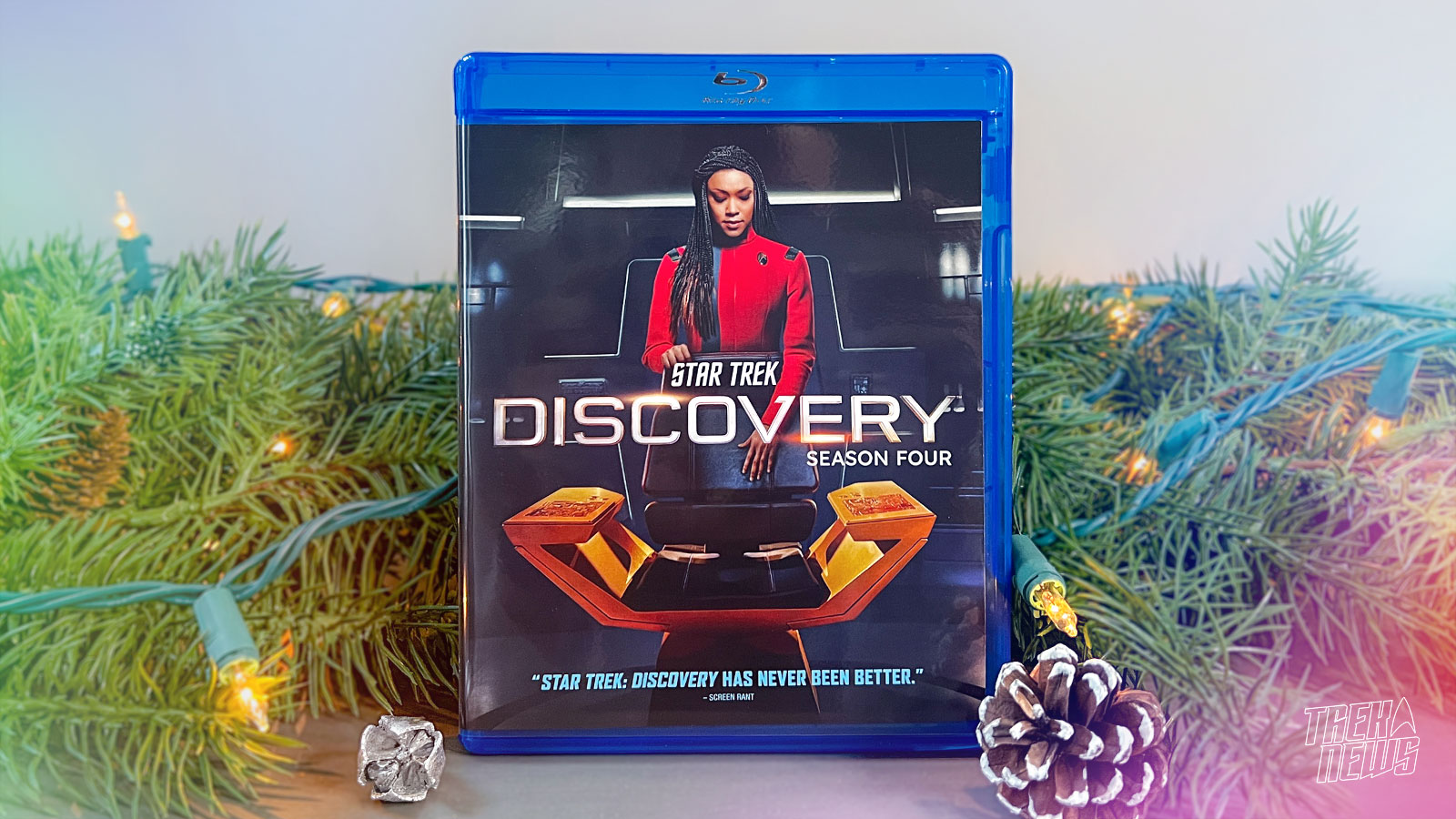 Star Trek: Discovery season four is riding the mycelial network right to your media shelf, as that season’s Blu-ray and DVD release is out now. We thought the season itself was pretty good and told a story worthy of the Star Trek ethos, so there’s no question the episodes themselves are worth your time. So, the question becomes: does this release warrant the $30–$50 asking price?

As is often the case, the value of home media releases lay in the bonus features. On that front, we were impressed with what this release has to offer, with one caveat.

The nuts and bolts of what special features on the discs are as follows:

Right away, the inclusion of a feature dedicated to working around COVID is totally sensical. No television production was spared the inconvenience and challenges COVID presented, so seeing how Discovery’s cast and crew adapted to the pandemic is enlightening and sobering. Major kudos to that team for working together in the face of such adversity. We’re glad this home media release documents this part of history as it related to Star Trek. It’s remarkable seeing how the cast and crew adjusted to living with COVID’s ever-present threat. For example, Anthony Rapp talks about the Discovery’s cast’s regular Dungeons and Dragons sessions, and executive producer Olatunde Osunsanmi explains how working around COVID was like the production team learning how to use a new muscle. If you don’t mind the look back in time as it relates to COVID, this featurette is worth watching.

The most enjoyable featurette on this release for us was the Creating Space video. We’re tech geeks here at TrekNews.net, so seeing how Discovery harnesses the incredible augmented reality wall is fascinating. We already knew this technology was used thoroughly throughout season four, but seeing how it works behind the scenes just adds to our appreciation of the show’s incredible production values. We also appreciated how this feature didn’t talk down to the audience. The interviewees spared no technobabble when describing how the AR wall works and how it helps filmmakers hone their craft. Definitely take the time to check this feature out, especially since the AR wall is undoubtedly being used in season five.

The Being Burnham mini-documentary is a brutally honest look from Sonequa Martin-Green about how her personal life influenced her professional life during season four. Martin-Green likens this experience to how life imitates art and vice versa, and we walked away from this feature with a deep appreciation for the actresses’ humanity and emotional intelligence. There are plenty of personal photos and videos from Martin-Green herself that help to describe her journey off-screen and don’t be surprised if you tear up a bit as she relates her life’s ups and downs during filming.

Lastly, The Voyage of Season Four documentary is the real meat of the extras on this release. It’s almost an hour long and features an attentive narrative of how and why things happen in season four. You’ll hear from a variety of cast and crew about events in the season, character motivations, and challenges in bringing each episode to life. This feature alone really helps increase the value of this release’s asking price. You should definitely grab a drink and enjoy this comprehensive look into a great season of Discovery.

Oftentimes, fans go straight for various audio commentaries on these home releases. Such commentaries are great ways to gain insight from the show’s cast and crew while watching an episode. On this front, this release only offers one episode commentary, the season finale “Coming Home,” and this is easily the most disappointing part of this release. The commentary itself, provided by executive producers Michelle Paradise and Olatunde Osunsanmi and actors Sonequa Martin-Green and David Ajala is illuminating, but why only one commentary on this release? Surely other notable season four episodes, like “The Examples,” “Kobayashi Maru,” and “Rosetta,” just a name a few, are worthy of cast and crew recorded commentaries.

Like every Paramount+ home media review in the last few years, we’re going to level the same criticism at this Discovery release: why no 4K option? Discovery is a beautiful show filmed with the highest production values in the industry. Why limit audiences to 1080p? Sure, having the season available on a disc allows people with less-than-stellar internet connections to experience the episodes without compression or pixelation, so eagle-eyed disc owners will enjoy a slightly better video quality than streaming anyway. But 1080p is the bottom of the barrel nowadays in terms of resolution. The producers of this show deserve their work seen in ultra-high definition!

So, if you don’t mind limiting your experience to one episode commentary, you’ll otherwise find a lot to enjoy with this home media release. There’s a healthy selection of extras to enjoy outside a watch or re-watch of the entire 13-episode season, and we noted how the quality of these features are better than recent home media releases, like Star Trek: Picard season two or Star Trek: Lower Decks season three. There are no Zoom interviews here, folks. If you’re left wanting more Discovery until season five starts streaming (date to be determined), this release will help make that wait easier.

Star Trek: Discovery season four is available now on Amazon. At the time of publication, the Blu-ray is $40, while the DVD is $30. The Limited Edition Steelbook is $50.

Click here for details on how you can enter to win a copy of Star Trek: Discovery Season 4 on Blu-ray Steelbook from us at TrekNews.net.