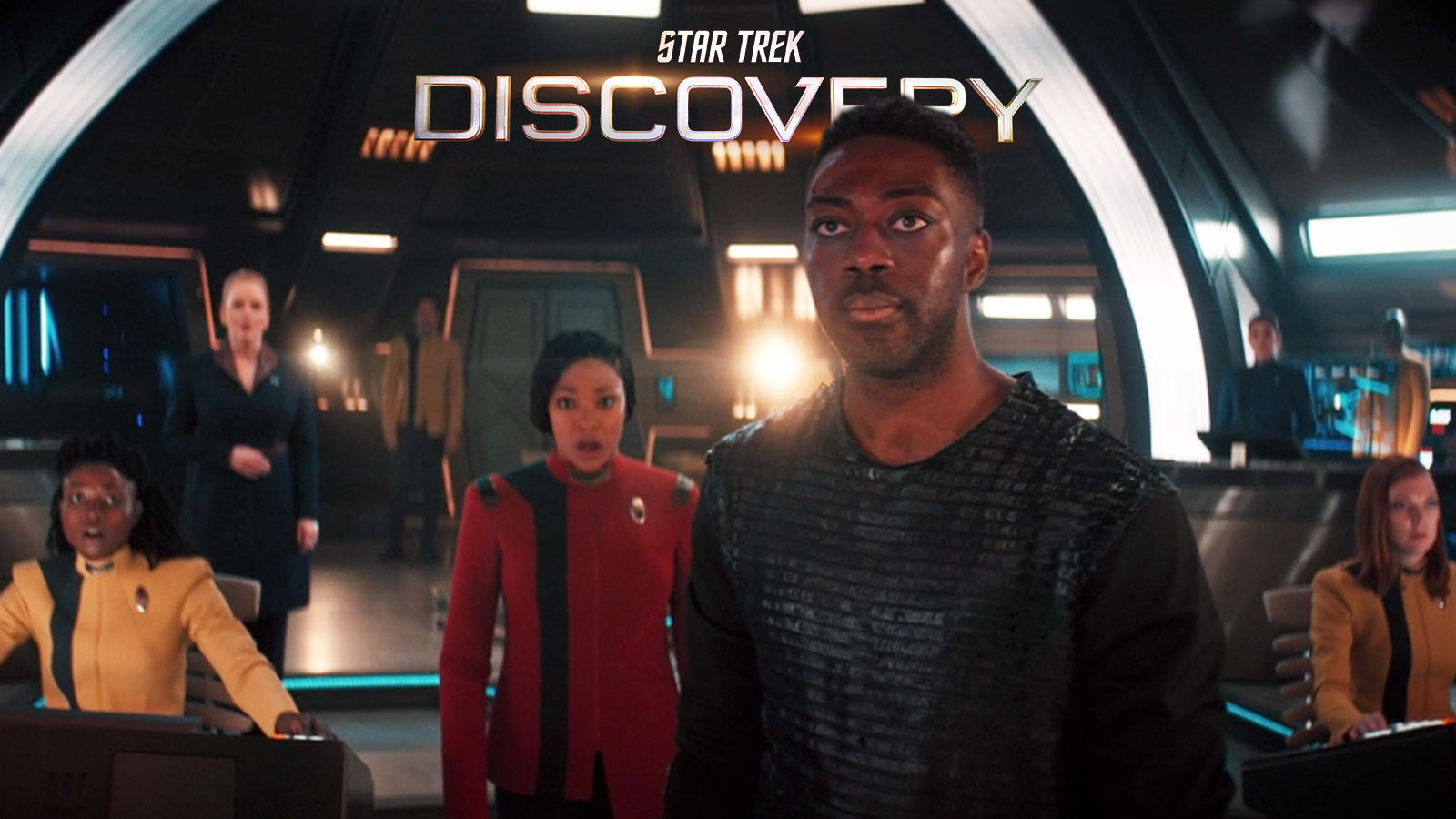 After a mostly enjoyable third season that saw its crew acclimate themselves to the far-flung future, Star Trek: Discovery returns for its fourth season with an explosive episode that introduces a new, deadly mystery for Michael Burnham and crew to solve, along with some marked changes to the future as we know it.

Five months after Michael Burnham (Sonequa Martin-Green) and crew defeated Osyraa and solved the mystery of the galaxy-shattering Burn, the Federation is in a much better place. Instead of a more-or-less ragtag group of planets struggling to survive in a post-Burn galaxy, the organization is back on its feet and ready to, once again, explore strange new worlds. Michael Burnham and the Discovery are practicing what we are calling “dilithium diplomacy,” where the Federation shares the valuable mineral found in abundance in the Verubin Nebula to worlds that may have been antagonistic toward the Federation in the post-Burn galaxy. Dilithium, after all, is the life-blood of galactic travel, and everyone wants it.

As the ship most quickly able to get on-site, Admiral Vance (Oded Fehr) sends Captain Burnham and the Discovery, along with an unlikely passenger: the Federation president herself. Burnham is at first irked at the president’s presence, as she thinks the newly minted leader just wants to “tick a box” and say she has seen action, which would make her more appealing as a politician. In any event, the Discovery heads off to face whatever is threatening the station.

When they get there, it’s clear that the station has been impacted by some sort of gravimetric anomaly, causing it to spin out of control. Luckily, Lt. Keyla Detmer (Emily Coutts) and Lt. Joann Owosekun (Oyin Oladejo) show off their nimble piloting skills to align Discovery with the out-of-control station, allowing Tilly (Mary Wiseman) and Ensign Adira Tal (Blu del Barrio) to board and try to repair it. They are greeted by the station commander who, let’s just say, doesn’t react amazingly well to high-stakes situations. Thankfully, Tilly exercises her command abilities (which were nurtured in season three) to help think of a much better solution for getting the people off the rapidly failing station.

Of course, complications arise as the station and orbiting Discovery starts getting pelted by asteroids and other damaging debris thanks to the gravimetric anomaly. It’s up to Burnham, facing resistance from the observing president, to spring into action herself, piloting a Work Bee in an effort to remove obstructions from the station’s escape pod. By basically sheer luck, Burnham manages to successfully extract the station’s crew and get Discovery away from the station, but not before a chunk of debris wrecks the ship’s shuttle bay and kills the station commander. Farewell, commander, we hardly knew thee.

In all fairness, Burnham’s risky mission shouldn’t have been successful, and that’s something President Rillak raises to her at the end of the mission. Contrary to Burnham’s assumptions, the president wanted to be on Discovery so that she may observe Burnham in action, as she is considering the captain for a new assignment – leading a new prototype Starfleet ship. The emergency at the station highlighted for the president why Burnham would not have been the right person for the job: the captain is too focused on saving everyone she can, even if it risks the lives of all those involved. It’s much like the famed Kobayashi Maru test Starfleet cadets must take – how to handle a seemingly impossible situation. Burnham so far has passed no-win scenarios in her life, but as the president predicts, Burnham’s luck must run out at some point.

For our money, we were intrigued by the president’s dressing down of Burnham. For all her accomplishments, Rillak totally has the right read on Burnham’s motivations: altruistic, yet foolhardy in many situations. Burnham is clearly struck by the president’s brutally honest analysis, and we’ll bet this aspect of her command style plays a huge role this season.

We find Horsdal a welcome newcomer to Discovery‘s cast, and her introduction in this episode speaks strongly to the type of character we expect her to be. She doesn’t seem phased by being spore-jumped, even though most people are supposedly disorientated by the event, which makes her seem like a strong-willed and stoic leader. Her tactical analysis of the space station evacuation is sensible, even if her proposed solution – getting away from the station with an acceptable loss of life – is opposite Burnham’s eventually successful plan. Rillak also has the ability to quickly negotiate and employ empathy to make things go her way, such as when she talks down the station commander, thus allowing the mission to eventually succeed. Taken together, we are intrigued by the character, and we’re thinking she is on her way to being an unexpected foil for Burnham.

Let’s backtrack for a minute and explain where Cleveland Booker (David Ajala) is during this rescue attempt. Early in the episode, he opted to leave Discovery to reconnect with his family on his homeworld, Kwejian, and specifically help his young nephew pass a rite of adulthood. It’s a touching subplot that shows how Book is reclaiming the relationship with his family he lost before and during season two, as well as how important Kwejian is to his species. But when the local wildlife starts to react to some unknown and unseen event, Book takes his ship to find out what’s going on. He sees Kwejian’s moon literally get destroyed before his very eyes thanks to what appears to be the same gravimetric anomaly as the one we saw at Deep Space Repair Beta Six. The explosion, as we find out later, renders Kwejian effectively destroyed, a chilling blow to Book.

We thought it was a wise choice to have this unknown gravimetric event impact, not just the space station – which offers little stakes on its own – but the homeworld of a well-liked character, especially since that planet is renowned for its beautiful and interconnected nature. Add to that the spectacular visual effect of a moon getting imploded by the gravimetric anomaly, and you have one of the most interesting and thought-provoking moments of this episode.

Finally, let’s not forget Saru (Doug Jones), who at the end of last season remained on his homeworld to help mentor Su’Kal (Bill Irwin) after the younger Kelpien’s experience in the Verubin Nebula. As we see in “Kobayashi Maru,” Kaminar is a bit different than in the 23rd century; whereas Saru’s Kaminar hosted a hierarchy between the Ba’ul and the Kelpiens, now the two races seem to co-exist and govern the planet together. Saru serves as an elder advisor to the Kelpien governing council, helping his species navigate post-Burn diplomacy and politics. However, he feels pulled in two directions: the need to stay on Kaminar to serve his people, and returning to Discovery. Su’Kal actually encourages Saru to leave, if that’s what his heart desires. We’re curious how the alien’s return to Discovery impacts Burnham’s captaincy and how he is able to contribute to solving the gravimetric mystery.

As a season premiere, “Kobayashi Maru” gives viewers a decent look at where our crew is since the events of the previous season and sets up the stakes for whatever threat they are facing now. Is the gravimetric event fabricated by some unknown enemy or a naturally occurring phenomenon? For now, our money is on the former. Will Burnham’s dressing down by President Rillak play into her decision-making now that she’s finally Discovery‘s captain? Only time will tell.