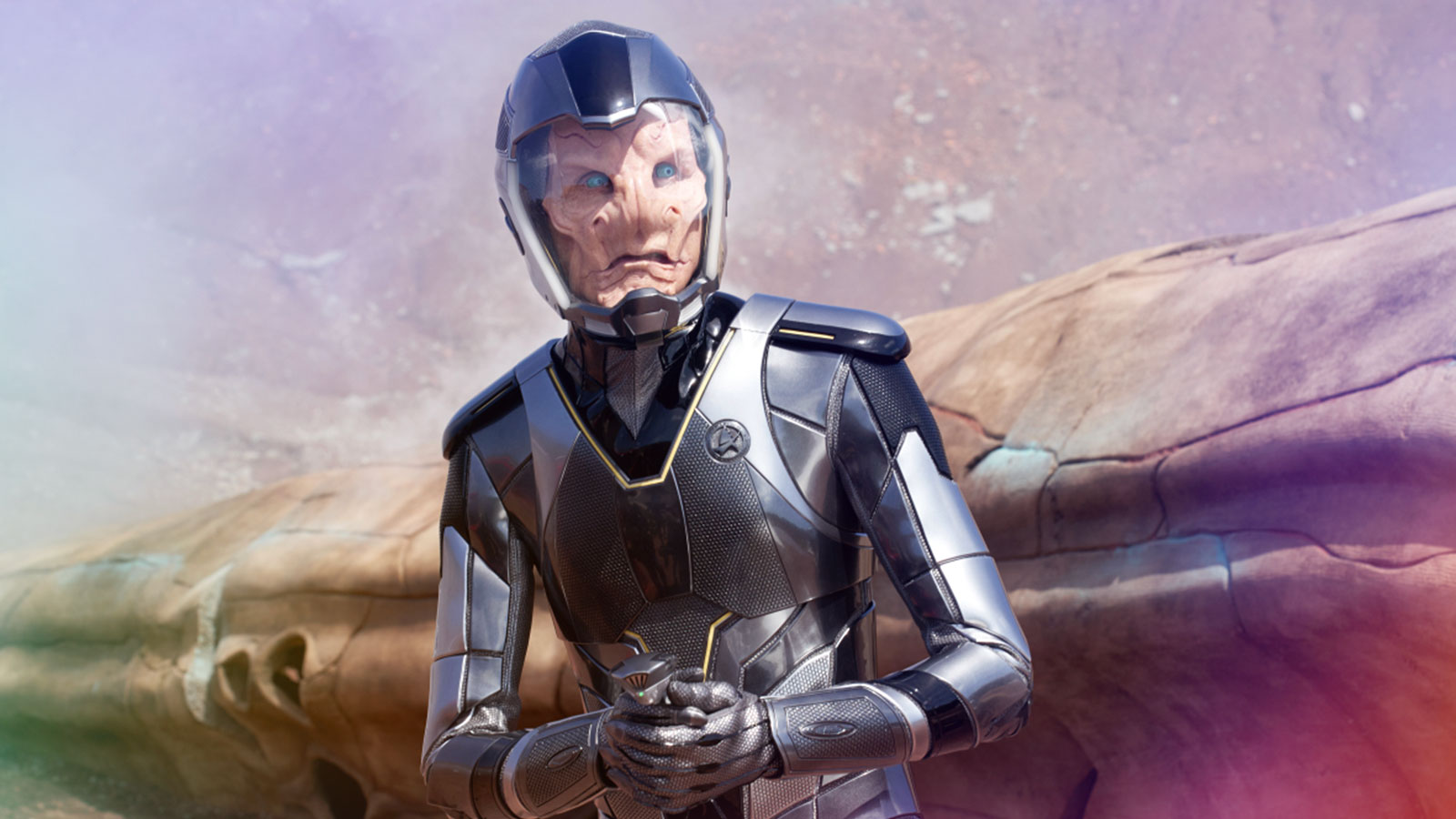 The crew of the USS Discovery diverts from their journey to Unknown Species 10-C’s hyperfield to gather some intel about who exactly they are heading to meet — but is the potential loss of time worth it?

We’ll say right away that this episode is strong in one plotline and weak in the other. and such a mixed episode is highly unfortunate considering where we are in season four’s run. At a time when Star Trek: Discovery should be ramping up to a bombastic conclusion, having an episode that feels like its marking time may not be what fans are looking for.

Like we predicted at the end of our last review, Captain Michael Burnham (Sonequa Martin-Green) chooses to investigate a nearby planet, once thought to inhabit Unknown Species 10-C. In its current state, the planet is desolate, the victim of catastrophic asteroid impacts. However, Burnham believes that the crew is liable to gain some kind of insight into who Unknown Species 10-C are and what they value. Knowing such cultural context will help Discovery initiate a proper conversation with the makers of the Dark Matter Anomaly, and thus hopefully stop the DMA from wreaking havoc on Earth, Ni’Var, and other Milky Way worlds.

It’s a delicate game of chance Burnham assumes by ordering this away mission. As General Ndoye (Phumzile Sitole) rightfully points out, such a diversion may lead to nothing and give the DMA more time to be destructive. Burnham, ever the optimist, insists that something useful will be gained from this mission. She promises that to the general. Burnham’s gutsy, but promising something she can’t possibly guarantee doesn’t seem like a wise move. But like the rest of Burnham’s risks, this one does indeed pay off.

Burnham takes Saru (Doug Jones), Commander Kayla Detmer (Emily Coutts), and Doctor Hugh Culber (Wilson Cruz) on the away mission, and the team soon discovers the planet was indeed once the home to 10-C, and that they had to evacuate due to some world-ending event. Things get complicated for the team, however, when Saru starts experiencing a strong fear-inducing physiological response, a strange feeling for the Kelpien since he lost his species’ trademark ability to sense fear in season two’s “An Obol For Charon.” Burnham and Culber soon fall victim to this sensory panic, too, and the team can’t figure out why. Also confusing is why Detmer is seemingly immune to these experiences.

The team ventures further into 10-C’s ruins and find themselves in a nursery, where Burnham, and then the rest of the team, decide to expose themselves to the pheromones left behind – but instead of fear and panic, the pheromones in the nursery make the team feel love. It’s a touching revelation that asserts 10-C values life like the residents of the Milky Way, and this connection may very well provide cultural context for which to communicate with 10-C. In a broader sense, Discovery is making the assertion that some feelings, like love, are universal; this is a profound and quintessential sci-fi statement, and one perfectly communicated through this episode’s unique sci-fi setting.

These scenes on the alien planet allow Discovery to flex its impressive sci-fi muscles. As much attention as this show gets for portraying a progressive view of relationships, emotions, and interconnectedness, let’s not forget that it knows how to do good ole-fashioned genre storytelling. The planet is striking, with floating landmasses and foreboding imagery that seems totally alien, and let’s not forget about 10-C themselves: based on bones left behind on the planet, they must have been gigantic, and able to survive in the gas layer of a gas giant. What in the world will they look like when Discovery finds them (presumably) in the hyperfield? This episode is at its most enjoyable when we see Burnham and company exploring this unknown species, and “Rosetta” effectively piques our interest in 10-C even more than it already was.

“Captain, back in the nursery, I just want to apologize for letting my personal issues compromise…”

“If you finish that sentence, I will demote you to ensign.”Detmer to Burnham following the away mission

This storyline also witnesses some surprisingly deep character development for Detmer, as we learn she is extra sensitive to the loving embrace of the pheromones, as she never felt those warm feelings growing up. Detmer also reasons she was able to remain calm when the rest of the team were suffering from the fear of pheromones because she had previously undergone PTSD training; fans will remember in season three how Detmer suffered mental and emotional trauma after the shocking arrival in the future. We’re thrilled, then, that her experiences in season three, which didn’t seem to lead toward anywhere substantial, have come into play in this episode. Moreover, we think Detmer’s character development in this episode is nicely not as rushed or awkwardly placed as some of the other bridge officers who get some time in the spotlight this season.

As engaging as this storyline in this episode is, the other storyline is equally unengaging. Remember, Ruon Tarka (Shawn Doyle) and Cleveland Booker (David Ajala) are also trying to get into the hyperfield so they may destroy the DMA’s power source. In this episode, they have caught up to Discovery but remain hidden from the larger ship. Tarka gathers that the best way to get into the hyperfield is to attach Book’s ship to Discovery, but the pair needs to first blind Discovery to their presence. Tarka asserts that he can place a “patch” on Zora to prevent her from detecting their ship attached to the hull – but he needs to be in Discovery‘s engineering room to do it.

Tarka and Book clandestinely beam aboard Discovery, and this is where the viewer may start to say things like, “They can do that?” and “Wow, that’s stupidly convenient,” and “They have time for this?” The two men wear a deus ex machina device that hides their bio signs from Zora, which makes their mission sensical only up to a certain point. It’s one thing to hide your vitals from the ship’s sensors, but once they are on the ship, they talk, crawl around Jefferies tubes, and conveniently spy on other people’s conversations. How does any of this not trip Zora’s alarms? She’s a sentient being who is aware of what’s going on in the ship. Having her visually, aurally, and otherwise sensorially completely ignorant of Tarka and Book’s presence seems to be pure plot convenience.

While Tarka embarks on his mission to deliver the patch in the engineering room, Book books it to General Ndoye. You see, the two men mega-conveniently (we’re talking like Obi-Wan Kenobi witnessing Dooku espousing his plan in Attack of the Clones-levels of convenient) were party to a conversation between the general and Ni’Var’s President T’Rina (Tara Rosling), as the former character again stressed her dismay at Burnham’s side mission. Seeing this as an opportunity to get an insider on Discovery, Book fakes a message to the general in an effort to meet with her. Ultimately, Book is able to convince the general to ally herself with him, and for now, all he needs from her is her presence on the inside, knowing what Discovery and its crew are doing. Interestingly, the general gets Book to agree to stand down should 10-C capitulate before Earth is at risk of destruction. Book may be on board with such a scenario, but will Tarka be?

Meanwhile, Tarka’s journey to main engineering means he gets to conveniently view a conversation between Adira Tal (Blu del Barrio) and Jett Reno (Tig Notaro), who makes her second appearance of the season following her minor role in “The Examples.” Tal explains to Reno that they always have looked up to Lieutenant Detmer and wishes they were more like her, including having the pilot’s sense of confidence – and yes, this conversation is as awkwardly placed as it sounds. Reno advises Tal to strike up a friendship with the pilot, but to not come on too strongly. This conversation would carry a lot more believability if we had seen Tal feel this way toward Detmer before, but this is literally the first time their praise of Detmer is made known.

While watching this exchange, Tarka gets the idea to distract the engineering crew with various replicator malfunctions throughout the ship, leaving him to gain access to the part of engineering needed to place the patch. His isolation doesn’t last long, however, as Reno comes back to the room and finds Tarka hiding under a console. Fret not Reno fans: a few scenes later, we find out Tarka somehow got the upper hand on Reno and she is now hostage aboard Book’s ship. How Tarka was able to get Reno onto the ship is unknown, but at least it seems we’ll be seeing more of her in the near future. Although we must say, Reno’s sudden importance is jarring after not seeing her in this season besides the aforementioned episode.

So, it turns out Discovery‘s side quest to gain useful knowledge about 10-C was a success, and in the process, fans were delivered a fascinating sci-fi story of… well… discovery. But we can’t help but feel disappointed with the rest of the episode, as Book and Tarka’s infiltration of Discovery doesn’t pass the straight-face test. This seems to be an example of the writers knowing where they wanted the characters to be but didn’t care how they got there. This was a complaint we’ve leveled at this show before, and we’re sorry to see this situation happen again.

In any case, perhaps next week is when we finally see Discovery arrive at what we’ve been waiting for: Unknown Species 10-C’s home. Now, they will have a decent starting point for making conversation, as the pheromones discovered on the planet lend themselves to emotion-based communication. But how will contact between Discovery and 10-C pan out, and will 10-C be the giants they are made out to be? And how will Book call upon General Ndoye to help his and Tarka’s plan?

Get 3 months of Paramount+ for $1/month

Right now new and returning Paramount+ subscribers can subscribe to the service for as low as $1/month for the first 3 months. To take advantage of the offer, click here and enter coupon code BIRTHDAY in checkout.