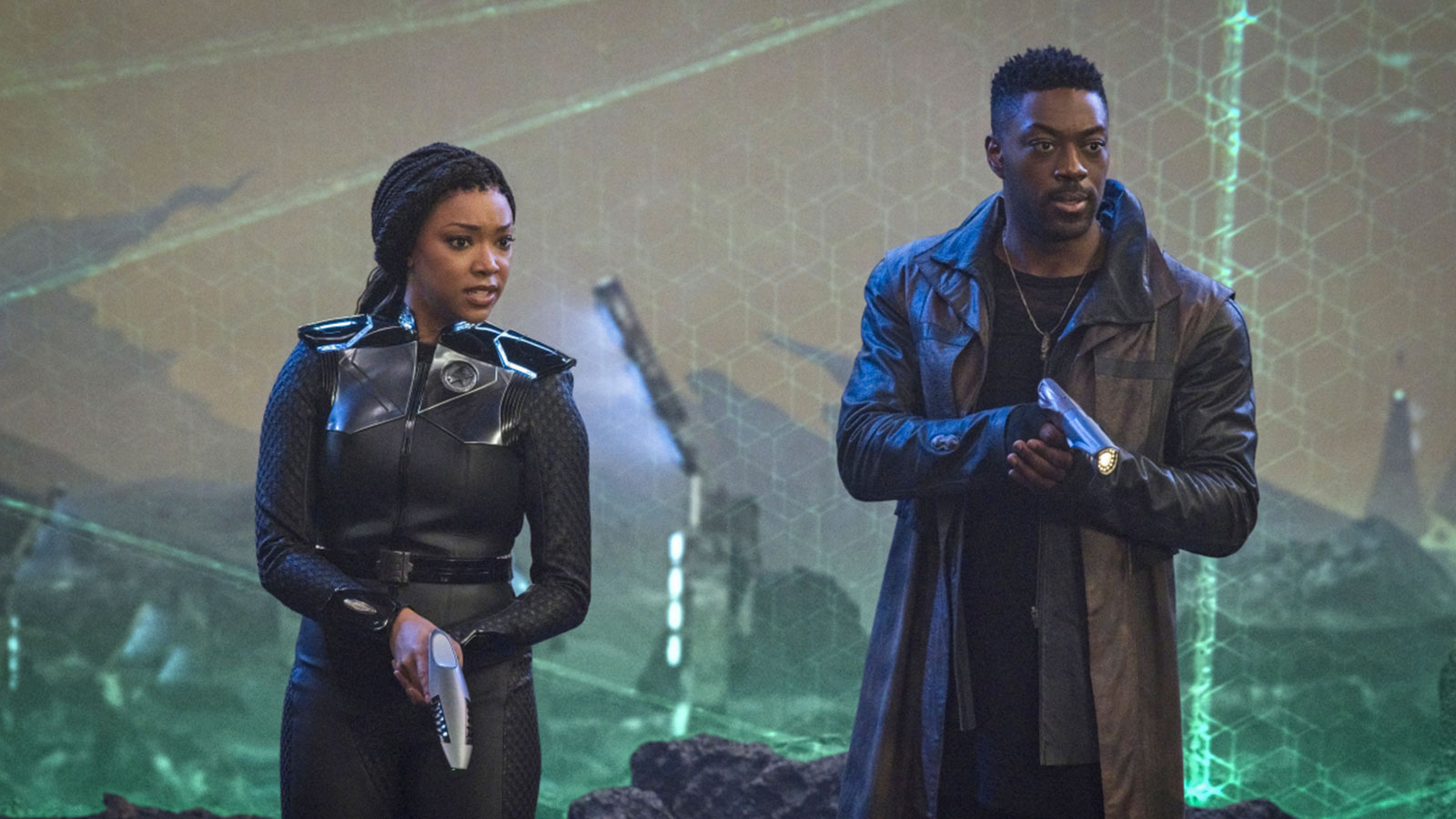 The “dark matter anomaly” once again throws the Federation a curveball, as it appears to disappear and reappear on its own, prompting new questions about its origin — all while the crew of Discovery tries to save a colony right in the path of its destruction.

Hot on the heels of determining that the DMA must have been artificially made, Starfleet has a new mission: evacuating the Radvek Chain, an asteroid colony that faces possible imminent destruction. It’s a task made all the more difficult because the colony contains a group of prisoners, referred to as “The Examples,” and this group can’t leave their entrapments without someone blasting them out. Luckily, Michael Burnham (Sonequa Martin-Green) and Cleveland Booker (David Ajala) are up for the job.

The pair locate the prisoners only to find resistance from the captives; they’ve been mistreated for years following relatively small-time crimes, only because they were examples to the rest of the colony of what happens when someone breaks the law. This is a practice born from Emerald Chain leadership back when that group was in power on this colony, and things never changed once the Chain left. The prisoners are naturally distrustful of the Federation, as they think the Federation never cared about them during or after Emerald Chain control, but Burnham insists that they will be granted political asylum if that’s what it takes to get them away from the ill-fated colony.

Burnham, ever the idealist, feels the need to get everybody away from the DMA, even if it means putting other lives in danger. We saw this characteristic of hers come to the forefront in the first episode of this season, where the Federation president laid into her and noted that at some point Burnham’s luck will run out. That day doesn’t come in this episode, luckily, and the only prisoner who gets left behind – Felix – does so because he chooses to.

On this note, we want to praise Michael Greyeyes for bringing Felix, a man who we’ll describe as an emotionally stoic character, to this show. Star Trek: Discovery doesn’t often rely on guest stars — a characteristic of Star Trek of old — but “The Examples” grants us two excellent guest stars (more on the second one in a moment). Felix’s history is a brutal one – he killed a man after robbing his house, thus leaving the man’s daughter fatherless – and he knows he must pay his debt to society. It’s for that reason that he chooses to stay on the colony even in the face of likely death, despite Burnham’s concerns, and Book’s even stronger protestations. There’s a pain behind Greyeyes’ eyes that is inescapable, and his performance makes it easy for the audience not to judge his character’s terrible actions, much like how Burnham doesn’t judge the man even after learning why he is in prison.

To her credit, Burnham breaks from her aforementioned need to save everyone and eventually realizes that only Felix can choose his destiny, and this actually leads to an interesting disagreement between her and Book. Book, still dealing with the emotional trauma of watching his homeworld die because of the DMA, thinks that no one should be left to suffer at the hands of the anomaly, and by extension, whoever made it. He strongly urges Burnham to make Felix leave the colony — which of course she can’t do. Book’s perspective here clearly shows he’s passing through the anger stage of grief; he’s angry at the DMA, he’s angry at whoever made it, and he’s angry that someone would willingly let the anomaly destroy their life, as Felix did in his final moments. We’ve noted before how great it is Discovery is letting Book’s grief breathe over the course of multiple episodes, and “The Examples” is another… well, example, of the show’s writers doing just that.

While Book and Burnham attempt to rescue the colony’s prisoners, another guest star boards Discovery: Shawn Doyle, playing the brilliant Federation scientist Ruon Tarka. Tarka is there to work with Paul Stamets (Anthony Rapp) as the two men endeavor to learn how the DMA works, and particularly why it’s able to appear and disappear at will. It’s hoped that by learning how the DMA operates, they can trace the anomaly back to its creators. Like Greyeyes, Doyle brings fantastic life to “The Examples” via his character, who is smug, complicated, and brilliant, much in the way Stamets is. The two men develop a theory that the DMA is controlled via a wormhole at its center (which builds off the theory Stamets proposed earlier in the season). To help prove this, the scientists develop a dangerous test environment in Discovery’s engineering room that replicates a mini-DMA.

Assisting them is Jett Reno (Tig Notaro), who makes her first appearance this season. Her absence has been notable, and seeing her deliver her dead-pan lines just makes us wish she was present in the previous four episodes. An explanation for why the character was absent throughout all the DMA talk before would have been appreciated, but alas we’re happy she is back, for however long that is. (We’d put money on Notaro actually not being on set with the other actors in this episode, as her shots appear to be inserts, clever framing, and/or VFX work).

“I can just picture Tilly’s face when she finds out we’ve been sucked into a wormhole three days after she left.”

Overseeing Stamets and Tarka is Saru (Doug Jones), who is wary of the danger the mini-DMA puts Discovery in; the experiment, after all, is replicating the dangerous anomaly within the ship itself, with only a protective shield around it. The two scientists almost confirm their theory about the artificial wormhole at the center of the DMA before Saru shuts down the experiment in favor of, you know, not destroying Discovery. But here is where we have an issue with this episode. We can’t help but think the hazardous nature of this experiment could have been conveyed to the audience in a more visceral way. As it is, Stamets and Tarka only tell us that if the field collapses then their lives would be forfeit; nothing happens that shows us this. For example, it would have been more useful to have Discovery, or just the engineering room at least, start to take damage the weaker the containment shield got.

Rounding out this episode is a welcome look inside the head of Doctor Hugh Culber (Wilson Cruz), a man who thus far has dedicated his strength to help others deal with the DMA threat. In “The Examples,” we see the good doctor struggling himself, and it’s through careful yet quick analysis by Doctor Kovich (David Cronenberg) – in a scene that gives Cronenberg more to do than any of his scenes so far – that we learn why. The older doctor seemingly sees right through Culber’s soul: the younger man feels he must always be helping people – Kovich calls it a “savior complex” – otherwise he feels his resurrection, his second chance at life, was for nothing. It’s a brutally honest look at the doctor, and the fact that this show is tackling the question of “who helps the helpers?” is timely, considering countless medical professionals in real life have been similarly singularly focused on helpers others, often to the detriment of their mental health. What Culber chooses to do in the face of this stark realization will have to wait until a future episode, however.

Taken together, the idea that someone somewhere created the DMA and is knowingly wreaking havoc on the galaxy drastically changes how the Federation views this threat and how the Discovery crew reacts to it. It’s intriguing that whatever made the DMA — a species Starfleet is calling Unknown Species Ten-C – has the ability to harness the equivalent power of a hypergiant star, as Tarka explains to Book at the end of the episode. Such entities, in Tarka’s view, must be gods. But determining the true source of the threat is just one question we’re left with from “The Examples.” Will Book and Burnham’s relationship change after Burnham leaves Felix on the colony, despite Book’s protestations? How will Book continue powering through his grief? Will Culber take some time to focus on himself following Doctor Kovich’s assessment of the younger man’s struggles, and how will his struggles manifest to others? This show often leaves us champing at the bit for the next episode, and “The Examples” is no different.

Star Trek: Discovery seasons one, two, and three are available in a Blu-ray box set now on Amazon.