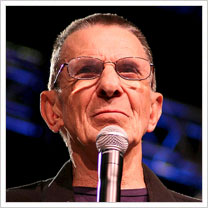 Originally scheduled for October 23, 2010, An Evening with Leonard Nimoy will now take place on April 30th in Long Beach, California at the Carpenter’s Center. The event had to be postponed due to Mr. Nimoy’s  surgery.

Tickets are available online for $65.

Join us for an intimate evening of insight into one of film and television’s greatest icons. Called ‘the conscience of Star Trek,’ by Star Trek creator Gene Roddenberry—the award-winning actor, director, poet and photographer Leonard Nimoy shares his portrayal of the rational and emotionally suppressed Vulcan as part of a remarkable and diverse career that’s left an indelible imprint on American culture!

Mr. Nimoy is also scheduled to appear at Creation Entertainment’s official Star Trek Conventions in San Francisco in March and Las Vegas in August along with an appearance at Dragon-Con in Atlanta this September.