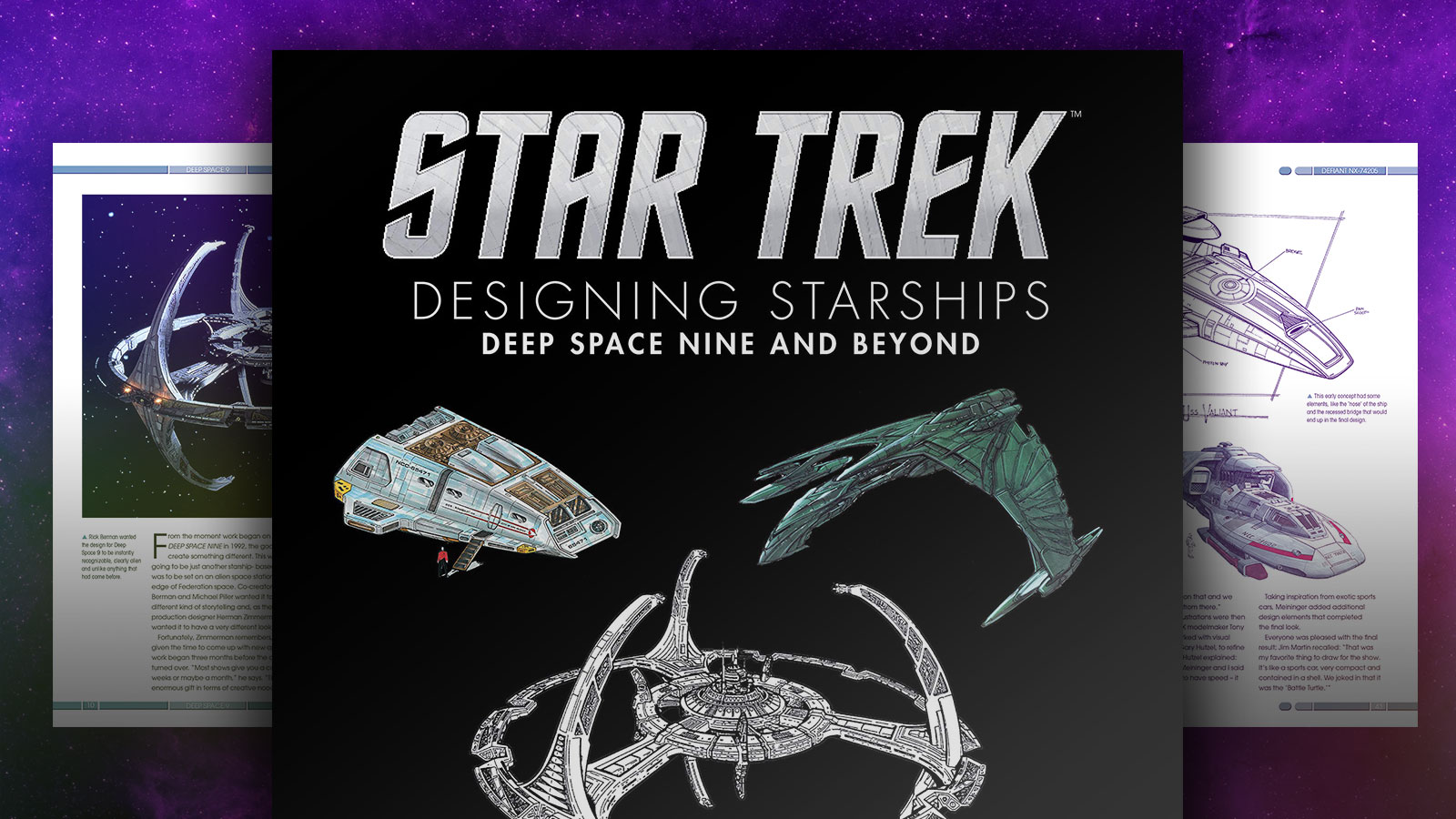 Eaglemoss Hero Collector continues to carve out its niche in Star Trek collectibles and provide products that us Trekkies didn’t know we needed until we encountered them. Five years ago, the idea of making a book about the lesser-known, not very glamorous process of designing Star Trek spaceships would have seemed fairly radical. But when Eaglemoss, a company built on making high-quality models of spacecraft from multiple sci-fi franchises, took up that particular challenge, it was an intriguing prospect. In 2021, with four volumes of the Designing Starships imprint, it’s safe to say that idea has successfully transitioned from a “radical idea” to a best-selling line of books.

Everything on Deep Space Nine was different by design, including the designs of the show. That makes any behind-the-scenes material produced about the show a unique challenge, as evidenced in the recent What We Left Behind documentary. Designing Starships: Deep Space Nine & Beyond is aware of this challenge and, like a highly motivated Niner, comes fully motivated to bat for its home space station. The book’s main mission is to provide an insight into the creative process behind forty-two vessels in the Trek universe, the majority of which we have enjoyed on DS9. Ships from Star Trek: Insurrection and Star Trek: Nemesis are also included.

Designing Starships: Deep Space Nine & Beyond aces its main mission. Measuring roughly 9″ x 12″, the 240-page hardcover book’s glossy cover is pleasing to the eye, thanks to the green and white pattern of the ships against the blackness of the background. The book begins with the DS9 section. A highly detailed double spread of a slice of the station is followed by nearly ten pages of initial sketches, diagrams that were fully finished but ended up being rejected, drawings showing the evolution of the station’s design once the core concept of the circle on circle design was finalized and more. These are accompanied by flowing commentary from the writers as well as quotes from the designers. I say flowing because even though the narrative is a mix of the writers giving us an understanding of the big picture scenario of DS9’s pre-production followed by Herman Zimmerman interjecting with a specific thought about a rejected station’s design followed by Michael Okuda‘s breakdown of the final design. It never feels jarring following this chain. The placement of the art and the words is clearly well thought and unravels smoothly. Writers Ben Robinson, Marcus Riley and Marcus Wright stitch together an immersive process book using concept art, rejected sketches, and interviews from DS9’s prominent designers under Zimmerman’s leadership.

The artwork transports us back in time to the early nineties when CGI was in its infancy and the pixelated computer drawings of starships make you appreciate how little the artists really had to work with. We live in an embarrassment of digital riches today and watching some of these drawings from that time helped me appreciate how far we’ve come in terms of visual effects. Designing Starships: Deep Space Nine & Beyond makes the case that to the stellar team working on DS9’s spaceships the limitations of CGI weren’t a limitation though. They were the motivation. Every ship covered in Designing Starships: Deep Space Nine & Beyond from the DS9 era, and going farther back to the era of Star Trek: The Motion Picture, has multiple architectural drawings, colored paintings, photographs of model replicas, all made by the human hand at a time when the thought of a computer literally building worlds was impossibly far out of their reach.

Once I finished reading Designing Starships: Deep Space Nine & Beyond I felt satisfied and in awe of the talent of the village of people that bought these ships to life on the show. The book covers ships that most would consider key to DS9. The series is my favorite Star Trek show and because I spent an embarrassingly large amount of my life watching and re-watching it, there are a few ships that were skipped out on in the book that I would have liked to learn about. For instance: the ancient Bajoran Lightship (the solar sail from Explorers) always stood out to me but that was not covered in this book.

The biggest compliment that I can give Designing Starships: Deep Space Nine & Beyond is that when I began reading the book I thought I knew what I was going to get: a high-quality process book that laid out the nuts and bolts of important ships from DS9 from inception to final design. It gave me that on every page. What I didn’t expect was how endearing it would be for the spaceship nerd in me. Behind the final design of every ship were tens of rejected ideas, dozens of evolutionary sketches, and hundreds of man-hours spent conjuring up every inch of these gigantic machines that take us away from our homes to the ends of the universe. In that sense, Designing Starships: Deep Space Nine & Beyond is a tribute to the successes, and maybe more importantly, the failures in the creative process behind designing starships.

It’s a love letter to the process that, as our beloved Pak’leds would say, “makes things go”.