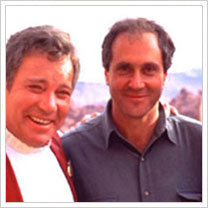 Former Star Trek producer, Rick Berman recently answered a list of questions over at the official Star Trek website. Below is an excerpt from the first part of the questions Berman answered.

Why was Ron Jones, who’d been composing music for TNG, dismissed after Gene Roddenberry’s death?

Berman: On various sites, one of them being Wikipedia, I’ve read some pretty nasty things that Ron Jones has said about me, with a general perception that his music was too good and I was not interested in good music. That is insulting and also absurd. The music on Star Trek was something that was supervised by me and by Peter Lauritson. Peter had been involved in hiring and firing conductors from the first episode of Next Generation to the last episode of Enterprise. Ron came on at one point, I forget exactly when, and he did numerous episodes for us. We got along fine. And at one point, because there were other composers we’d try out and we’d use for anywhere from one to dozens of episodes, it got to a point where neither Peter nor I were pleased with Ron’s work. As I believe I said at the time to somebody, he was doing the kind of scoring that was calling attention to itself. That doesn’t mean, as some people have interpreted it, that I wanted dull, boring music. What it means is that the music is there to enhance the scene that is going. The scene is not there to enhance the music. And Ron’s stuff was getting big and somewhat flamboyant. It was a decision that Peter and I made that was just a simple moving on to other composers. I think Ron was a perfectly good composer. I didn’t think he was in the same ballpark as Dennis McCarthy or Jay Chattaway, who we used a good deal of the time. But we decided to move on and try other composers.

In general, why do you think some fans are so hypercritical of every little thing about Star Trek?

Berman: Let’s just look at the definition of the word fan. I think a vast majority of the fans of Star Trek are not hypercritical. They may be critical about certain things. But there is a certain hardcore group that has problems with things. Brent (Spiner) was here with me for several days, and one of the things we talked about was the fact that I’ve been criticized for killing the character of Data. The irony there is that one of Brent’s conditions for doing Nemesis was that he wanted his character killed. He was rather insistent upon it. And since we knew it was mostly likely going to be the last of the TNG movies and since John Logan worked it in that there was a rebirth of Data, in a way, at the end, it was something that we accepted. Then people got critical of me for having killed Data. The same thing was true with Kirk. As we discussed in our interview, as far as anybody knew, Kirk had been dead for a century when the movie Generations began to be conceived. The idea that he had, in fact, fallen into this Nexus and that he was not really dead and that we would bring him back to join Picard, was something that the studio was very positive about and was something that Bill Shatner was very positive about. And it was our way of saluting the Original Series, because initially it was just supposed to be a TNG movie. But, again, I get criticized for killing Kirk. And then all this business with canon, all the specifics of trying to keep all the canon of Star Trek, from the very beginning in 1966 to the present, so that everything is true to everything else, is very, very difficult. There were times we didn’t do it and we were blamed drastically for not respecting the canon, when in fact we did respect the canon and we did our best to stay true to it, and sometimes we didn’t succeed.

What were some directions you had in mind for Enterprise had it not been canceled?

Berman: We wanted to basically develop a show that, by the seventh season, would bring us to a logical and dramatic method of the creation of the Federation. It was something that Manny Coto and Brannon (Braga) and I had not really spelled out specifically, but it was our goal that that’s where the sixth and seventh season were going to go.

What would the fourth-season finale have been like if it were just setting up season five rather than closing out the series?

Berman: We had no idea. We hadn’t gotten that far. We were probably shooting six or seven shows earlier at the time that we got canceled and we had not really decided what the season-four ending episode was going to be. It might have been a cliffhanger or it might not have, but we hadn’t made that decision before learning that the plug was being pulled.

There was supposedly a rivalry between Star Trek and Babylon 5. Did you know about it? Did you care? Or was that perhaps more between fans of the shows?

Berman: It was purely a fan thing. There was a time when, I don’t know whether it was specifically Straczynski or other people, it was implied that he had pitched an idea similar to DS9 to Paramount and that it had been rejected and that, lo and behold, a year or so later DS9 came about. The implication being that Michael Piller and I perhaps stole all or part of his idea, which was always amusing to Michael and I because it was completely untrue. We had no knowledge of this gentleman. If he did pitch something to Paramount, we never heard about it. DS9 was a show that was created by Michael and me and Brandon Tartikoff, who was the recent head of Paramount at the time, without any knowledge of Straczynski or of anything that he had ever pitched. So when we were accused of stealing his idea it was a little sad but at the same time a little comical to us.

Have you been interviewed or done commentaries for any upcoming Star Trek DVD or Blu-ray releases?

Berman: I have not.

Read all of Berman’s answers over at StarTrek.com