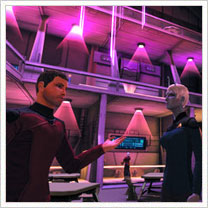 1. Fractal_Eye – Q: When will we get Porthos pets?
A: We will continue to add pets over time. Once we are happy with the number of ambient animals being represented in missions we will start adding more of these as player pets. It would be fun to see these pets randomly roaming your ship interior as well.

2. Jennau116 – Q: Are we going to see more of the Bridge/Ship Interiors get the same love (as the new TOS interior)?
A: The upcoming TOS interior is one of our continued attempts to reduce the size and scale of interiors and still allow some types of game-play. Once we have that interior finished and can run some game-play tests, we can make a call as to whether we can go back and update existing bridges and interiors.

3. Tricksterbro – Q: I was wondering what your plans were for releasing mission and story content other than the featured episodes when they come to an end?
A: Once “Cloaked Intentions” wraps up next week, we will be focused on the Beta release of the Foundry on Holodeck so that everyone may begin to create and play missions. After that we will prepare the Season 4 release with Ground Combat updates, more Remastered Episodes, an updated Tutorial experience, and an update to Klingon mission progression. We have some other content plans that we have in the works as well, but we’re not talking about that just yet.

4. nailpeter83 – Q: Are there any plans to do anything with the Probe from Star Trek IV?
A: It is on the short of list of topics we’ve considered for Future Episode series, but I think it will be further down the road than some of the other series we want to get to.

5. Walshicus – Q: Are there any plans to increase the number of equipment types available to… equip?
A: You can think of your Active Duty Officer Roster as an entirely new paper doll for your starship that you’ll need to start collecting for as what you have in your roster will impact your ship.

6. Trek17 – Q: Will ships ever have dorsal and ventral shields? (top and bottom)
A: Even though the shield indicator is broken up into 4 quadrants, your shields are already 360 degrees around your ship. Those 4 quadrants are broken down into “orange slices”. So when you get shot from above, we do calculate which of your shields was impacted. We felt this was cleaner and easier to manage than true top/bottom shielding.

7. wed horror – Q: Will you implement a “switch” or something so we can turn off our Bridge NPC´s so we can use the Bridge for Role-play?
A: We are working closely with the Champions Online team on a big update for interiors that will allow players much more control over what is displayed and available on their ship interior. We don’t have a solid eta for this, but it is something that both of our teams are developing as a cool new feature that will greatly improve ship interiors.

8. DominikScholz – Q: Will there be something like Shuttle PVP?
A: We are looking at possible maps from Feature Episode series that we can convert to more PVP maps and one of the top contenders is the Vault interior. If we did that, we could easily envision a shuttle pvp scenario.

9. picardalpha2clearance – Q: Why is the duty roster system not utilizing Bridge Officers or Non- Commissioned BOs as we asked for?
A: The idea of making one of your Bridge Officers the “lead” of a department is still a feature we plan to implement. We first want to get the Duty Officer system in and functioning before we add it. Once that system is in game and we’ve had time to see the impact it has on the game, we can then move on to adding department chiefs.

10. DevorahQuinn – Q: Are we going to get new kits any time soon?
A: We are working with our character art department to put this on the schedule for Season 4 or shortly. While it is mostly cosmetic, there are some implications with the Ground Combat update in that some of the powers on these kits may change slightly and we want the new kit geo to reflect those changes.