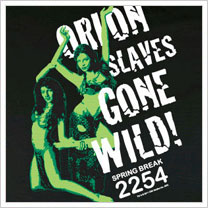 This past weekend the official Starfleet Academy Store released a selection of new “Spring Break on Risa” themed merchandise. The new offerings include items for both women and men, such a “Romulan Ale Pong Champion” t-shirt, an “Orion Slaves Gone Wild” t-shirt, a beer koosie, and more.

The items are available exclusively at the Starfleet Academy Store.