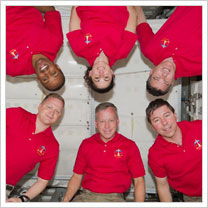 This morning at 3:23 am EST the crew of STS-133 on Shuttle Discovery were awoken by the original Star Trek theme song which included an all-new voiceover recorded by Captain James T. Kirk himself, William Shatner.

These have been the voyages of Space Shuttle Discovery. Her thirty year mission to seek out new science. To build new outposts. To bring nations together on the final frontier. To boldly go and do what no spacecraft has done before.

Discovery is due to land in California on Wednesday after 11 days in space and will be decommissioned later this year.

Below is a Shuttle Discovery montage video set to the new voiceover.