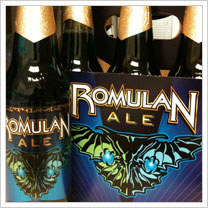 I spoke with the folks at GK Skaggs, the distributor of the Romulan Ale bottled beer, today. I was told that the popular blue beer stopped being produced in December 2010. Currently there are no plans for it to be sold again.

Romulan Ale was available at Quark’s Bar as part of Star Trek: The Experience at the Las Vegas Hilton, until it’s closing in 2008. The lager was also sold in packs of six and available at liqueur stores, primarily on the west coast, most notably BevMo.