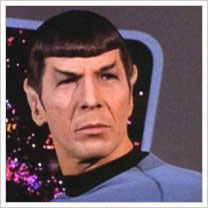 Star Trek’s original Spock, Leonard Nimoy recently sat down with startrek.com to look back at his history with the franchise and his future. Below is an excerpt from the first part of the questions Nimoy answered.

Let’s start in the present, go back to the past, and then look to the future. So, first, you gave some people a scare a few months ago. What happened and how are you feeling?

Nimoy: Yeah, I had a surprise. (Laughs). That’s the best way to put it. I was in Massachusetts, North Adams, Massachusetts, to do a presentation at the Massachusetts Museum of Contemporary Art. They had an exhibition of my photography that was up for several months and I was there to give a talk. I was at a hotel across the street from the museum. I was set to go over in an hour or two and I suddenly started having severe stomach pains. And instead of going to the museum I went to the hospital and I had some colon surgery. Fortunately, the hospital and the surgeon were excellent and did a very good job for me. The rest was just a story of recovery. I’m fine now. It took a few weeks because it was rather severe surgery, with a lengthy incision from down the middle of my chest into my stomach. But I’m fine and I’m fully recovered.

You’ve retired, but we keep hearing – including from you with your recent tweet – that more Fringe may be on the horizon. What’s happening with that?

Nimoy: I did it. One episode. I can’t say if William Bell will ever be back or if this is the finale of the season. I thought the character was finished, but they came up with a wonderful idea.

Nimoy: I don’t have either answer, season or series. I have been through many resurrections in my time!

You still attend the occasional convention. Why? Is it kind of a thank you to the fans at this point?

Nimoy: That’s exactly what it is, a thank you. I still feel an obligation to be out there for them, to tell them the Star Trek stories and to bring them up to date on what I’m doing. There’s still a lot of interest. I don’t know when I will stop doing this. I think there is an end in sight. I will not going on doing it indefinitely, but I am scheduled for three or four events for this year.

You’ve spent years now taking photographs and have published several books and had your work displayed at museums. What do you get from creating, arranging and snapping a photograph that you don’t from any other art form?

Nimoy: The photography is a useful outlet for me, for creative ideas. I can get an idea and execute it on my own. I don’t have to deal with large-budget issues and scores of people. I don’t need to bring together writers and designers and very many performers. I don’t need to be away from home for weeks and months at a time. It’s a comfortable way for me to express ideas and to remain creative without it totally taking over my life. My personal life is very valuable to me. I enjoy my family a lot. I enjoy my personal time with my wife a lot. I don’t want to be away. I don’t need or want to do that.

Any other books on the way?

Nimoy: Not right now, no. The most recent one was a catalog of the Secret Selves project, which is still very current. That show will be moving around to various venues. It was up at Mass MoCA for six months and it will be at other venues in the future. Right now, I would say that ideas are in the development stages, but I don’t have anything ready to go quite yet.

Star Trek aside, what other roles/performances/projects in your career are you particularly proud of and/or fond of? We’d suggest such works/projects as Alien Voices, A Woman Called Golda, Three Men and a Baby, your Ballad of Bilbo Baggins song…

Nimoy:  (Laughs at the mention of Bilbo Baggins). Apparently, the best known of all those is the Bilbo Baggins recording. I enjoyed doing that. It was a lot of fun. It’s a song aimed at kids. It was about 30 years before its time. We were way ahead of the cycle on the Hobbit stories. It was much, much later that the Rings trilogy was produced as films. I know that “The Ballad of Bilbo Baggins” has had a very active life on the Internet. I get a kick out of that. I think it’s wonderful. You’re right. I’d say A Woman Called Golda is something I’m extraordinarily proud of. I’d say Never Forget, which was a television movie that I produced and starred in for TNT. It was a true story about a Holocaust survivor who fought an organization that was intent on denying the Holocaust ever existed. I thought it was a very important project and we did get a Cable Ace nomination for it. I have some wonderful experiences along the way. I was on Broadway for 16 weeks in Equus. That was a Pulitzer Prize- and Tony Award-winning play. I toured the United States in my one-man show called Vincent, which was about Vincent Van Gogh, and I thought it was a valuable piece of work. So I have been given opportunities to do some very interesting projects and I’m very happy about it.