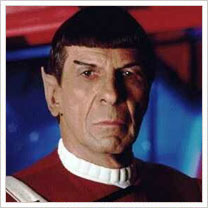 Star Trek’s original Spock, Leonard Nimoy recently sat down with startrek.com to look back at his history with the franchise and his future. Below is an excerpt from the second part of the questions Nimoy answered.

Had The Motion Picture tanked, how much, if any, of what subsequently transpired do you think might have happened anyway?

Nimoy: No, I think not. I think you’re right. The feeling was, after that first movie, there was something to be done with Star Trek, that the first movie hadn’t done what was available to be done, that there was still an audience, still an interest, but that it didn’t satisfy the audience in terms of content. And it cost too much. So, when they approached Harve Bennett with the idea of doing a second Star Trek film and asked him if he could do a Star Trek film for less, he said something like, “I can do two movies for the price you paid for that first one.” That was intriguing, and I think he actually did Star Trek II for even less than that. I think he did it for maybe a third of what the first film cost. I wasn’t privy to those conversations, but my understanding, my sense was that they felt that it was worth making a second film at a much, much lower cost to see if there was anything left in Star Trek. And frankly, when I heard about it, when they came to me with the idea of doing that second film, I thought they were just trying to squeeze one more movie out of the franchise. I thought that it would be the end of Star Trek and that’s why I accepted the idea of Spock dying at the end of Star Trek II.

Star Trek: The Motion Picture actually rose from the ashes of Star Trek: Phase II, the series that Paramount aborted when it became clear from Star Wars and Close Encounters of the Third Kind that sci-fi movies could be huge moneymakers. Phase II has been in the news again recently with stories about how involved you might or might not have been…

Nimoy: It’s being reported that Mr. Roddenberry offered me a contract to appear as Spock in two out of every 11 episodes of Star Trek in the ’70’s when there was a new series contemplated. This is true and (it’s) also true that I turned down the offer. I didn’t feel comfortable being hired on as a part-time player.

That’s interesting. Was that Roddenberry’s choice or was that Paramount trying either to keep costs down or hoping they’d entice you with a less exhausting schedule?

Nimoy: Since Mr. Roddenberry is gone, we’ll never know. He was also hired to develop a series for me at Universal in 1971. It was called Questor (The Questor Tapes). When it was time to cast it, he chose Robert Foxworth instead.

Moving on to Star Trek II, what do you remember most about the reaction – fan, critical, cast, yours – to Spock dying?

Nimoy: It was very touching, very touching. I vividly remember the day we filmed the death scene. It was a very somber, emotional experience. I was very sad, concerned. When we came up with the idea of doing a mind meld on Dr. McCoy, on DeForest Kelley, I was asked if I could say something in that mind meld that would give us a hook for the future, in case there was a possibility of continuing. And I came up with the word “Remember,” which I thought was broad enough and interesting enough that we might be able to use it as our hook in the future. And it worked. But at that particular moment in time there was a real sadness. There’s an understanding that, “Look, who knows, something positive might come out of all this,” but we really playing a very serious death scene and everybody was quite moved by that.

Star Trek III was your first feature as a director. How at home were you behind the camera? Did you feel like you had training wheels on? And how satisfied were you with the finished film?

Nimoy: I was very comfortable shooting the movie. I did feel that I was being quite controlled, I guess is the word. I was made to justify everything that I did and explain everything that I was doing, which took a lot of energy. And I resented it. It bothered me that I was being so carefully monitored because I really felt that I knew what I was doing. I thought the script was workable and did what it had to do, which was to find Spock and get him back on his feet. I thought it was an interesting idea, the whole idea of the Genesis planet evolving and Spock’s remains evolving with the planet. It may not have been as much fun a film as some would like, but I thought it did the job. It did it what it set out to do. Maybe, in retrospect, we might have found a better story or construct, to get that job done. But we got the job done and the film was OK. At the box office, it did what was becoming the pattern for Star Trek films. It about the same as was expected, so it was OK. It was not a gigantic runaway hit, but it was not considered a failure. And it was strong enough that they decided to go ahead and make another one after that.

Star Trek IV was the most successful of the TOS features on several levels. Did you just have a sense that the film could tap the zeitgeist?

Nimoy:  Yeah, I was very, very confident with that film. I made a big commitment to the development of that story. I stayed on the lot for the entire time. When Star Trek III was finished, even before it opened, Jeffrey Katzenberg, who was the head of production at the studio, called me and said, “We’d like you to make another one.” I said, “I need to have some more freedom. I felt too tightly controlled on this last film. I need to have some freedom to explore some ideas and do my own movie.” And he said, “The training wheels are off. Make your own film. Give us your own image of what the film should be.” I spent a lot of time on it. I did a lot of research. I did a lot of reading. I did a lot of traveling. I went to the East Coast to meet with various scientists and to talk about what they were interested in as possible ideas to explore in the future. It was all very helpful and it all found its way into that movie in one way or another.

But I did not let myself get distracted by going off and doing a lot of other kinds of work during that development period. I was on the lot most of the time and at the desk working or talking or exploring or reading or trying to develop the story. The whole whale thing presented itself excitingly, but it presented certain challenges, too, because there was not a lot of good humpback whale footage available to us. So it became a matter of whether or not we could create that footage successfully with miniatures and digital images and (real) footage and so forth. So there was a lot of work to be done, but once the ideas fell into place it became very exciting. When the script was done, between myself and Harve Bennett on the story, and Harve and Nick Meyer doing the screenplay, I was very, very excited. I thought, “We’ve got a very strong film here.”

Also, Ned Tanen was now the head of production at Paramount. Jeff Katzenberg and Michael Eisner had gone to Disney. So Ned Tanen was the person who read the script and gave us the green light. He called me and said, “Let’s have lunch.” And during that lunch he said, “I would make this film even if it wasn’t a Star Trek movie,” because he felt so strongly that the script was a tight, successful and exciting story. I really had a great time making that movie.

Star Trek V was, for all intents and purposes, William Shatner’s movie, so let’s move on to Star Trek VI. Was it time to say goodbye? And were you satisfied with the justice the story did to the franchise and cast?

Nimoy: I had some other wishes for Star Trek VI. I had some other hopes that weren’t realized. I thought the film served its purpose, again. It didn’t create any problems for us, but it didn’t quite accomplish what I’d hoped.