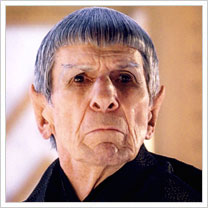 Star Trek’s original Spock, Leonard Nimoy recently sat down with startrek.com to look back at his history with the franchise and his future. Below is an excerpt from the third part of the questions Nimoy answered.

Eighteen years had passed since you last played Spock in Star Trek VI, and along comes J.J. Abrams’ movie. Looking back at it, how satisfied were you with how Spock Prime was worked into the story?

Nimoy: I had a great time. I thought that J.J. and his writers had captured the essence of the fun of the Star Trek characters, the chemistry between the people, the excitement of becoming part of that crew and going out on this adventure. I thought it was a great ride as a film. I was pleased with how they treated the Spock character. I thought that they really got it. When they first called me and asked me to come to a meeting, I went to meet with J.J. and Orci and Kurtzman, and the conversation was very moving to me, because I thought these guys really understood what an audience really loves about Star Trek and what an audience loves about the Spock character. I was excited and I said, “Yes, put it down on paper. Send me the script. I’m very interested.” When I read the script I called J.J. immediately and I said, “Let’s go. Let’s go to work. I love it.” I had a great time doing it.

How much closure did it provide you?

Nimoy: I finally got a real good sense of closure for myself with Star Trek, and I was very happy to see Zachary Quinto take over the character. I think he’s an excellent, well-trained actor and excellent for the job.

Some fans loved the alternate universe concept, as it will free the writers and actors to go in any direction, while others disliked the breaking of Star Trek canon that resulted, particularly the destruction of Vulcan. What are your thoughts on the debate?

Let’s says that Abrams, Orci, Kurtzman and/or Damon Lindelof come to you and say, “Leonard, we have an equally good part for you in the next film. Please come join us again.” What would it take to convince you to get on board?

Nimoy: (Laughs). I’m not expecting that. That’s very hypothetical. I’m really not expecting it to happen. I think I was useful in the last film and I think for me it really was the last film. I think the torch has been very successfully passed to a bunch of very talented young people, and not just Zachary, but Chris Pine and all of them. I think they’re very talented and will have a lot of fun, and I wish them well.

Nimoy: Wow. (Laughs). There was a beer advertisement that ran in England some years ago, where they used the Spock character in a very funny way to sell Heineken beer. It would take too long to describe it, but it was really a funny and strange juxtaposition.

We know you have a vast collection of Trek memorabilia at your house. What’s the prized piece in the collection?

Nimoy: Well, I still have the pair of ear tips that I wore the last day that we filmed the Original Series. I have a couple of others which I have held for my children and grandchildren, a handful of other ear tips. But the ones that have a lot of significance for me are the ones that I wore the last day when we finished filming TOS. I took them because I thought, “This is my memento.”

Who is the unsung hero of the original Star Trek? Gene Coon? Bjo Trimble? Them and others?

Nimoy: Well, there are several. Bjo certainly is one of them. She was very instrumental in helping us get back on the air after we’d been canceled at the end of the second season. Bob Justman, one of our line producers, was terribly important to us. He was very helpful. He was a very substantial, ethical, talented man who was able to, in the midst of chaos, lend you a good ear if you had a problem or an idea. I could go to him and expect some reliable help. Gene Coon made a gigantic contribution to Star Trek with the scripts he turned out. If I remember correctly, he introduced the Klingons and gave us some wonderful stories. Those are few of the people who made major contributions. Joe Pevney and Marc Daniels directed some of our greatest episodes and both had a great theatrical flair and brought a lot to the look of the shows they directed.

One name we’ve not brought up during this conversation is William Shatner. How would you describe your relationship with him?

In this article:JJ Abrams, Leonard Nimoy