I’ve been a fan of Star Trek for most of my life (ignoring a few embarrassing “Star Wars Rulez” years), so when the opportunity to write for TrekNews about the funnier side of Trek came along I was understandably excited. After wracking my brain for something appropriate to start with, it hit me: 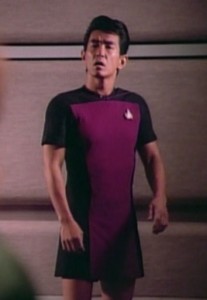 Skirts. … but let me back up and explain a bit, dear reader.

My fiancée and I have been re-watching Star Trek: The Next Generation together, and as much as we both LOVE us some Trek, we’ve realized there are some things about it you just have to chuckle about. Since we just finished the first season of TNG, the one that I’m fixating on currently is the “skant” (or, as I call it, the creepy man-skirt). If you haven’t noticed this thing, you owe it to yourself to dust off your DVDs and witness the horror. If you don’t have that level of patience when it comes to experiencing awkwardness, scope this gent out:

Don’t feel bad if you’re confused; he clearly is, too, and going by all that red this guy was going into COMMAND. Now sure, I can get behind the idea of gender equality in the future; one of Star Trek’s biggest selling points for me is its utopian future (full of robot zombies and lasers and explosions). Seriously, though, can you imagine the string of memos that must have accompanied this thing’s roll-out?

To all design department heads: In order to better promote unity among our fleet personnel, Command has requested a redesign of the standard duty uniforms. It is our hope to find a style of uniform that will meet the needs and styles of our many male, female, and androgynous crew members alike. We believe that the best source of inspiration for the future often comes from the past, and so we suggest (to you, our trusted and talented design team) that we revisit the cut and style in use during what many consider to be Starfleet’s Golden Age (circa Stardate 4523.3).

We eagerly await your thoughts.

How about we make a uniform with no pants?

To: All Commanding Officers
From: Starfleet Command, Committee For Improving Morale & Equality
Stardate: 41153.6
RE: Fleet equality and unity

We at Starfleet Command are excited to present to our personnel throughout the Federation the latest innovation in uniform design: The Skant. Now the comfort and freedom of movement previously only offered to our female officers is accessible to all. We are eager to see this uniform option made available to all who serve aboard Starfleet vessels and on Starfleet installations, and are sure it will be embraced by officers of every rank and department.

seriously? i’d rather die than be seen in that

Will, I’m not wearing that again.

Upon requests from Engineer Argyle and others, it is now ship-wide policy that only one person may climb access ladders at a time; the new uniform option has been creating some awkward situations in Main Engineering as well as other areas of the ship. Please advise your staff and report any difficulties to me. Thank you.

… and so on, and so on, until they finally (apparently) discontinued the thing sometime during the early second season. Everyone made a pact to Never Speak Of It Again, and that was that (until the internet arrived and started unearthing ancient horrors left and right). I’m absolutely for gender equality and everything, but I think the skant might have been going in the wrong direction with it. I think uniforms without pants are probably best forgotten, left in the future’s distant past.

After all, as excited as I am for that future to get here, I wouldn’t want to have to shave my legs any more often than I already do.