Over the last four days <a href="https://www.americancinematheque.com/" target="_blank">American Cinematheque</a> presented all six original <em>Star Trek</em> films at The Egyptian Theater in Hollywood, California. TrekNews was on hand Sunday night for a screening of <em>Star Trek VI: The Undiscovered Country</em> shown in glorious 70mm format. 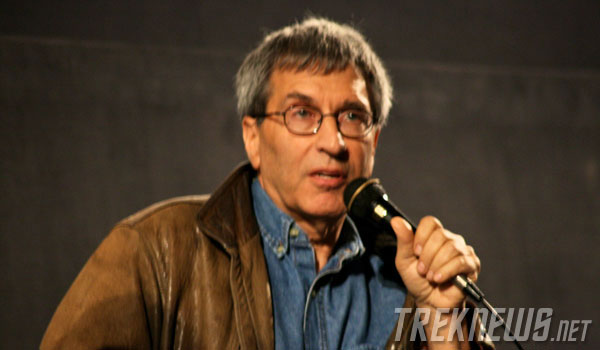 This past weekend, American Cinematheque presented all six original Star Trek films at The Egyptian Theater in Hollywood, California. TrekNews was on hand Sunday night for a screening of Star Trek VI: The Undiscovered Country shown in glorious 70mm format.

When asked about his reworking of the script for The Undiscovered Country, Meyer mentioned this took place over the course of just under two weeks, jokingly referring to them as the “twelve days of Christmas.” He went on to discuss being brought into the Star Trek franchise by producer Harve Bennett.

Meyer was largely unfamiliar with the Star Trek franchise when he signed on to direct Star Trek II: The Wrath of Khan, and noted books are a large inspiration on all of his work, especially Shakespeare, saying, “All I really do every day is read.”

‘I don’t think I thought that one through completely at the time.’

Meyer discussed watching the film today, now twenty years after its release, and reflecting on all of the political allusions in the film, referencing the Klingons as stand-ins for the Russians during the Cold War.

He went on to discuss how the film plays very differently for him today than it did in 1991, citing the scene where Spock extracts information from Valeris through forced “mind suck” as torture. Meyer said, “I don’t think I thought that one through completely at the time.”

Meyer described the dinner scene as being “very fun to shoot.” Especially with all of the blue food. He praised Christopher Plummer’s performance as General Chang, mentioning this was the first time he wrote a character with a specific actor in mind to play it. He added he was especially proud of the zero gravity assassination scene on the Klingon ship and he initially wasn’t sure how they were going to create the floating blood.

He mentioned that he didn’t originally understand how much the material meant to not only the fans, but also the crew, when people began to cry while they shot some of the final scene of what would be the last film starring the cast of the Original Series. Today, Meyer said he feels much more connected with the franchise.

Interaction with Star Trek creator, Gene Roddenberry was minimal throughout the production of the film. Meyer said during one of their meetings, Roddenberry was incensed that the crew was being portrayed as possibly racist, and invoked his belief in the perfectibility of man. Meyer said that looking back, he’s troubled by his actions during that meeting, adding that Roddenberry died just three days after seeing the film and the death was the reason the film is dedicated to him.

When asked what a modern Star Trek film would look like under his direction, Meyer noted that the upheaval in the Middle East and “ideas you can’t stop” would be possible considerations.

Over the course of the discussion, Meyer was very cordial and friendly, joking with the audience throughout.