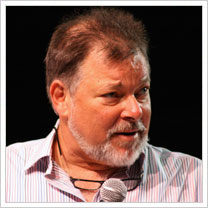 Jonathan Frakes, who played Lieutenant Commander William Riker in Star Trek: The Next Generation, revealed in an interview with UGO that he had once pitched a Star Trek project to CBS and Paramount, which was turned down by the studio.

“I had a Star Trek [project] that I developed for TV, and we were told in no uncertain terms that they said no to Bryan Singer television Star Trek, they said no to a William Shatner television Star Trek.  They feel at CBS Paramount that they don’t want to make the same mistake that’s been made before, which was watering down the brand by having a TV show and a movie.  That’s what happened with Star Trek: Nemesis, and that’s why I think Star Trek: Enterprise didn’t last the way they expected to.  It was the classic corporate greed of “we’ve got something good, so let’s continue to milk it” and we milked it so dry that the fans had no appetite for a movie.  So I think what they’ve done by taking time off before the Abrams Star Trek, and they’re doing it again because they haven’t even begun to shoot the second one, is a much smarter business plan. Much to my chagrin! Not that wouldn’t love the Titan, or the Rikers in Space, or any of those shows on the air.”