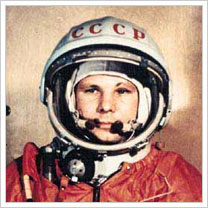 Today, April 12, 2011 marks the 50th anniversary of human space flight. On this day in 1961 Russian cosmonaut, Yuri Gagarin made a 108-minute orbital flight in the Vostok 1 spacecraft, becoming the first human in space.

NASA launched STS-1 on April 12, 1981, piloted by Robert Crippen and commanded by John Young. This was the only US manned maiden test flight of a new spacecraft.

Today we salute everyone who dares to look upward and onward. Keep reaching for the stars!

Below we’ve embedded footage of Yuri Gagarin’s historic flight. While I’m not so sure the best choice was made with the soundtrack, the archival visuals more than make up for it.