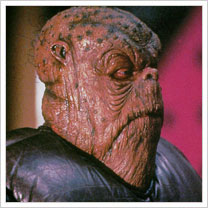 Below is a sampling. The full interview is available in two parts at the official Star Trek site.

Give us a quick sense of what your life was like before DS9?

Shepherd: I graduated from Roger Williams University with a Bachelor of Science degree and then studied music, video, motion graphics, editing, Tái chi chuan and theater at CalArts, a dream school started by Walt Disney. After that, I was looking for a job and basically took whatever I could get at the time to support myself. I worked as a photographer’s assistant G5 at the local V.A. medical center. I was doing some production work and took any acting jobs I could find. In March of 1992, I was working on a David Lynch project called On the Air. It was based on live television of the 50´s and 60´s. I worked on it in March, I guess, for about six weeks or so. It premiered in July. It showed three episodes and then On the Air was off the air. I thought it was funny, but unfortunately it didn’t fly with the networks.

You soon after went in and won the role of Morn on DS9. What did the producers tell you about the character in advance? Did they say it was a one-off or recurring?

Shepherd: Not a word. OK, maybe sometimes. Usually, I was the last person to find out anything. And it always seemed to be an “Oh, by the way, you’re doing such and such in the next scene. Can you do that?” And I´d always reply, “Sure, I can do anything you want.” I think that they always had in the back of their minds that if I worked out that they would continue to use the character. Working in a full makeup like that for 12 hours is challenging for anyone, but finding someone to work for seven years in that kind of outfit with makeup is difficult. Most actors don´t want to do it.

Did they tell you you’d have no dialogue?

Shepherd: The circumstances surrounding my first day on the show were so unusual. When they shot the bar scene in Quark’s where Morn is telling the funniest joke in the universe, they told me I could go ahead and tell my joke. And when Sisko gets off of the turbolift and just as he walks towards Quark’s, if you listen carefully to the background sound you might actually hear Morn saying “Finalism finger fink. Obligatory quotient yokefellow, coconut kachina cosmological argument. Bank swallow fish story, inculpate minuteman. Stress certifier in lecithin. Hard-hearted dill, divine minded domineer, mind reader sextuplet, garden fly honey suckle garbage. Palter rimfire, green peace. Change is the ultimate solution. Twenty-fourth century humor. You may not get it right away.”

In the book The Making of Star Trek: Deep Space Nine, the first chapter of the book is “The Funniest Joke in the Universe” and it is about exactly that and how I came to be on the show. That was the only time I got to say anything while the cameras were rolling, but it´s not the only time that they considered Morn for a speaking part. There have been numerous scripts where they originally had Morn speaking. One such script had to do with the alternate universe. Unfortunately, they always got written out.

Before the writers filled in details about the character in actual episodes, did you create your own back story for him?

Shepherd: I didn’t have any preconceived notions about Morn. The first two years I worked on the show I didn´t have a car, so whenever I worked I always had to take a bus to Hollywood the night before and stay up all night in a Denny’s restaurant or the Insomnia Cafe´ drinking coffee to stay awake. So, when I worked, I didn´t get any sleep. It was all I could do not to fall asleep while I was on the set. There was even an occasion where, in the pilot, after two days with no sleep, a 110-degree heat wave and no air conditioning on set, I started to fall asleep standing up. A group of guys came over to me and, after asking me if I was OK, said that they were taking bets on whether or not I would fall over. Whenever the writers talked to me I was always interested in what they would tell me next. I think mostly I just tried to keep an open mind and have a good sense of humor about the role.

Which episodes did you enjoy most, and why?

Shepherd: I grew up watching the original Star Trek series. Kirk and Spock were my heroes. So whenever I got a call to come in I was excited to be there. One time I got a call to come in for a fitting for Morn. Now, it wasn´t a fitting for Mark, it was a fitting for Morn. I thought that was funny. So when I came in, they put my makeup on first and then sent me to the wardrobe department. I found a tailor waiting for Morn to fit Morn for a tuxedo. I don´t remember the name of the episode, but it was somehow based on “Our Man Bashir,” where Morn is wearing a tuxedo, comes out of the holosuite and walks down the spiral staircase. Quark is shaking a drink and Morn says “Shaken but not stirred.” Unfortunately, at the last minute it got cut. I think I enjoyed “Who Mourns for Morn” the most, though, and especially when Morn comes back to the bar after faking his death, (and also) the introduction from Odo and the surprise of Quark and his reaction when Morn regurgitates a shot glass worth of liquid latinum and gives it to Quark for his trouble. That was a proud moment for me.