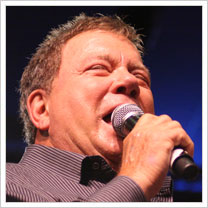 As most fans of Star Trek know, William Shatner has been many things: Starship commander. Police sergeant. Womanizing lawyer. Dad who says $#*!. What many may not know is that he has also had a long and storied career in music (or “exaggerated interpretive reading,” as Wikipedia would say). We’re mentioning this now because yesterday Mr. Shatner announced via his website the track listing for his new album, Searching For Major Tom, which is due out later this year on Cleopatra Records.

2. She Blinded Me With Science Originally By Thomas Dolby – Bootsy Collins Is On As The Guest Bassist. Patrick Moraz (Ex Yes And Moody Blues) Is Guesting On Keyboards/Synth.

3. In A Little While Originally By U2 – Manuel Gottsching From Ash Ra Tempel Has Added Guitar.

5. Lost In The Stars As Done By Frank Sinatra – Jazz Legend Ernie Watts Is On Guest Saxophone.

10. Spirit In The Sky Originally By Norman Greenbaum – Peter Frampton Has Played Guitar On This Track.

11. Bohemian Rhapsody Originally By Queen – John Wetton From Asia Has Played Bass And Done A Vocal.

13. Major Tom Originally By Peter Shilling – Nick Valensi, The Guitarist From The Strokes Has Added Guest Guitar To This This Track. Also Zakk Wylde (Ozzy Osbourn, Black Label Society) And Mike Inez (Alice In Chains) Have Contributed To This Track.

14. Learning To Fly Originally By Pink Floyd – Edgar Froese From Tangerine Dream Has Played Guitar And Keyboards On This Track.

15. Mr. Spaceman Originally By The Byrds – Dave Davies From The Kinks Has Added Guest Guitar On This Track.

16. Iron Man Originally By Black Sabbath – Zakk Wylde (Ex Ozzy Guitarist) Played Guitar And Did A Vocal On This Track.

18. Walking On The Moon Originally By The Police – Toots of Toots & The Maytals Has Added A Guest Vocal.

19. Mrs. Major Tom – Female Singer To Add A Track -To Be Announced