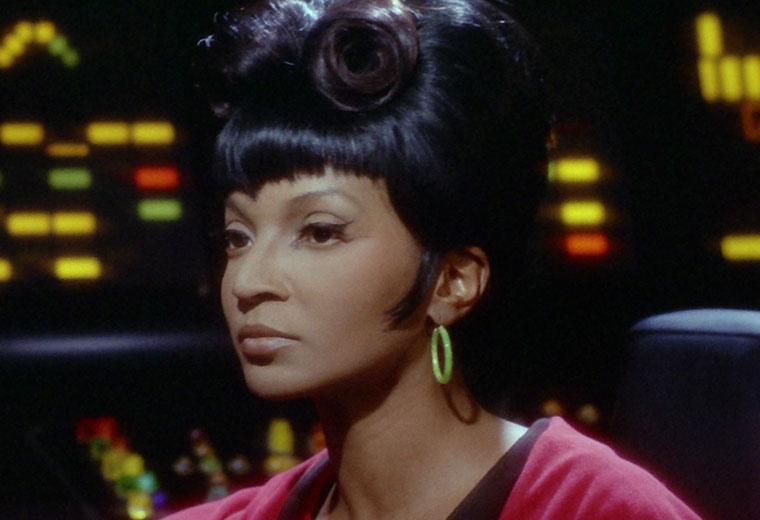 Imagine you’re Uhura, the ultimate Federation female. You’re a Lieutenant of the Federation, smart and confident enough to play with the big boys. You are an integral part of the crew, you speak multiple languages, and you look GOOD. You’re the only woman on the bridge who isn’t there to bring the captain his coffee, but you can still find time to sing a little tune to break up your day. You’re stuck in a skirt so short that you can barely cross your legs without showing some regulation underwear, but your sheer competency earns you the respect of your all-male group of peers. 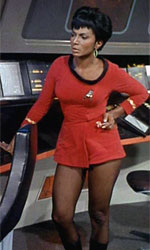 With a career like Uhura’s, I bet you would never imagine that your intellect, your memories, the very things that have made you who you are, could simply be wiped clean. That’s exactly what happens to her, though, in The Original Series’ season 2 episode, The Changeling. In it, an old Earth space probe, Nomad, is found to have “sterilized” the entire population of the Malurians, who had numbered in the billions, while leaving no traces of their civilization behind on the now-uninhabited planet. While searching for traces of the Malurians, the Enterprise is also attacked, leaving its shields decimated.

So, Uhura opens hailing frequencies, and using the translator, Kirk greets the strange entity who has caused so much damage to the ship. Luckily for Kirk, his name sounds so similar to the creator of the entity that the attack is broken off, and the entity is beamed aboard. Once aboard, they learn that the entity is called Nomad. Nomad had been an early probe launched from Earth by his creator, Jackson Roykirk, a famed Earth scientist who dreamed of creating a “perfect thinking machine, capable of independent logic,” according to Spock. Long believed to have been destroyed in a meteor collision, the unit Nomad instead had sustained damages which were repaired through its merging with “the Other,” Tan Ru, originally an alien probe of enormous power intended to sterilize soil samples. When the two merged, Nomad altered his original protocols and became a tool for destruction of any imperfect life forms, which included the entire race of Malurians.

This deadly changeling quickly makes its mark on the Enterprise — seeking to perfect the ships functions, it decides that the efficiency of the vessel could be improved by messing with the engines as well as the crew. At least four unfortunate Red Shirts have to die while Nomad methodically investigates the ship’s imperfections. Among these imperfections are Scotty, who makes the mistake of touching Nomad’s screens in an attempt to get him away from Uhura. Uhura, guilty only of singing on the job, has her mind wiped by Nomad because it determines her to be “defective.”

This is where it starts to get me. Scotty is quickly brought back to life by Nomad under orders of his “creator,” but Uhura’s memory has been wiped, and Nomad is unable to restore it. While much is made of Scotty’s temporary condition, Uhura is left under the care of Nurse Chapel. I guess that the crew isn’t too concerned with having yet another brainless female around. 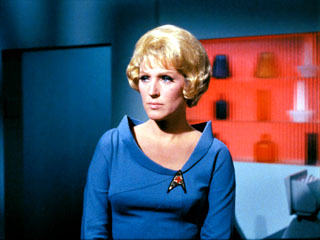 Poor Nurse Chapel. First she has to put up with the death of a crewman, and then see the crewman suddenly reanimated, but instead of putting her medical knowledge to use by studying the phenomenon with Bones, she gets the lovely task of reeducating Uhura. “See… see spot… see spot r-r-r-run!” Gee, I guess it’s a good thing that Uhura retained her knowledge of both English and Swahili- one can’t expect Nurse Chapel to do everything. We are left to assume that Uhura is able to regain all of what she has lost- who needs childhood memories anyway? However, this is never clarified, and during her absence, another nameless woman in a short skirt takes her post. Kirk is assured that Uhura will be “back on the job within a week.”

A week? One week to relearn an entire lifetime of the skills and knowledge it would take to become the communications officer aboard a Constitution-Class starship? Wow. Now, imagine if roles were reversed and Scotty had had his mind erased. I imagine it would take years to relearn his vast skills and knowledge — but Uhura gets a WEEK and she isn’t even provided with a real teacher. Instead, that traditionally female role is foisted upon Nurse Chapel, whose skills no doubt would be of better use in her FIELD.

Of course, to the unfortunate plight of these ever-ready females, the episode never returns. So, however ill-used, Lieutenant Uhura and Nurse Chapel will be back in the next episode, ready to take on whatever unfortunate fate that is too lenient to befall a Red Shirt, but too harsh to befall a REAL crewperson — a crewman. 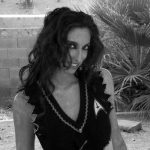