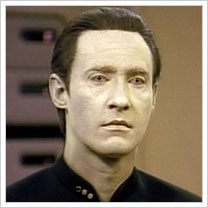 Last week I talked briefly about William Shatner’s new album, “Searching For Major Tom,” and how not many fans may be aware of his storied musical career. Even fewer fans may be aware that Admiral Kirk is not the only talented Trekker; putting together a “Star Trek Sings!” show would be pretty easy to do:

If you thought Data belting out “Blue Skies” at the Rikers’ wedding was an isolated incident, prepare to have your mind blown. We start with Brent Spiner, because there’s just something totally wild about everyone’s favorite android crooning “archaic musical forms” … and as good as he is, it’s impossible NOT to hear him as Data when you listen. Not that he’s trying to avoid that, of course: I know it’s an homage to Frank Sinatra, but c’mon. “Ol’ Yellow Eyes.”

… more than anything, though, you know it has to be amazing because the only new copy currently available on Amazon.com is going for $260 (shipping is a steal at $2.98, though).

I admit to being a bit less familiar with this group, featuring Vaughn Armstrong (Admiral Forrest on Enterprise), Casey Biggs (Damar on Deep Space Nine), Richard Herd (Admiral Paris on Voyager), and a handful of other talented show-biz alums. I’ve heard from Trekkers more in-the-know that they’re quite enjoyable and that they frequently perform at major conventions. Their song about Mr. Sulu is pretty excellent (it was worth visiting MySpace to listen to, if that tells you anything). Their setup sounds a bit like the start to a really bad Trek joke, though: “Two admirals, a Cardassian, and their friends walk into a bar…”

I wasn’t going to include James Darren (Vic Fontaine on Deep Space Nine) at first, since he was actually a singer BEFORE being cast in a Trek series… but at the eleventh hour I decided this list would be incomplete without him. Darren was a singing teen idol in the sixties, and (as my mother loves to remind me) played the character Moondoggie in the original Gidget movies. If “Moondoggie” doesn’t sound close enough to an old TOS alien for you, he was also apparently in T.J. Hooker, so the Shatner Connection remains legit.

Now we get to the big guns (no sleight intended to Damar, there). Most of my experience with the music these gentlemen have graced us with comes from listening to bits of “Golden Throats: The Great Celebrity Sing Off” or an old throw-away gag from a “Freakazoid” cartoon. There is so much more, though; so very much more:

So next time you’re watching Star Trek, remember just how much talent our favorite performers have beyond simply pushing buttons and throwing themselves out of chairs when the photons hit. These folks can SING. In the meantime, I’m going to get started on setting up that “Star Trek Sings!” show… with luck, it’ll even be ON ICE.

In this article:Brent Spiner, Federation Follies