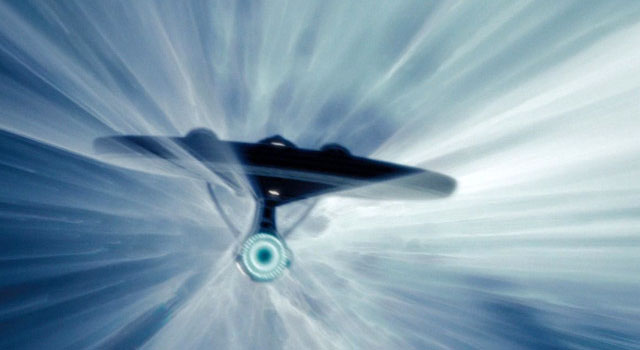 Welcome to the first installment in a web series of reviews entitled: Science Fiction or Science Fact, in which I will assess the credibility of Star Trek’s popular technological concepts and themes to determine whether they are just science fiction…or if indeed they are “science facts” (rather, that they are scientifically plausible). For this week’s analysis, I will introduce the science of faster-than-light travel and ultimately determine whether or not Mankind can “boldly go where no man has gone before.”

Many science fiction series include futuristic concepts and highly advanced technologies that either complement today’s scientific understanding of the universe or, as is usually the case, contradicts it entirely. Fortunately, Star Trek is the type of fiction that tends to fit the former description. Many of the themes and inventions show-cased in Gene Roddenberry’s vision of the future not only have a basis in fact, but they potentially push the very boundary of our technological limits. Does this mean that everything on Star Trek is truly possible?

Unfortunately, no. There are certain limitations we cannot overcome, either because the technology would never be possible or simply because science doesn’t allow it.

Albert Einstein’s Special Theory of Relativity redefines the relationship between an object’s momentum and its apparent velocity; essentially, it states that no object of a finite mass can ever travel at or faster than the speed of light because an infinite amount of energy is required to maintain an object’s momentum at luminous speeds. Even protons cannot travel faster than 99% of the speed of light. This seems to suggest that faster than light travel is impossible—if one of the smallest particles in the universe can’t break the “light barrier,” how could a starship? 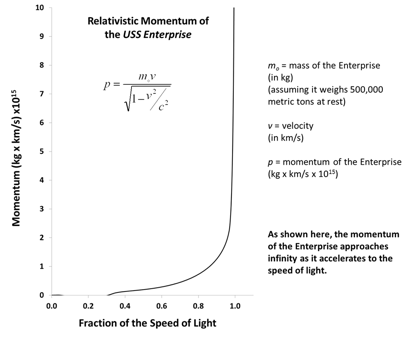 While it is impossible to accelerate an object to light speed using conventional physics (i.e. using rocket propulsion), an engine with the ability to warp space around an object so to bring it closer to its destination faster than the speed of light without ever breaking the rules of special relativity is theoretically possible. Herein lies the key to the warp engine.

One of the stranger facets of Einstein’s theory of relativity is that space and time are interconnected in a non-Euclidean continuum (not to be confused with the Q Continuum). This is harder to explain in words and the mathematics illustrating this concept are even more complicated, but to best imagine a space-time continuum in the relativistic sense, space can be described as a curvature, and that gravity is the tendency of objects to fall into the curvatures of space-time.

This quick video demonstrates how gravity is caused by warps in space-time the same way a bowling ball would warp the two-dimensional surface of a trampoline:

A scientist named Miguel Alcubierre theorized a method of faster than light travel using this same concept of space-time curvatures. He theorized that if one were to warp space around an object in such a way that the object were enclosed by an expansion of space behind it and a contraction of space in front of it, then the “warp bubble” could move at the speed of light while the object remains “motionless” inside this warp bubble. In a manner of speaking, it is not the object that moves; it is space that moves. Alcubierre’s warp theory circumvents the problems that arise from traveling at relativistic speeds. 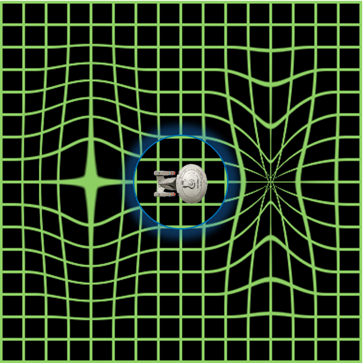 In the above image, space is contracted ahead of the Enterprise-D and expanded behind it; the warping effect is what would allow the starship to travel at the speed of light without violating relativistic physics.

Drs. Cleaver and Obousy at Baylor University theorized that an application of String Theory in conjunction with Alcubierre’s warp drive may be the final key to traveling faster than the speed of light. Theory suggests that oscillations at the 11th dimension of space (from which dark energy is believed to originate) could simulate the faster-than-light expansion of the universe as predicted to occur at the moment of the Big Bang. Should such a warping effect occur in the space surrounding an object, the space and the object enclosed within it would travel faster than the speed of light.

The following video makes it easier to visualize the warp effect on a two-dimensional surface.

The final verdict on the warp engine: Science Fiction; though it is theoretically possible to travel faster than the speed of light, its energy requirement renders it impractical. The scientists from Baylor University state that in order to vibrate the 11th dimension at a magnitude great enough to create a warp bubble would require an amount of energy with a mass equivalent of Jupiter. Which means, in Cleaver’s own words, “we are still a…long ways off.” Until scientists can find a way to “harness that (kind of) energy,” we will never be able to reach the stars.

More information on Cleaver’s and Obousy’s predictions can be found in this Science Daily article.

An update on the status of the warp drive theory can be found at NASA’s website.