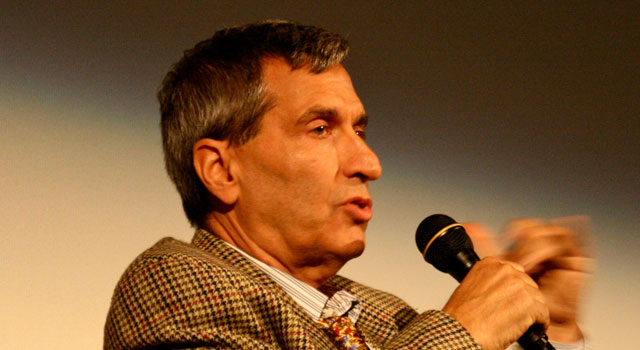 On June 10th, as part of the 2011 Hero Complex Film Festival, Los Angeles area Star Trek fans will have the opportunity to see two eras come together as praised Wrath of Khan director Nicholas Meyer shares a stage with members of Star Trek (2009) creative team of Alex Kurtzman, Roberto Orci and Damon Lindelof to discuss the 2009 blockbuster along with the 2012 sequel.

The $45 single day ticket will grant you access to a screening of Meyer’s Star Trek II: The Wrath of Khan, Star Trek (2009), along with discussion following both films hosted by LA Times writer Geoff Boucher.

The Hero Complex Film Festival will take place June 9-12 at the Mann Chinese Theater in Hollywood.

Both single day and full festival passes are available now through the LA Times website.

Below details for the entire festival.

Each event features legendary films in a rare full-length theatrical showing, plus a live discussion with the key creative talent for each film.
Special Sunday June 12 matinee showing of The Incredibles is free via non-guaranteed RSVP. Admission will be first-come, first served. Admission will be guaranteed to this event for Festival Pass holders.

Individual day ticket prices vary, based on number of films shown.
Festival Pass holders will enjoy admission to all events within the Hero Complex Film Festival (including any additions to the current schedule) plus will receive a free copy of the official Festival poster featuring original artwork by Mike Mignola.

Sunday June 12. Noon – The Incredibles free matinee
The Incredibles and sneak preview of select footage from Cars 2, plus discussion with Disney-Pixar Supervising Animator Dave Mullins. Festival pass includes guaranteed admission to The Incredibles. All others may submit non-guaranteed RSVP. Admission will be first-come, first-served at check-in on day of the event.

In this article:Nicholas Meyer, Roberto Orci