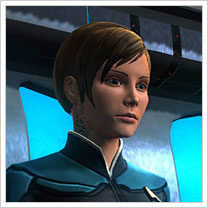 Below is a sampling of those answers.

Q: Darren_Kitlor Could you describe the Qo’noS neighborhood system in greater detail – what it involves for KDF players and also for Foundry use too?

A: We are completely remaking the Qo’noS planetary zone where Klingon players currently start the game. Previously this was an interior map, and now it is the courtyard and neighborhood around the Great Hall. This makes Qo’noS feel much more like a bustling city complete with back alley ways, a new shipyard, and the ability to walk from the primary exterior to various interior areas (such as the Great Hall).
We expect to have a number of mission givers in these neighborhoods that provide some flavor (I’m sure there’s someone in one of those back alleys who owes someone money). We will eventually add Foundry mission doors throughout the various neighborhoods on Qo’noS so that players can hook up their own Klingon city missions.

Q: Firix In your interview with 12th Fleet, we asked about increasing fleet size. Your answer was that the question should be about fleet alliances. So…Are there any plans for fleet alliances, and what are those plans?

A: No solid plans yet, only discussions about where we want to take Fleets in Season 5 and beyond. The suggestion of Alliances is in response to players wanting larger Fleet Sizes. While we don’t anticipate increasing the Fleet size cap, we do foresee a future where we can allow Fleets to both ally and declare war against one another as part of a larger Fleet Advancement system. These discussions are very early on and we don’t have any big details to share yet.

Q: pdidy What is the current status of the Andorian Kumari and Ambassador-Class ships?

A: Both of these ships are on our long term radar. I’d really like to see both incorporated into future Feature Episode series so that they can release when they do. Currently neither of these ships will be in game until after Season 4 releases, but we absolutely plan to have them in game in 2012.

Q: LtEliz Will there ever be a way to purchase Bridge officers that’s better quality than those for merits ?

Q: BluerockBeing04 What kind of changes will be made to tetryon, polaron, and transphasic torpedoes to make them all more effective?
A: In a previous Ask Cryptic I talked about how we recognize that some skill trees aren’t as desirable as others due to various damage types like the ones you listed. Our first task is cleaning up the skill tree so that putting points into these powers makes sense. Once we tackle that hurdle, we can start to talk about ways to differentiate power types more than we have. The new ground combat system is introducing some of the changes to power types that point in the direction we want to go.

Q: ConstitutionRefit When can we expect the rest of the Pre-Order items to hit the C-Store?

A: This depends on whether the length of terms with the individual retailers. Once we have clearance from the contract to put the items in game, we’ll find a way to get them to you via alternate means.

Q: Commadore_Bob Is there any chance we can have you revamp the Borg like you did with the Romulans and get rid of the “Night of the Living Dead” Borg and replace them with the Borg we remember from the shows? Will the Borg be used in any upcoming feature series?

A: Heck Yes! But we are doing both. We are revamping both the TNG Borg so that they have adaptive shielding and are more badass like I remember them being, and the newer Borg are also getting a revamp similar to what we did with the Romulans. As far as when will we see more of them? Very soon; and in big ways.

Q: Killer8472 With the addition of the TOS interior and the TOS dressed crew, does this open up the possibility of allowing us to customize the uniforms of NPC’s in other interiors?

A: Yes, it is a step towards that. It is on our 2012 goal list to allow players to select a “ship crew” uniform that crewmen on your ship interiors will wear.

Q: dorko1 I know that the refit is still a touchy subject, but could you guys shed any light on what might happen? I understand that there should be obvious misgivings about the idea of the Constitution class outmatching a vessel 200 yrs new and twice its size, but a replica that’s really more of an Excalibur class vessel might be able to add something to the mix.

A: You are correct that it is a touchy subject amongst the community and based on the discussions we’ve had with CBS about ships, I don’t think we’re going to put a high-end Constitution Class refit into the game. You can still have a lower tier TOS Connie use the Squad Leader feature to bring their stats up to a higher level, but the odds of an end game Connie refit is a long shot.