Ah, the American late 1960’s. Such an exciting time, full of conflict, protests for peace, arms races, and liberalizations of sexual mores- I am sorry I missed it, and not just for all the free love, concerts and drugs. It was an especially interesting time for women. We were embracing the power of our miniskirts, only a few years away from the braless 70’s. In pop culture, television was starting to go along with our rising ambitions. Star Trek especially was daring for its time, showing an empowered, intelligent and beautiful woman, Uhura, on the bridge.  However, we women had a long way to go in terms of our social progress being mirrored in pop culture.

As progressive as Star Trek seemed to be, it was still a TV show which was constrained in its futuristic vision of equality by the male-dominated worldview of the time it was aired. Uhura’s mere presence as a smart and much-needed crewperson was a giant leap for womankind. However, for each step forward, Star Trek seemed to take two steps back in their female characters. For a woman to have any power, there was always some mitigating precondition — that she be a brainless Eymorg capable of brainpower only at the consent of long-dead ancestors, for instance, or that she be a sociopathic scorned former lover of Kirk’s, bent on revenge for the wrongs she feels she has been dealt based on her gender, as was the case with Janice Lester.

Rarely does a woman join Uhura in the ranks of females who command respect based on their own qualities. Recently, though, I was re-watching an old TOS episode, and it dawned on me that there is one class of females whose power is rarely questioned- the Klingon female. I say “rarely,” though, because even the first Klingon woman we meet has to play that same tired role- the single-use sex object who inevitably needs saving.

In TOS, we meet the Klingon female for the first time on the episode “Day of the Dove.” Though she is introduced as the wife of the Klingon commanding officer, Mara proves herself to be more than just the captain’s wife. She is also the Klingon science officer, making her their version of Spock. In “Day of the Dove,” Mara, and her intellect, plays a pivotal role in the story. However, she still meets the common fate of many female characters- she is reduced to a helpless damsel in distress, powerless against the atmosphere of male aggression.

When both the Enterprise and the Klingons receive a false distress signal, they quickly become locked into an escalating conflict on board the Enterprise. Strange and impossible things are happening, as improbable events occur which place the Klingons and the crew at equal numbers, the better to fight each other. Hostilities are at such a level that the crew barely seems to notice how odd it is that their entire armory has been converted from phasers into antique swords. Testosterone is running high, clouding the senses of the crew. Especially affected is Ensign Chekov, who has some great lines- I especially enjoyed the creative use of the word “Cossacks!”

Chekov spends the entire episode in a state of heightened rage. Of course, we eventually learn that this is as a result of an evil energy cloud which feeds on aggression. This leads the crew to hack senselessly at their evenly matched Klingon enemies. However, no matter how many wounds are inflicted, no permanent damage is done to a single crew member. Sickbay is crowded with security officers, whose wounds heal rapidly, allowing the carnage to continue. Though the fighting is continuous, only one character is faced with aggression which could have left any permanent damage- Mara, the Klingon science officer. When the enraged Chekov comes across Mara, his lust for blood devolves into simple lust, and he rips at her blouse with one obvious intention. Unlike the female warriors we come to see in later incarnations of the Klingon woman, Mara seems to shrink away from this attempt, barely even struggling against Chekov, and has to have Kirk save the day for her. 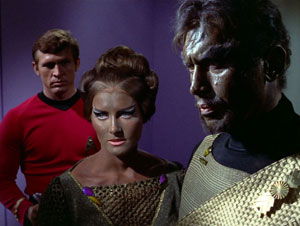 In light of what we come to know about the Klingon woman later on in other incarnations of Star Trek, the treatment of Mara is especially unlikely. It just goes to show what audiences expected at the time- even a strong and smart female like Mara could be easily diminished. Sure, she gets to be an educated and intelligent member of her ship’s crew, and she gets to wear shorts instead of a dress, but she couldn’t possibly have enough presence of mind to fight back against even attempted rape without a man’s help. I mean, even Janice, helpless stereotypical female extraordinaire, thought to scratch that bad boy up during her brush with male aggression!

Happily, as the Star Trek universe developed, the roles of women became less and less shallow. The next time we meet a female Klingon, we find that she is no shrinking female. Instead, a new class of badass women warriors rise to the challenge of overshadowing their predecessor, Mara. So, here’s to those women, characters created out of a time more advanced in terms of roles for women than the 60’s era Star Trek. I know who I’d rather be!