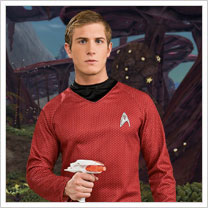 Personal Log, Stardate 5917.3: Only one day aboard ship, but WOW is it different than the academy! These Constitution class cruisers are titanic; the schematics they included with my duty orders don’t begin to do this ship justice. I’ve been assigned to operations, and I’m excited to get started… but I’m concerned there’s been some sort of mix-up with my uniform. Instead of the brand-new cardinal-red tunic I was expecting, I found a used uniform with (what I’m assuming are) phaser burns. I’ll be sure to speak to the ship’s purser in the morning.

Personal Log, Stardate 5918.5: First away mission today! There’s always plenty of excitement ship-side, of course, but I joined Starfleet to seek out NEW life and NEW civilizations; you only get that on the ground! I have to say, though, this is one area that the academy oversold a bit: it was incredibly dull. Everything went smoothly… no miscommunications with this new race, no accidental insults, no problems. Not bad for a first assignment, just… routine. Ah well. “Be careful what you wish for,” as they say…

Personal Log, Stardate 5921.5: It’s been four months now, and Starfleet is proving to be fairly dull. After my first few away missions, the captain has been calling for me to join more and more of them; he calls me his “good luck charm.” Not sure how to take that… or why he’d need the luck. If this is what life is like on the frontier, I should have stayed back on Earth.

Personal Log, Stardate 5921.9: I haven’t wanted to comment before now, but I think my fellow officers are starting to treat me oddly. I can’t compare notes with anyone else my rank in operations; they seem to come and go before I can get to know any of them. Not sure why I haven’t been getting promoted with my spotless record…

Personal Log, Stardate 5922.1: Had to have my uniform tunic replaced today. Again. The purser couldn’t believe that it had lasted this long, and made some offhanded comment about the “red shirts being disposable.”

Personal Log, Stardate 5923.4: Now I know it’s not just in my mind. The senior staff have been giving me the craziest looks. “Six months… seriously?” they ask each other when they think I’m out of earshot. I don’t get it.

Personal Log, Stardate 5926.3: Haven’t been able to write in some time. I go on away missions constantly. Sometimes they won’t even let me carry my phaser. Thank heavens for those self-defense classes. Also, what the heck is a “Mugatu?” Mugato? Gumato? Whatever, now I can say that I’ve wrestled one.

Personal Log, Stardate 5927.9: I would almost swear that I heard the captain himself refer to me as either a “coward” or a “freakish miracle thing” on multiple occasions.

Personal Log, Stardate 5928.1: I’m being transferred. I didn’t ask for it, and I don’t understand it, but it’s an incredible honor: I’m being sent to serve aboard the Enterprise. My captain says I’ll “meet” my “destiny” there. I guess that’s good? Starfleet is strange.