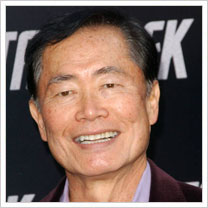 In a recent interview with The Detroit News, George Takei, the actor who is most famous for playing the original Hikaru Sulu in Star Trek answered a few questions regarding his history with the franchise and its future.

Below is an except from the interview.

“Gene Roddenberry said the Starship Enterprise was a metaphor for starship Earth. The strength of the starship lay in its diversity and coming together and working as a team.

“Interesting thing about Gene Roddenberry: He really believed in that philosophy. And he really embraced all cultures, all religions.”

When Roddenberry married Majel Barrett, they “flew to Tokyo and decided they were going to have a classic Shinto ceremony.” He hired a documentary filmmaker to film the preparations, Takei said. They honeymooned up and down the country. They came back and showed the film and had a big party.

“He really embraced that philosophy that you saw on ‘Star Trek.'”

What’s the best thing about being part of that legacy?

“I’m proud of that legacy. It’s a very positive contribution to television, and it’s become a landmark in television history. And to be associated with something like that is an enormous asset to an actor.” With its enormous popularity, it’s also been a great commercial asset, he said. While some actors have said they felt “trapped,” ” I prefer to see it as a great asset than can be parlayed. I’ve done plays totally unrelated to ‘Star Trek’ up and down Great Britain. I’ve played Japanese soldiers, Chinese emperors, a wizard. But when I come out of the stage door, there are all these ‘”Star Trek’ fans with their books, their action figures – all that memorabilia.

My fans are very loyal. It’s been a great professional asset, as well as a source of personal pride.”

How was the original series different from working on the later movies?
“We had a bigger budget. We had more time to film. The scope was bigger, grander. The ones that were most successful had the same core values ” diversity coming together, viewing our human destiny as a positive one.”

Many films show the future as a failed civilization, Takei said. “Rather than that negative view of the future, ‘Star Trek’ always said if we were confident of our problem-solving capabilities … we will have a bright destiny. Always challenging, but that’s what life is. We will always prevail, and we have the capacity for that.”

How did John Cho do as Sulu in the J.J. Abrams version?

“I am now looking forward to the golden anniversary of ‘Star Trek.’ It’s only five more years.”

“The American Cinematheque had a screening of ‘Star Trek II,’ and they asked me to do a Q&A after that screening. When it started, as all those titles came on, so many of the people we worked with, many who became dear friends: DeForest Kelley (McCoy), Jimmy Doohan (Scotty) — I call him my favorite drinking buddy — Merritt Butrick (David Marcus, Kirk’s son) …

“It was so touching when their names came up. When you talk about celebrating the 45th anniversary, you’re reminded of the people we’ve lost over the years. When I say the next five years, I think of the same thing. What else is going to happen in the next five years? Because we’re all reaching that point of mortality.

“There’s a whole demographic that was born after we were cancelled. It’s the cycle of life.”

A full transcript of the interview can be found at The Detroit News website.

In this article:George Takei, JJ Abrams