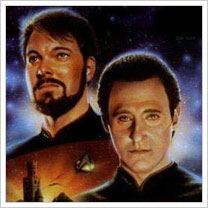 A few weeks ago my fiancée and I were shopping for used Star Trek books. We found a little “friends of the library” shop with 25¢ paperbacks and hit the jackpot: DS9 and TNG novels! We both loaded up (buying two identical copies of a DS9 story in our frenzied zeal) and it wasn’t until we got home that we really looked at what we’d purchased… and boy, was I surprised by this little treasure:

Allow me to present Here There Be Dragons, Star Trek: The Next Generation Novel #28, written by Mr. John Peel. Now, before I go on, most of you are probably wondering: “Does his fiancée really go looking for used Trek books with him? Is he actually the luckiest man alive?” The answer is yes, she does and I am. The rest of you are thinking, “yeah, he’s super-lucky… and the name on this book’s cover makes me think a British spy wrote it… but what else is there to get excited about?” Apparently that little castle in the corner reaching for Riker’s epic beard didn’t clue you in, so let me hit you with some KNOWLEDGE (courtesy of the book’s back cover):

Penetrating the cloud, the Starship crew is shocked to discover a world of knights and serfs lifted right out of Earth’s Middle Ages. Ruthlessly exploiting the planet is a ring of interstellar trophy hunters preying on the immense, native dragon-lizards, twenty-feet tall and armored like tanks.

See, Agent Peel isn’t just using that cliché for a title to grab your attention; no, he’s more Pro than that. He has the crew of the Federation’s flagship straight-up fighting dragons. Or riding them. Or teaming up with them to defeat Galactus, Devourer of Worlds. I don’t know. I haven’t actually READ this book yet. I’m too in awe of it, afraid it won’t live up to the images that cover conjures up in my head. I’m honestly a little intimidated… although that’s mostly due to the front cover’s nasty case of Creepy Data Smile.

When you watch Star Trek, especially earlier episodes (of almost any series), it can sometimes be painfully clear that you’re watching a television show. Some of the immersion is lost when Picard beams down to Planet Cardboard Sky, or when Data drags the Enterprise out to help a little alien girl with an auto-tuned voice and bad prosthetic pinky-fingers. The budget for the effects just isn’t there. When you read the books, though, that’s not an issue; all the limitations on alien design and such go out the window at high warp. I read one book where the crew of the Enterprise-D picked up a scientist who turned out to be a dolphin in a hover-bubble, and then they cruised over to the Mirror Universe to read Shakespeare. And now John Peel (Agent of MI:6) has written a book with dragons and Predators in it!

If you’ve never read any Trek novels, give them a shot; they’re fun, they’re funky, and they’re better than the current TV iteration (Star Trek: Nothing-Because-We’re-Waiting-For-Another-Movie-and-I-Can’t-Afford-the-DVDs). Promise me, though, that if you begin with Here There Be Dragons you won’t spoil the ending for me. I’ll get to it eventually.