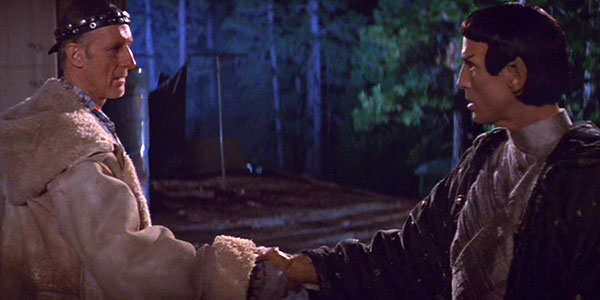 …to explore strange new worlds, to seek out new life and new civilizations…

These immortal words stand as a testament to why Star Trek is one of the best science fiction genres of all time. While sci-fi tends to focus on the bad aspects of alien life, such as H.G. Wells’ classic War of the Worlds, Star Trek is famed for its spotlight on peacefully contacting other civilizations, sharing technological and cultural knowledge, and building friendships. Star Trek sets itself apart from all the rest by showcasing aliens in a peaceful light, rather than a violent one (of course, that doesn’t mean we can’t have a little fun from watching space battles involving the Borg and the Dominion). The big question of the day, however, is whether or not life can exist on other worlds, and if so, what kind of life should we expect to see: a technologically advanced civilization or single-celled organisms?

In order to evaluate the probability of life existing elsewhere in the universe, one must understand the origin and evolution of life; more specifically, one must examine the scientific theories of abiogenesis and evolution and what they mean for life in general. Before we begin, let’s get one thing straight: evolution is not the same thing as abiogenesis. While they are related and the same rules can apply to both (i.e. natural selection), evolution pertains to the diversity of life and how it changes over time, whereas abiogenesis is simply the origin of life from non-biological sources. For matters of simplicity, I’m going to discuss the abiogenesis aspect; the beginnings of life is just as important as, if not more than, the evolution of simpler organisms to more complex ones (i.e. from bacteria to humans).

The Theory of Abiogenesis is an attempt by scientists to rationally explain how life could have developed on Earth. It claims that life originated from inorganic sources (like carbon dioxide, hydrogen, ammonia, and water). The most likely mechanism of such origin is the reduction of carbon dioxide in the presence of ammonia, water, hydrogen, and sulfur dioxide. Such a reaction is known to generate amino acids, fatty acids, nucleic acids, and other biologically important organic molecules (the Miller-Urey experiment confirms this). This carbon-, ammonia-, and water-based mixture is very relevant to life on Earth because it was the composition of Earth’s atmosphere nearly 4 billion years ago; if a few scientists were able to reproduce organic bio-molecules in a “test tube” using this same mixture over the course of a few weeks, imagine what could have developed on Earth with an abundant source of energy from the sun, hydrothermal vents in the ocean, and electrical discharges in the atmosphere over the course of a billion years.

The next step is the formation of organic polymers from these amino acids. Amino acids culminate to form long peptide chains (in other words, proteins). Different amino acid sequences produce different functions, such as catalyzing a biologically important reaction to generate energy or even maintaining an appropriate cellular pH—all necessary for the maintenance of life. Most random sequences are useless and really wouldn’t do anything, but small, simple sequences with amino acids in just the right places are sufficient to produce positive effects for a living organism. 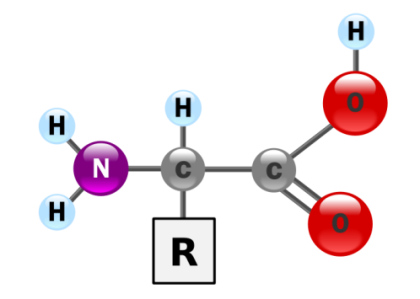 The basic structure of amino acids: the alpha-carbon (the central carbon) is chemically bonded to an amine (the nitrogen group with two hydrogens on the left), a carboxylic acid group (the carbon group with two oxygens and a hydrogen on the right), and an R group which is unique and different for each type of amino acid (some are acidic while others are hydrophobic, some are positively charged while others negatively charged). 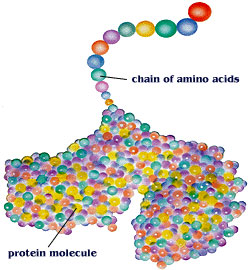 A protein is a chain of amino acids folded on itself to generate a specific structure. Depending on its structure and the sequential orientation of the amino acids, this protein can adopt a certain biological function.

Hemoglobin, the main protein found in red blood cells, consists of a specific amino acid sequence that gives it the molecular structure and functionality necessary to carry oxygen to the peripheral cells in the human body. It is highly unlikely this protein could have developed in pre-biotic Earth because natural selection didn’t favor the amino acid sequence that gives rise to this protein…yet. One would have to wait a few billion years before oxygen-breathing animals required a protein with this kind of functionality for natural selection to favor it.

Our look at the possibility of alien life will continue tomorrow in a second installment of Science Fiction or Science Fact. Stay tuned!