Most of us have heard the old Reese’s slogan “two great tastes that taste great together,” and we can all think of examples that support it. Peanut butter and chocolate. Peanut butter and jelly. Peanut butter and a dog that eats said peanut butter. Car chases. The list goes on. The killer combo I want to talk about today, though, is NOT peanut butter related; I’m talkin’ Star Trek and comics (specifically webcomics). It’s something I’ve wanted to talk about for some time; when a good friend sent me a link to Randall Monroe’s XKCD today, I knew the proper time had arrived. Starting with Mr. Monroe’s work, here is a (brief) list of some webcomics that have crossed paths with Star Trek…with humorous results.

Described by the author as “a webcomic of romance, sarcasm, math, and language,” XKCD is certainly a thinking-person’s strip. The art style is incredibly simple, but the writing is anything but. The strip I’ve linked to here is a funny take on a classic TNG episode, and was indicative of the kind of humor the strip usually has on display. The comic may occasionally contain strong language, and always contains some combination of sci-fi, pop culture, higher learning, and advanced mathematics.
View on XKCD 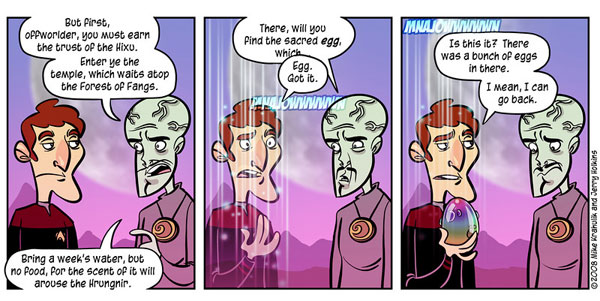 “Strong language” doesn’t begin to describe the kinds of profanity Jerry Holkins and Mike Krahulik put in their strip, so be careful with the archives on this one. The linked Trek strip is alright, though, and is a great look at how Star Trek: Online would have to differ from World of Warcraft. Penny Arcade is probably the most famous webcomic on the list, skewering videogame culture and other pop cultural icons for more than a decade. References for Star Trek pop up throughout the series (even during zombie attacks, so there’s more fun to find… just watch out for all the $#!+.
View on Penny Arcade

This one definitely contains strong language, so if that sort of thing offends you, skip the links. I haven’t read as much of Eoin Ryan’s offbeat comic (which reminds me a bit of The Perry Bible Fellowship), but I’ve managed to catch a few Star Trek themed strips and they’re always hilarious… although I don’t think Geordi’s VISOR works quite the way Ryan depicts it.
View on Space Avalanche

I can’t think of an instance where Kris Straub’s “completely accurate portrayal of the future” references Star Trek, and it’s not meant to BE Star Trek, but the HUGE influence of Trek on the creator of this strip is hardly a secret. If you’re looking for more than a simple one-off reference and want to read a webcomic that really feels like a humorous take on the Trek universe, read some Starslip in the archives.
View on Starslip

I may be a bit biased, since I love me some Star Trek and I love me some comics, but I think when the two come together hilarity ensues. I hope to touch upon this topic again in the future; after all, I didn’t even get to talk about the time when Captain Kirk met the X-Men.