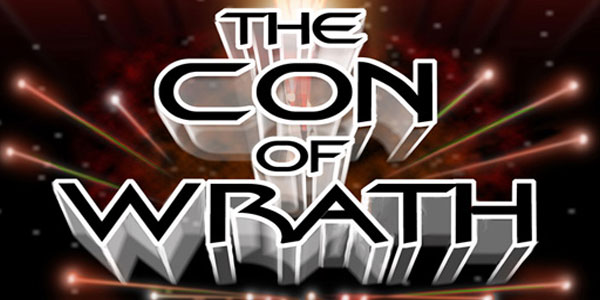 Star Trek author, editor, archivist, consultant and producer Larry Nemecek has a new documentary project on the horizon. The documentary entitled The Con of Wrath is an inside look at “Ultimate Fantasy” an infamous 1982 convention which took place in Houston, TX.

Cameras roll on a bit of Star Trek history:
THE CON OF WRATH: From meltdown to miracle!

LARRY NEMECEK and MYSTAR MEDIA, in association with SWORD & CIRCUITRY STUDIOS and BAMBOOSHED PRODUCTIONS, announces the production of “THE CON OF WRATH”: the story of the first rock-star Star Trek convention-turned-disaster—and how L.A. stars, local staff and simple fans alike saved the show. And survived anyway.

Back when there was only one STAR TREK…just one storied cast…and a fandom yet to write the book on pop culture juggernauts…came the ULTIMATE FANTASY.

Star Trek author-historian Larry Nemecek takes on the role of producer for the first time to spotlight how this early-day “dream convention” instead turned into THE CON OF WRATH— and now lends its nickname to the title of a documentary that re-examines the saga of that 1982 Houston weekend, in the voices of those who had front-row seats—including Hollywood star trekkers like Walter “Chekov” Koenig and producer Harve Bennett, among the L.A. heroes.

It was supposed to be the granddaddy of all Star Trek conventions, a glitzy rock concert of an event planned to truly go where none had gone before—complete with laser shows, orchestral oomph and a revolving stage in Houston’s NBA-sized arena. Instead, fans got the mother of all meltdowns—and, numbering in the hundreds, rather than thousands, gave it the nickname that itself was a takeoff on “The Wrath of Khan,” the hit Star Trek movie sequel released only days before.

“It’s a universal ‘riches to rags to riches’ story,” Nemecek says. “There have been big fan conventions, and big convention failures, but never anything like it before or since. When turnout numbered in the hundreds, not thousands… well, like a train wreck, it was almost impossible to look away.

“The legendary Star Trek cast proved to be heroes off the screen as well, after they all decided to stay and make a stand—joining staff, vendors, and fans from all over in making sure this show must go on, too.

“These circles within circles each reacted and dealt with the fiasco in their own way, not only surviving but salvaging the experience for those who were on hand,” Nemecek says. “And along the way are a lot of great stories.”

Archival film footage, artifacts and stills will help tell the story, along with visits to the scene today and the memories of everyone involved on all sides. Cameras are already rolling on the first memory sessions, including the actor celebs.

Fans can also add to THE CON OF WRATH in two ways:

— “Survivors” from the 1982 debacle now scattered all around the country will be able to submit their own memories of the weekend via home video for possible use on-screen. “If you have a great story from that weekend, we want to hear from you!” Nemecek adds.

–AND: All fans who would like to help, can now support the film with grass-roots fundraising can donate online now at levels from $10 to $1,000 and take home one or more souvenir premiums. See the short introductory video and the donation link up NOW at conofwrath.com!

These and more details will be rolled out in coming weeks online at conofwrath.com, as well as The Con of Wrath on Facebook page and Nemecek’s Treklandblog.com.

Larry Nemecek, author of The Star Trek: The Next Generation Companion, Star Trek Magazine columnist and longtime editor of Star Trek Communicator, most recently appeared in Biography Channel’s The Captains of the Final Frontier two-hour special. Larry shares his years as Star Trek author, historian, project consultant and insider at fan conventions and on larrynemecek.com. Check out his commentary and his original video chats with all your favorite Treklanders at his own Treklandblog.com, plus @larrynemecek on Twitter and Larry Nemecek’s Trekland on Facebook. As a performer, he can be seen June 1 in the new LA Comedy Awards-nominated British online series, “Divine White’s Introduction to Hollywood.”

We’ll have more information on The Con of Wrath as it comes available, here on TrekNews.