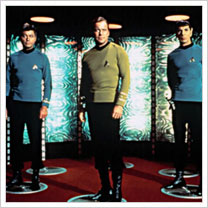 No one, not even Trekkers, can ever forget Captain Kirk’s famous catchphrase, “Beam me up, Scotty,” which, despite its popularity in science fiction culture, was never actually spoken in The Original Series.

Nevertheless, virtually every Star Trek episode featured the site-to-site transporter: teleporting an away team to a nearby planet, landing Jem’Hadar shock troops on the Defiant after their shields were brought down, or even in a desperate evacuation attempt to rescue a whole population from an advancing armada of Borg cubes. It is one of the few technological themes of Star Trek that distinguishes it from similar science fiction series, like Babylon 5 or even the Star Wars movies; while transporter technology is certainly an interesting quirk of Star Trek and it holds promise for a future society graced by the fortitude of scientific knowledge, is it truly possible to teleport someone through space and making him/her reappear in a different location almost instantaneously?

The transporters of Star Trek have consistently been described by characters on the shows as being a device that converts matter into energy and back into matter; more specifically, the precise arrangement of atoms and molecules at the quantum level in an object (say a human body) are stored into a computer program or a transporter buffer, then the transporter disassembles the molecules and converts them into pure energy. The energy is sent to a different location where it is assembled back into matter using the information stored in the transporter buffer to put “humpty-dumpty back together again,” with all the right atoms in all the right places. Unfortunately, analyzing the credibility of transporters is much more difficult than it was for faster-than-light travel and cloaking devices because no one has really devoted as much time and effort to the theory and experimentation of teleportation (mainly because our technology simply isn’t good enough…yet). Therefore, my analysis will be limited to mass-to-energy conversion and information sciences as we understand them today.

When transporting a human person, for example, one must be able to take apart the person atom by atom, transform those atoms into energy, and put the atoms back together in a different place. The replacement of these atoms and molecules in their appropriate orientations is crucial to a successful transport; otherwise, this would happen:

That is a lot of computers, but perhaps in the future, technology will allow us to compact information much more easily. The problem here is not our given level of technology, but rather the physical laws that govern the quantum mechanical world, which is why the physics of transporters are a little harder to reconcile.

The Heisenberg Uncertainty Principle states that it is impossible to determine both the position and momentum of a quantum particle, such as the electron, regardless of any technological ability to attempt such determination. One can precisely locate all the atoms and subatomic particles in the human body, although their energy levels, momentum, and electron spin states are much more difficult to determine. Conversely, one cannot precisely determine their locations after having determined the momentum of each electron. It is necessary to know BOTH in order to correctly reassemble the quantum particles in their original momentum and locations in order to appropriately rematerialize a human being. It follows from this conjecture that transporting a human is impossible without changing the laws of physics…unless you have a Heisenberg compensator, the sci-fi gimmick employed on Star Trek to circumvent quantum mechanics and ignore the Uncertainty Principle in order to use transporters. Is the concept of a Heisenberg compensator even plausible? The only answer is: NO, NO, NO, and NO!…but it’s a good effort.

The next technological feature of transporters is disassembling a human being at the quantum level and converting all the matter in one’s body into pure energy. Technically, scrambling the molecules in one’s body is no different than killing the person; putting the quantum particles back together to reform the body is, for lack of a better word, resurrecting a dead corpse. This begs the questions: does the transporter actually kill the person being transported, and if so what comes out at the other end, a perfect clone of the transported person or a dead body?

In this excerpt from an episode of The Universe, scientists evaluate the transporter technology and whether or not transporting a human actually teleports him/her from one place to another or if the person is killed and replaced by a “perfect quantum replica.” There is no need to watch the entire episode, though it’s very informative and entertaining; from 4:06 to 5:00, scientists discuss how the transporter may theoretically kill the person being transported, then “resurrected” after rematerialization.

For all intents and purposes, let’s assume that successfully scrambling the molecules in one’s body and converting that person into pure energy doesn’t kill him/her and that one can feasibly determine the precise location and momentum of quantum particles in the human body (which is impossible, by the way). In order to transform someone into pure energy, one must make use of Albert Einstein’s famous relativistic equation:

which states that mass (m) and energy (E) are equivalent via the square of the speed of light (c^2). When one converts a human body weighing 200 lbs (or 90.7 kg) into pure energy, the energy is equal to the body’s mass multiplied by the square of the speed of light. For a 200-pound body, mass-to-energy conversion would generate approximately 8.17 x 10^18 J, which is an amount of energy equivalent to 130,000 times the destructive power of the atomic bomb dropped on Hiroshima, Japan during World War II. Even if scientists and engineers could ever develop technology with the ability to convert mass into energy, transporting multiple groups of humans and heavier objects may overload computer circuits.

Assuming future technology can handle the amount of energy, the energy would have to be transferred to photons (wave-like particles of light composed of “mostly” energy). This requires the use of an additional equation, this time from quantum mechanics instead of relativity:

where E is the energy of a photon, h is Planck’s constant, c is the speed of light, and λ (lambda) is the wavelength of the photon.

Assuming mass can be converted into photonic energy at 100% efficiency, one can determine the wavelength of the photon that carries this energy from one location to another at the speed of light by algebraically rearranging the equation to solve for lambda. The wavelength of the transporter beam is about 2.4 x 10^-44 meters. To put this into some perspective, the most powerful form of electromagnetic radiation currently known to exist are gamma rays (the type of radiation produced by nuclear reactors) with a wavelength on the magnitude of 10^-12 meters, which is 32 magnitudes of 10 weaker than the transporter beam; anything with a shorter wavelength, higher energy, is not yet known to exist.

Photons produced by our transporter would be so powerful that they may actually disintegrate “anything” in its path, which shouldn’t be surprising considering we converted 130,000 atomic bombs into a stream of light. A ship-to-ship transport might actually destroy the receiving space vessel, including the person or persons being transported. In hindsight, even if transporter technology is not applicable, at least we know how to make a very powerful ray gun.

Until scientists can ever develop the means to safely handle this kind of energy (which is unlikely, though not impossible), the future of transporter technology is looking very grim right about now.

Did someone forget to boost the carrier wave on that transporter signal? Because the only thing I got on my end was Science Fiction. Unfortunately, this rating was determined on a lack of scientific information regarding the mechanisms and theory behind transporter technology; any conception of a plausible transporter device requires much more work and theorizing before it can become a reality. By our current understanding of physics and information sciences, the concept of the Star Trek transporter does not seem realistic. Nevertheless, this doesn’t negate any possibility that transporter technology will be made available at least in the far future.
Quantum physicists are working on a physical phenomenon known as quantum entanglement. Experiments show that when photons are released from an energy source, then split off into two more photons, each new photon has the same, but opposite, physical properties as its respective, co-dependent photon.

Quantum entanglement is a phenomenon of quantum mechanics to which Albert Einstein referred to as “spooky action at a distance.” One of the far reaching implications of this observation is that two different particles created from the same source can interact with one another, even when separated by light years. Here is a fun video describing quantum entanglement:

This diagram demonstrates the effect of quantum entanglement and what it means in terms of teleportation. Imagine an experimental setup in which two photons (B and C) are entangled. A third photon (A) is also entangled to one of the previous two photons (B). Influencing A influences B, which in turn influences C. Even though A and C were never entangled, A transfers a “teleported state” to C through their common entanglements with B. In a sense, one is instantaneously creating a new particle virtually identical to the first particle; this is the essence of teleportation on the quantum scale and it is known to occur. Can this be done on the macroscopic scale (involving a human)? Probably not, and there isn’t enough information to make that determination yet.

As a biochemist myself, I am not the final authority on transporter technology. In my opinion, the ability to teleport one through space is not impossible, but I must be conservative in science and maintain the contention that it probably won’t happen. I leave the final say in the matter to Professor Lawrence Krauss.