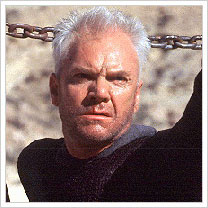 Malcolm McDowell, the actor who played Dr. Tolian Soran, the character who killed Captain Kirk in Star Trek: Generations recently sat down for a two-part interview with StarTrek.com. During the interview McDowell talks about the opportunity to play Dr. Soran, Marlon Brando, the 40th anniversary of A Clockwork Orange, and more.

Let’s talk Star Trek. What was your immediate reaction when presented with the opportunity to play Soran in Generations?

McDowell: I thought, “Well, this is a good part.” I think that’s what I felt immediately. I didn’t know until I’d read the full script that I was going to be the one that killed Kirk. Bill Shatner is a force of nature, is he not? I enjoyed him. I think he’s extremely talented. And I honestly feel that those other casts that came after should collectively get down on their knees and bow to him – and to Leonard (Nimoy) and to all those original guys – because they kept the franchise going when there wasn’t much money around and they were just little morality tales. They did a brilliant job, I think. Anyway, when they came to doGeneration with Patrick (Stewart) and all of them, The Next Generation was a damn good show. People love Star Trek. So I was happy to say yes.

Had you heard the story that the producers initially reached out to Marlon Brando to play Soran?

McDowell: No. That would have been interesting, had Brando done that. Very interesting.

So what interested you most about Soran as a character?

McDowell: Well he’s a megalomaniac and a fun character to play. Also, visually, I loved the black clothes with the white hair, spiked up. I think that’s the first time I spiked my hair up like that. I had a wonderful hairdresser on that film and I can’t remember her name, but she changed the whole look for me. But she was great and I loved her. And Mike (Westmore), the makeup man, was brilliant. I did say, though, “If I’m going to play this part, I don’t want a scar. I don’t want to look like a mutant. I’m not getting up at four in the morning to get in makeup.” They said, “That’s OK, then. We didn’t want that.”

What do you remember of the shoot?

McDowell: I just remember being stranded on a mountain outside of Vegas for weeks, in excruciating heat. But they were such a great crew and I met John Alonzo (who passed away in 2001 at the age of 66), who was this great cinematographer. He’d hand-hold these bloody cameras. And what an artist he was. I liked (director)David Carson, (but) he just did so many takes, so many set-ups. I’d go, “My god, how many more set-ups do you need of this scene?”

To this day, you’re often referred to as the “man who killed Kirk.” What were your thoughts on how that sequence in the movie played out?

McDowell: Pose this one for me (to the powers that be): If you have – which they had – this icon of American television, why the hell didn’t they give him a spectacular death? Why did they give him such a really paltry death? Me shooting the bridge out or some BS whatever it was? They should have sent him off in a glorious fashion, and they didn’t. They missed an opportunity.

In this article:Interview, Malcolm McDowell