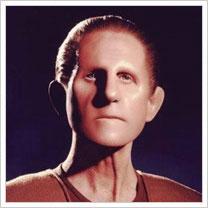 Rene Auberjonois, star of Star Trek: Deep Space Nine who played the shapeshifting Security chief Odo on the show, sat down for a two-part interview with StarTrek.com.

On paper, in the Deep Space Nine series opener,“The Emissary,” who was Odo? And who was he by the very end, when the credits rolled on “What You Leave Behind”?

Auberjonois: The day that (DS9 executive producer)Rick Berman called to welcome me to the Star Trekworld, he said something like – I don’t remember the exact words – “This character is like Pinocchio.” And I thought, “Well, that’s interesting.” And, over time, I came to understand that that was a certain aspect of the character. He was a very unformed being. Just as Pinocchio was wooden, Odo was a mass of liquid, really, and he was trying to get some kind of shape to his life and to who he was and he wanted to answer the questions he had about what his role was meant to be in that particular universe. People used to say to me early on, “Oh, I hope Odo finds out where he’s from and who he is,” and I’d say, “Gee, I hope not. I sort of love the mystery of it.” But then, of course, I wasn’t one of the writers. So I had nothing to do with that. I was simply the instrument to play the music that the writers had come up with. And we did learn, over time, so much about him. His relationships with Kira (Nana Visitor) and with Quark (Armin Shimerman) and with everybody, really, all made him more and more identifiable in human terms.

So, where I thought in the beginning that I didn’t want to know where he was from and loved that it was a mystery, I also loved the fact that when we got a script – one that focused on Odo and his world – I’d learn something new that I didn’t know about the character. I would have to ingest it and incorporate it into this character that was being built over seven years. I’ve never really sat and talked to Rick or Ira Behr about it, but I would venture to say that a lot of the things that happened to Odo, they would not have been able to tell you at the beginning of the journey that that’s where the journey was going to go. That is one of the delights of getting to play a character for seven years, the organic nature of the work. It wasn’t prefabricated. It wasn’t a mold. I had nothing to do with it, how the show was written or what was going to happen with Odo or what he was going to say. But I had a lot to do with the tenor of the character because, as I said, I was the instrument, and in that sense you have a lot to do with what the music is eventually going to be.

You mentioned the Odo-Kira and Odo-Quark relationships, both of which became cornerstones of DS9. Was it your sense that the writers glimpsed the chemistry between you and Nana Visitor and you and Armin Shimerman, and played to that?

Auberjonois: I have a feeling that they knew the Quark-Odo would be one of the things that would be, not necessarily a cornerstone, but something that they could go back to, that was the kind of relationship between characters that Star Trek fans revel in. I don’t mean to be too obscure, but it’s sort of like of In Mice and Men, when Lennie keeps saying, “Tell me about the rabbits.” He wants to hear the story again. So I have a feeling that there’s an element of that in the Quark-Odo relationship, because it meant the writers could refer to that very briefly and have it have meaning. We’d have tiny little encounters most of the time. It wouldn’t even be scenes. I would walk into the bar to do something else completely, and Quark and Odo would have an exchange, maybe only two or three lines between them, but the audience was so in tune with that relationship that they could extrapolate. And, in fact, Armin and I have commented on it over the years. When people talk about how much they loved that relationship, we’d say, “You know, there was really only one show in the seven years in which it was all Odo and Quark.” That was ‘The Ascent.” Other than that, it was always just short little scenes. But that relationship was so embedded in the audience’s understanding and psyche that it took on a weight that far surpassed how much time we actually spent with each other. So I think the writers knew that Quark-Odo was likely to be a running theme.

Auberjonois: I know for a fact that the writers did not anticipate the Odo-Kira relationship. It happened in the second season, in “Necessary Evil,” the flashback episode with Odo investigating a murder on Terok Nor, and in the end, in present time, he understands that Kira was responsible for this, that she was an underground fighter. The writers wrote in that scene at the end that they were in Odo’s office and he looks at her. I can’t remember the exact words of how they described him looking at her, but it was clear that he understood that this person who was his only real friend on the station has betrayed him in some way. I don’t know what it was that I did or if it was how it was shot, but the next day, when they were looking at the dailies, the writers said, “Oh my God, look, Odo loves Kira.” And they went with that. Both Nana and I, when that started to become a theme, went, “What? Oh my God, look at that. Isn’t that interesting?” Ours is not to question why as actors. So we went with it. We loved working with each other, Nana and I. We still love working with each other. We have tremendous respect for each other as actors and we’re very comfortable working with each other.

By the end of the series, Odo saved his people, said farewell to Kira and entered the Great Link. How satisfied were you with the conclusion of the storyline? Of the Odo character arc? And was there anything that, in the seven years, never went answered or that you’d wanted to play, but didn’t get the opportunity?

Auberjonois: If anything could be called inevitable in a series as out-of-this-world as Deep Space Nine, that was inevitable. The one thing I knew, by the time we’d explored the relationship with Kira and started to know who the Founders were, was that that had to be the way it was going to end for them and for Odo specifically. So I was completely satisfied with it because I thought, “This is the way it has to be.” It’s the classic, poignant ending. It’s people making great sacrifices for the greater good. And while I may say that the writers didn’t anticipate that he’d be saying goodbye to Kira in the end, I have a feeling that in the large scheme of things the writers knew that they’d eventually be saying goodbye to Odo, that he’d be returning to the Great Link. That was the very purpose. It’s why he was sent out by his “people.” He was sent out on a paranoid mission to protect them, to be an advance guard, to be the canary in the mine, so to speak. So it just had to be that he would ultimately be the creature that would return to his world to bring it back to sanity and to stop this terrible paranoid destruction. So I thought it was perfect, it was great. And, not to talk out of school, but if you talk to Armin, he might have a different take on how Quark’s story resolved. Everybody had their own take on how, “Oh, is that how my character…? Is that where I…?” But for Odo, it was exactly the way I would have done it myself if I’d been writing it.

When was the last time you actually watched an episode of the show?

Auberjonois: You hear that silence? (Laughs). I don’t watch television. When I finished Benson, I never saw another episode of it. I’ve never seen an episode ofDeep Space Nine since we finished shooting it in 1999. That’s almost 12 years, and I’ve never seen an episode. That’s not out of a lack of interest. I’m not particularly fond of watching myself act. I think because my roots are in the stage that the joy for me is the act of doing it. The joy for me is not sitting down and watching me do it. I’m so critical of myself. I’d sit and watch myself in a scene, maybe one in which I’m just in the background, and think, “What are you doing back there, Rene? Why are you doing that? Why didn’t you just stand still? Shut up. What’s the matter with you?” It’s not that I’ve avoided Deep Space Nine. I’ve passed it when flipping through the channels to get to The Daily Show with John Stewart, which is my only television habit. When that happens, I’ll stop and pause for a few moments, whether or not I’m in the scene, to watch it for a little bit and get a sense of how it’s aging. With that said and having undermined my own argument, I suppose, what I’ve seen has aged very well, like a fine wine. I always thought that would happen.

The complete interview is available over at StarTrek.com.

In this article:Interview, Rene Auberjonois