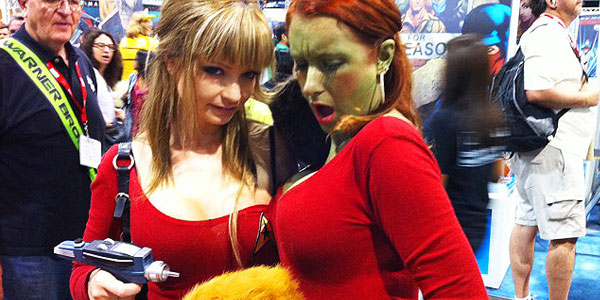 As most of you are probably aware, “Convention Season 2011” is in full-swing. This weekend I’ll be heading to the Frank & Son Collectible Show in California for their annual Star Trek Day, but that’s just the beginning. With the official start of summer less than two weeks away (and a handful of Trek gatherings already behind us), it’s high-time for the convention-goers among us to pull our ‘fleet uniforms out of our closets, dust off those tricorders, and set phasers to… wait a moment.

Wait. What’s that? You’ve never BEEN to a convention before?

You say you’re not sure what to expect, but you’ve seen the Comic-Con coverage on TV and you know enough to be terrified? Worry not, friend. TrekNews and Federation Follies have your back.

Note: TrekNews had your back before this silly article; check here for a list of upcoming Star Trek conventions.

To start, let’s define the term “convention.” According to the online Merriam-Webster Dictionary, a “convention” is described as “an assembly of persons met for a common purpose.” Everyone at a Trek convention is there for the same reason, and that leads to a friendly and welcoming atmosphere. That reason?

Some important things to keep in mind:

Admission Prices
Seems obvious, but always check on that. You’d be surprised how many of these things don’t accept “the economics of the future is somewhat different” or “we work to better ourselves” as valid reasons to let you in for free.

Parking
Parking at conventions can be difficult. If simply transporting down isn’t an option, be sure to arrive early for a decent (read: any) spot. Not to imply that anyone might be embarrassed by the prospect of walking sixteen city blocks from their car to the convention center in full Borg costuming and gear, but… you know. It’s summer, it’s hot, and not all local law-enforcement officers are as hip as some.

Food
Go ahead. Try the food they serve at these things. I dare you. You’ll be praying for racht… but you won’t have any money left. Speaking of which…

Klingons
Don’t make ’em mad (see title image). Sure, you might think it’s funny to drop a slip of latinum in their cup while they’re singin’, but… just don’t do that. The food is safer.

Swag
Bring a bag. Bring a couple of bags. Possibly a truck. If you’re like me and you grab every free thing they hand you, you might also want to price personal storage options (if my fiancée is reading this: Honey, I apologize in advance).

Parking
Did I complain about parking already? I HATE PARKING AT THESE THINGS

Personal Space
You won’t see any at a convention. Bring hand sanitizer.

Tribbles
Avoid taking them home. Seriously, the ones they sell there don’t seem to breed ever, let along non-stop. Zero value for your convention dollar.

This is just the tip of the iceberg, of course; there’s so much more to conventions. Be sure to check back in with TrekNews in the coming months for more on this fun and fascinating side of Star Trek Fandom, but for now just remember: Honestly, transporters.