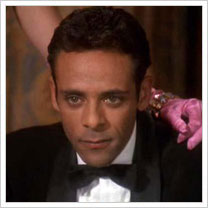 Some of you may recall that, about a month ago, I was completely losing my marbles over the amazing possibilities presented by the Star Trek: The Next Generation novel “Here There Be Dragons”. After all, a Star Trek book with dragons is pretty much contractually-obligated to be mind-blowingly amazing, right? Well, I finally worked up the nerve to start it, and let me tell you: even at only forty-six pages in, it delivers… and I haven’t even gotten to the dragons yet.

Ignoring a full chapter of Commander Riker and Alexander fighting “Gigantaurs” on the holodeck, do you know what the first five chapters of this book are mostly about? TACHYONS. It doesn’t get any Trekkier than that, kids. That’s not even my favorite part, though! SPOILER ALERT for those of you who don’t want me to drop (what I’m assuming; I haven’t finished the book) is a Major Plot Development from 1993: during a laughable fight with a pleasure cruiser, the Enterprise picks up CASTOR NAYFACK: (supposed) FEDERATION SECURITY AGENT. Since this great work of future-literature was written by one John Peel (who is obviously a British secret agent), I got pretty dang excited here. It would be like Ian Fleming basing James Bond on his crazy adventures as a spy during World War II. It would be like those DS9 episodes where Bashir is an international man of mystery, except NOT on the holodeck. It would be like O’Brien was actually Falcon! Maybe!

Anyway, I was intrigued. I had to learn more about this guy, and simply finishing the book would have been the easy way out. So I hopped on Google and tried the easier way out… except the internet had very little to offer me. Apparently he was born the same year as Michael Eddington… but you don’t even have a citation for that, Memory Beta? Please. It was becoming obvious that I’d need to take this into my own hands. I copied down the author’s initial description of

“He looked to be in his early forties, and definitely of Terran stock. His thick brown hair hung long about his shoulders, and he had a firm, muscular build. His face was long and lean, his eyes blue and clear. He wore casual clothing, including what looked to be a hunting vest. There were several pockets, all empty.”

… and came up with this: 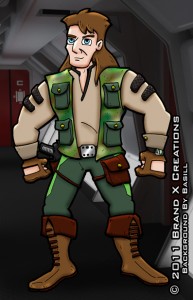 Apparently, CASTOR NAYFACK (whose name I shall always capitalize forever) looks just like Ted Nugent, minus the insanity ‘shades and soul patch. Hmmmm. Not sure if that’s better or worse, honestly.

… but for now I’m off to watch the new Green Lantern movie. I’ll finish the book later.