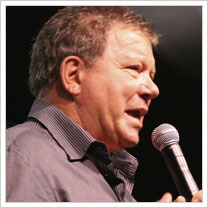 On Saturday William Shatner appeared as part of this year’s Calgary Comic & Entertainment Expo in Calgary Alberta, Canada. When asked on stage about his possible involvement in JJ Abram’s next Star Trek film, Shatner said “I have become an acquaintance of JJ as of late but I’m afraid no, no I will not be in Star Trek 2 I’m afraid.”

Shatner went on to say he was under the impression that filming of the sequel would begin sometime later this summer.