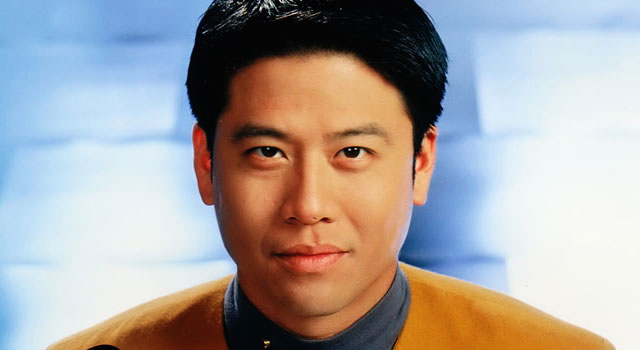 Garrett Wang recently sat down for an interview with StarTrek.com to talk about his time playing Ensign Harry Kim on Star Trek: Voyager. Below is a sampling of the of that interview.

What were your thoughts on the Voyager finale, both in general and specifically in terms of how it closed out Harry’s storyline?

What would you like to think Harry is doing now?

Wang: I would like to think that Harry reconnected with his original girlfriend Libby back in San Francisco, got married and has twin boys named Gabriel and Kenner. Continuing my fantasy world, Harry is promoted from ensign to captain by Admiral Paris. The unprecedented multi-level promotion by the admiral would be based on Harry’s seven-year record on Voyager and also for befriending and looking out for his son Tom, whom he could never show affection to but loved dearly. Captain Kim spends nine months commanding his own vessel, the USS Janeway, the newest Enigma class starship, and three months at home guest lecturing on the wonders of the Delta Quadrant. Kim has picked up golf as his newest hobby, and is always excited to play a round at the closest holodeck.

Building on that, fans have asked us to start asking the actors if they’ve read the Trek books and followed what happened to their respective characters. So, have you read any Voyager novels and, if so, what did you make of Harry’s subsequent evolution?

Wang: I understand that many fans have fulfilled their hunger for Voyager by reading the novels. Unfortunately, I haven’t read any of them. I know that Robbie McNeill used to read Voyager novels to his kids when they were young as bedtime stories. I am interested in how they developed Harry throughout the novels and plan on reading them in the near future.

You were really a kid when you started on Voyager. How do you feel you grew up — as a person — on the show, and how did that carry over once the show ended?

Wang: I was young, 25, when Voyager started, but not the youngest. Jennifer Lienheld that distinction at the tender age of 19. One positive thing regarding maturation that happened from being on the show was the elimination of the racial chip on my shoulder. Eight years in Memphis, TN, being the target of daily racial epithets, made me overly sensitive to the stares and looks of strangers. In college, I had developed an almost militant attitude in that I would respond to prolonged looks by strangers with a defiant scowl or a combative, “What are you staring at?!” I strived to be the complete opposite of the quiet, non-confrontational Asian. Well, once Voyager started, I quickly realized that the majority of the staring was by strangers who recognized me from the show and not active members of some white supremacist group. My time on Voyager also taught me the important lesson of being punctual. The several times I was tardy to work were met by great resistance from the producers. During the third season, they actually threatened to fire me if I didn’t get my act together. Thank goodness I did, ha-ha!

Who from the old days, cast and/or crew, are you still in touch with?

Wang: I’m happy to say I still keep up with all the men of Voyager. We have been meeting for dinner at the same restaurant every three to six months since Voyager stopped filming. It’s great because we get to reminisce about the old days and catch up on current news. Lots of laughter at dinner. The ladies of Voyager, on the other hand, not so much. It’s usually at a random convention appearance that I will run into Kate (Mulgrew), Jeri (Ryan) or Jennifer. Unfortunately, I have only had email correspondence with Roxann (Dawson). Also, I used to meet a couple of the crew guys for golf, but that’s fallen by the wayside now.

Some of your costumes from Voyager sold at auction not too long ago. Were you tempted to buy any, or had you seen enough of them for one lifetime?

Wang: Yeah, I knew about the Star Trek Christie’s auction. Was I tempted to buy one? Heck no! After seven years of blood, sweat and tears working on Voyager, they should have given me one of the 20 some odd Kim uniforms they had in wardrobe. I should’ve followed Kate’s lead and taken my uniform home on the final day of shooting. It always amazes me how many people think that I actually wear my costume on stage at convention appearances. I am definitely relieved that I don’t have to wear it anymore since it pulled in all the wrong places whenever I sat down. If I find out in the future that I can’t have kids because of a low sperm count, I’m calling a lawyer.

The entire interview with Garrett Wang is available on StarTrek.com